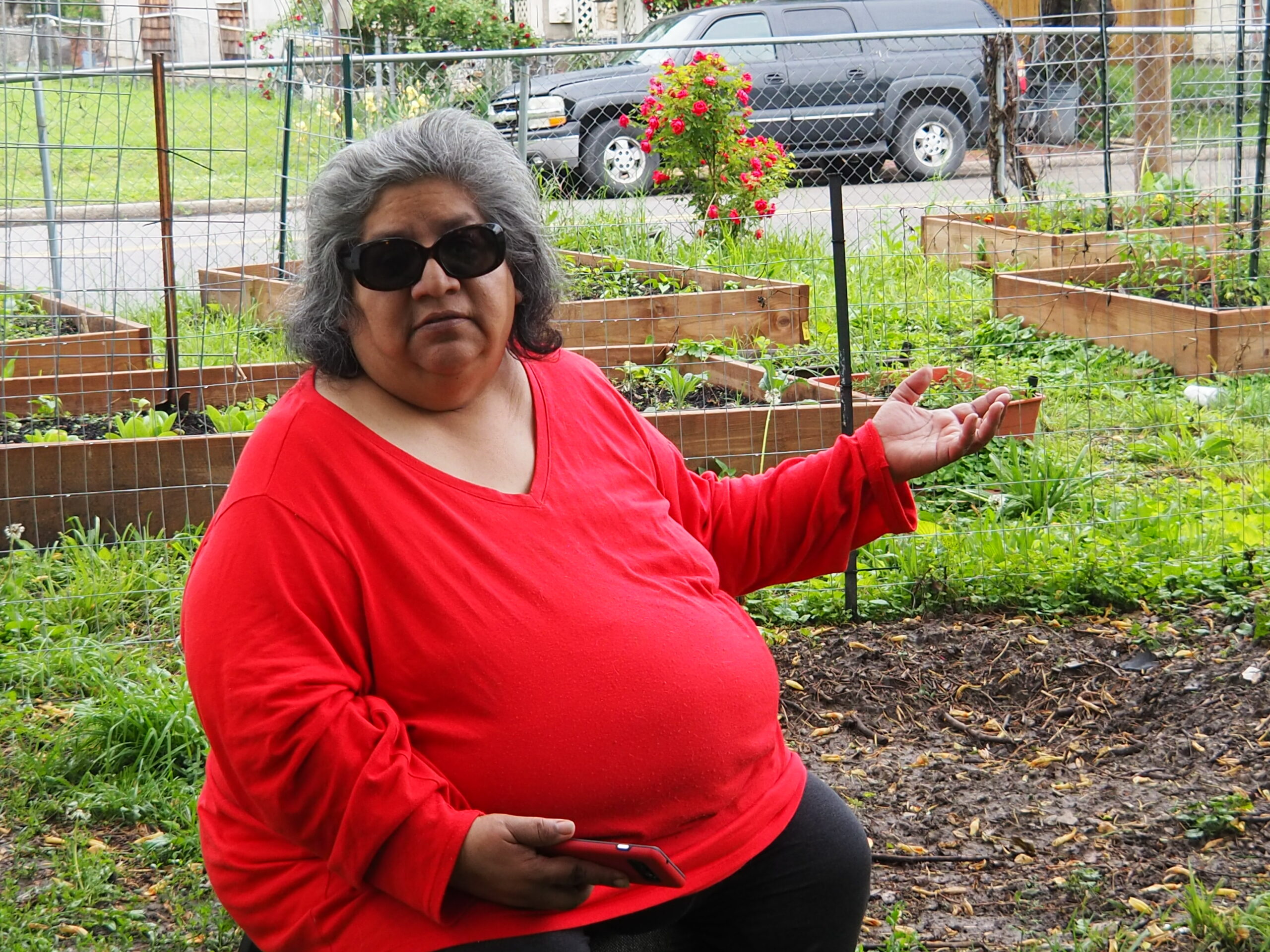 Louise Lynch, a Wyandotte County resident, has struggled to get emergency rental assistance and faces the possibility the Board of Public Utilities will shut off her power and water. (Allison Kite/Kansas Reflector.)

The pandemic has been especially hard on Louise Lynch’s family.

Her daughter caught COVID-19 as the virus first took hold in Kansas City and nearly succumbed to it. Lynch lost one job at the start of the pandemic. She says she was fired from another because of health complications from getting the virus late last year. She’s been fighting to keep herself, her daughter and her disabled husband afloat with spotty unemployment payments, stimulus checks and community aid.

Now, she faces another hurdle: the electricity and water at her Kansas City, Kan., home could be cut off.

The Wyandotte County Board of Public Utilities and Evergy have resumed shutting off customers’ power — and in BPU’s case, water — if they don’t pay their bills. Both organizations had issued moratoria at various points during the pandemic and the cold weather months. As the COVID-19 vaccine becomes more readily available and life in the U.S. crawls back toward normalcy, the reprieve is ending.

And just because residents were under a moratorium doesn’t mean their bills are forgiven. The back balances some families incurred are now coming due.

Across Kansas and Missouri, federal rent and utility relief is available to help residents who may have fallen behind. But with the moratoria ending, they face a ticking clock and bureaucratic hoops to secure help or face having their utilities shut off.

Lynch has a balance of more than $500 with BPU. She said she’s behind on rent and her natural gas bill, too. She received help from Wyandotte County Mutual Aid only to get behind again when the next bill arrived.

“My full-time job is not just taking care of my family,” Lynch said. “I have to go out and beg.”

Lynch and her family have been waiting for assistance from the Kansas Emergency Rental Assistance program for nearly two months — even longer if you consider the weeks Lynch spent struggling with the application system. Though her family has received an initial letter indicating they are qualified, the state is still processing the application.

In the meantime, her BPU bill says she must pay her past due balance or face disconnection.

For their parts, Evergy and BPU both said they work with residents trapped in the KERA application process and can be flexible on shutoff dates.

“At that point, communication becomes the key on whether or not we would be able to modify that disconnection date,” said Gina Penzig, a spokeswoman for Evergy.

Missouri received more than $320 million from the same program, administered through the Missouri State Assistance for Housing Relief. The state also has a Low Income Home Energy Assistance Program.

In both states, a patchwork of local and nonprofit groups are also providing assistance.

Evergy and BPU customers can find more information about accessing those resources on the companies’ websites.

Since BPU ended its moratorium a few weeks ago, he said he has heard from dozens of residents at risk of getting their utilities shut off. Under the moratorium, some built up massive balances. The largest, he said, was $4,000.

And while relief programs are helpful, he thinks the relief money should have gone straight to BPU to forgive residents’ debts rather than through an application process that requires substantial paperwork from families in need.

In one week, the fund, which is completely funded by community donations, provided aid to three households who had already lost their power.

Lynch has also pressured BPU to leave power on for residents with certain medical devices. She said her husband uses a CPAP machine and can’t breathe at night without it. But she has had little luck.

She said the utility providers made “so much money” during the February cold snap that forced rolling blackouts across the midwest, “but they can’t help somebody who is trying to breathe.”

“People’s lives are at stake,” Lynch said. “That has to be worth more than a dollar.”

David Mehlhaff, BPU’s chief communications officer, said the utility was initially supposed to end its moratorium at the beginning of March but waited until the end of the month so the KERA program would be off the ground.

A couple weeks after that, disconnections began.

Since mid April, he said about 1,200 households have had their service disconnected.

There’s “no way of knowing,” he said, “but the lion’s share of them are probably back on.”

Evergy’s moratorium ended May 2. The investor-owned utility did not say how many households’ power it had disconnected in the last couple of weeks.

In a statement, Penzig said Evergy was the first utility in the area to halt disconnections and outlined incentives the company offered to help customers catch up on their bills when it resumed shut-offs from July to November.

“In February we announced that our disconnect moratorium would end on May 2, giving customers plenty of notice to contact us to learn about assistance options and payment plans,” Penzig said. “We have directly communicated with customers by phone, email and mail about payment options and available community assistance. In addition we have used media outreach and social media to raise awareness about available help in the community and encourage customers to find assistance.”

One of those customers is Brandy Granados, a Missouri resident who said she owes Evergy more than $600.

Granados said she has struggled to balance work and caring for her son with Autism, whose school has alternated between in-person and virtual learning over the course of the pandemic.

Now that her son is back in school, she can start working in-person, meaning she should be able to afford the necessities once her paychecks start rolling in.

But she exhausted her last stimulus check and her income tax refund. Without it, she said she likely would have been homeless by March. And though she’s nearly out of the woods, she doesn’t know how she’s going to make it.

“I don’t know what’s going to happen next month,” she said. “Hopefully I can find help one more time.”

If you have actually thought of coming to be a qualified nursing assistant, but do not know if it corrects for you, the following list of main reasons to get into nursing might aid you make a … END_OF_DOCUMENT_TOKEN_TO_BE_REPLACED

In a since-deleted tweet responding to a question about a potential contract extension for Kansas City Chiefs safety Tyrann Mathieu, Mathieu tweeted that he's "probably not" going to get a new deal in … END_OF_DOCUMENT_TOKEN_TO_BE_REPLACED

KANSAS CITY, Mo. — A manhole left uncovered is the source of concern after a woman damaged her car in Kansas City. The single-car crash happened at 11th Street and Tracy Avenue during the busy … END_OF_DOCUMENT_TOKEN_TO_BE_REPLACED

Kansas City, Missouri's COVID-19 emergency order was set to expire at the end of the month. But Mayor Quinton Lucas made it clear Friday that private businesses can still set their own rules.Any … END_OF_DOCUMENT_TOKEN_TO_BE_REPLACED