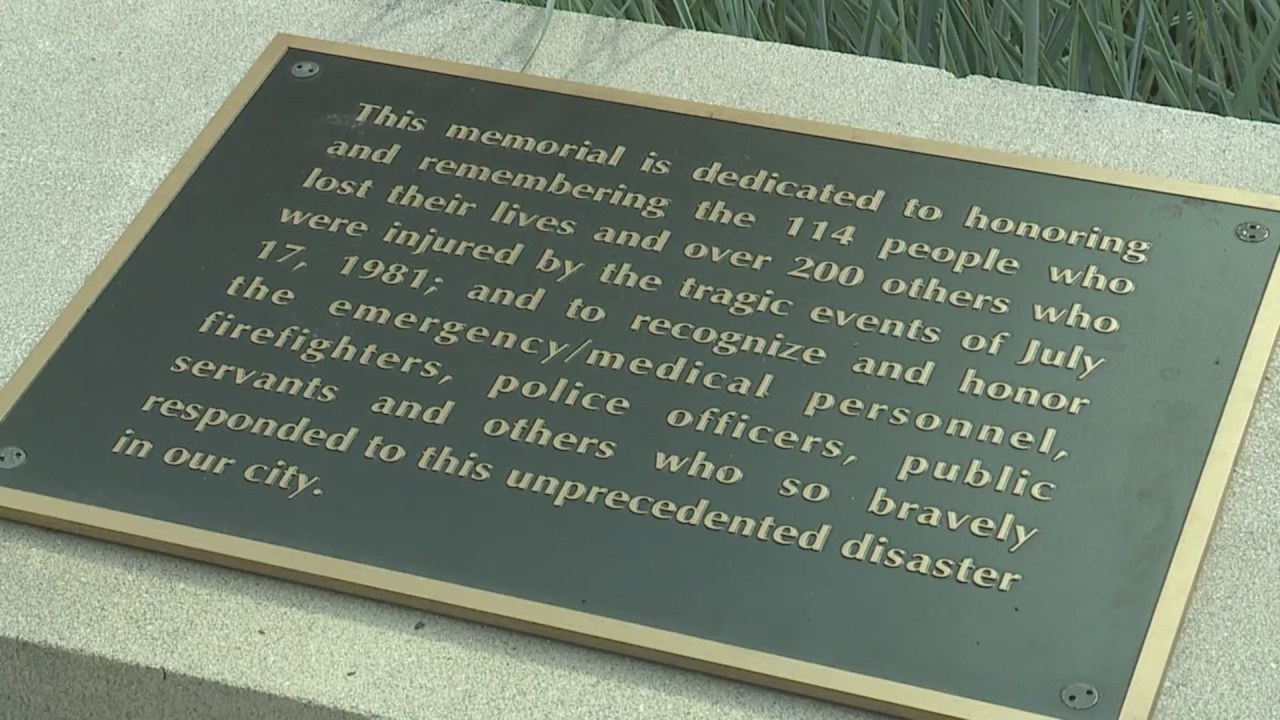 KANSAS CITY, Mo. — Forty years ago, crime scene tape and chaos were the scene at a Kansas City, Missouri hotel.

Two skywalks collapsed at the Hyatt Regency Hotel, killing 114 people and injuring 216 others.

“I’d give everything to have my dad back, even for five minutes,” Paul Botnem, who lost his father said.

Saturday was Paul’s first time seeing his dad’s name, Henry, on the Skywalk Memorial after he was killed.

“It’s overwhelming, but it’s nice to see that the people that were killed are being memorialized,” Botnem said.

A beautiful evening full of laughter and dancing turned into disaster and tragedy on July 1, 1981.

Forty years later dozens of people gathered at the Skywalk Memorial to reflect on the lives lost, injured and those that helped.

“When I arrived at the scene of the Hyatt there was nothing in my academy training that could have prepared me or other first responders for what we witnessed that night,” Vince Ortega Former Kansas City Police Officer.

Ortega said he was the first to respond that day.

He said as bad as the incident was good things came out of it.

“This event has been a case study,” Ortega said. “Not only regionally but nationally for disaster preparedness that crossed jurisdictional boundaries involving multiple emergencies and disciplines.”

With tears in his eyes, Botnem said there are conversations and memories he’ll never be able to share with his dad again.

“His wisdom, his knowledge and his laughter,” Botnem said. “You know, all of the things I did not have a chance to learn from him.”

In a since-deleted tweet responding to a question about a potential contract extension for Kansas City Chiefs safety Tyrann Mathieu, Mathieu tweeted that he's "probably not" going to get a new deal in … END_OF_DOCUMENT_TOKEN_TO_BE_REPLACED

KANSAS CITY, Mo. — A manhole left uncovered is the source of concern after a woman damaged her car in Kansas City. The single-car crash happened at 11th Street and Tracy Avenue during the busy … END_OF_DOCUMENT_TOKEN_TO_BE_REPLACED

Kansas City, Missouri's COVID-19 emergency order was set to expire at the end of the month. But Mayor Quinton Lucas made it clear Friday that private businesses can still set their own rules.Any … END_OF_DOCUMENT_TOKEN_TO_BE_REPLACED

KANSAS CITY, MO (KCTV/AP) — All restrictions meant to slow the spread of the coronavirus were being rescinded as of midday Friday in Kansas City, Missouri, following guidance from the U.S. Centers for … END_OF_DOCUMENT_TOKEN_TO_BE_REPLACED