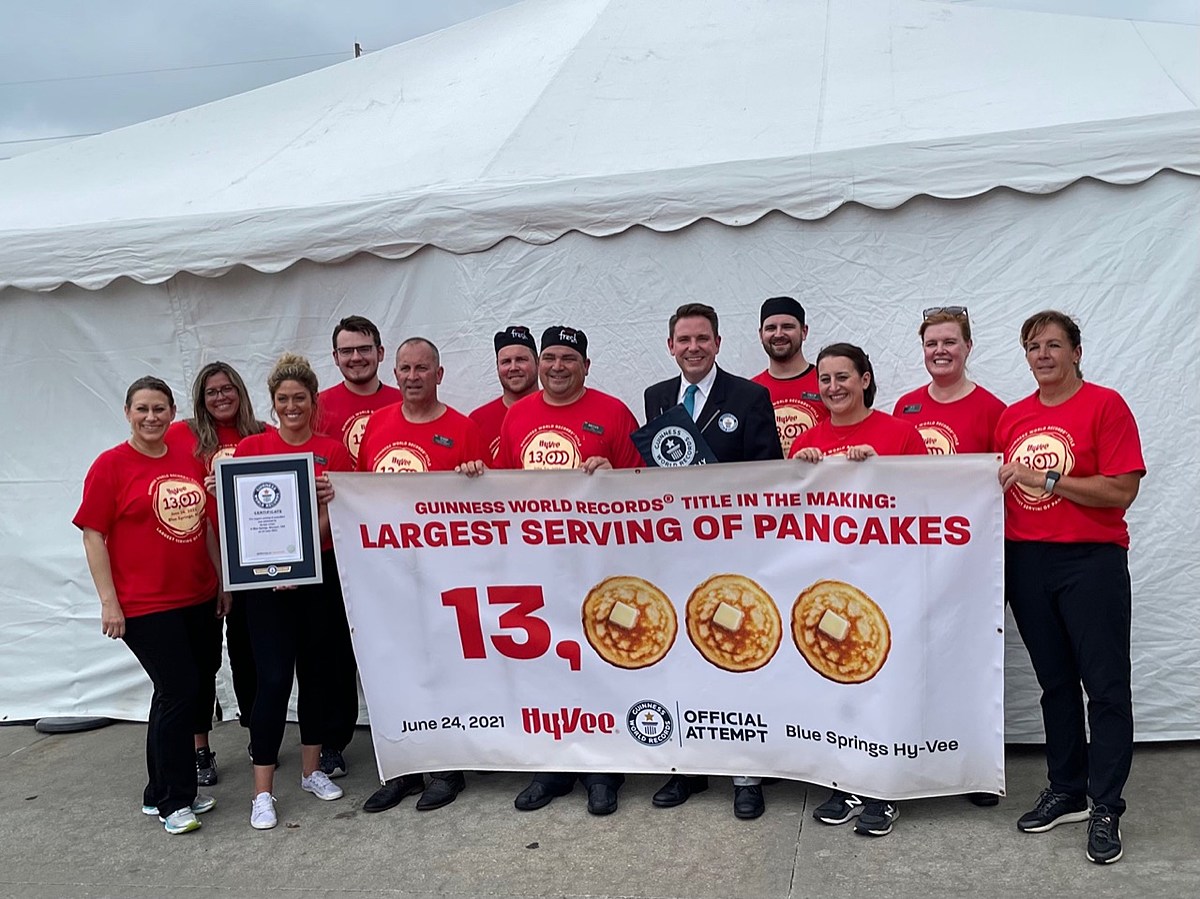 HyVee is now in the GUINNESS WORLD RECORDS book. Last week, a Hy-Vee in Missouri set the world record for the largest serving of pancakes. They broke the record by serving just under 300 more pancakes than the previous record holder. To make this even better, all of the pancakes went to feeding thousands of people via a food bank.

On Thursday, Hy-Vee announced that their store in Blue Springs, Missouri broke a GUINNESS WORLD RECORDS title for the largest serving of pancakes. Officials say the event marks the launch of the company’s new “Best Breakfast in America” menu.

How many pancakes were served? 13,000 pancakes were prepared and made by 18 Hy-Vee chefs in just over 7 hours. To confirm that the world record was broken, officials say that an adjudicator from Guinness World Records was present during the event. The individual declared Hy-Vee as the new record title holder for the largest serving of pancakes.

Here is something that will make you smile even more. All 13,000 pancakes were donated to Harvesters – The Community Food Network, a regional food bank in the greater Kansas City area. All of those pancakes were expected to feed 6,500 individuals or more than 1,600 families in need across Missouri and Kansas.

According to the press release, the record was officially broken when Hy-Vee employees flipped the 12,717th pancake. Even though the record was broken, the team continued to cook and ended the event with 13,000 pancakes at 12:16 p.m.

“What better way to celebrate the launch of our new breakfast menu than with a GUINNESS WORLD RECORDS™ title. We are extremely appreciative of our amazing employees who helped make this event a success, and we are grateful for the partnership with Harvesters, which allows us to help feed those who are food insecure.”

For more information about Hy-Vee’s “Best Breakfast in America, visit their website here.

Congrats to Hy-Vee on their new world record!

In a since-deleted tweet responding to a question about a potential contract extension for Kansas City Chiefs safety Tyrann Mathieu, Mathieu tweeted that he's "probably not" going to get a new deal in … END_OF_DOCUMENT_TOKEN_TO_BE_REPLACED

KANSAS CITY, Mo. — A manhole left uncovered is the source of concern after a woman damaged her car in Kansas City. The single-car crash happened at 11th Street and Tracy Avenue during the busy … END_OF_DOCUMENT_TOKEN_TO_BE_REPLACED

Kansas City, Missouri's COVID-19 emergency order was set to expire at the end of the month. But Mayor Quinton Lucas made it clear Friday that private businesses can still set their own rules.Any … END_OF_DOCUMENT_TOKEN_TO_BE_REPLACED

KANSAS CITY, MO (KCTV/AP) — All restrictions meant to slow the spread of the coronavirus were being rescinded as of midday Friday in Kansas City, Missouri, following guidance from the U.S. Centers for … END_OF_DOCUMENT_TOKEN_TO_BE_REPLACED