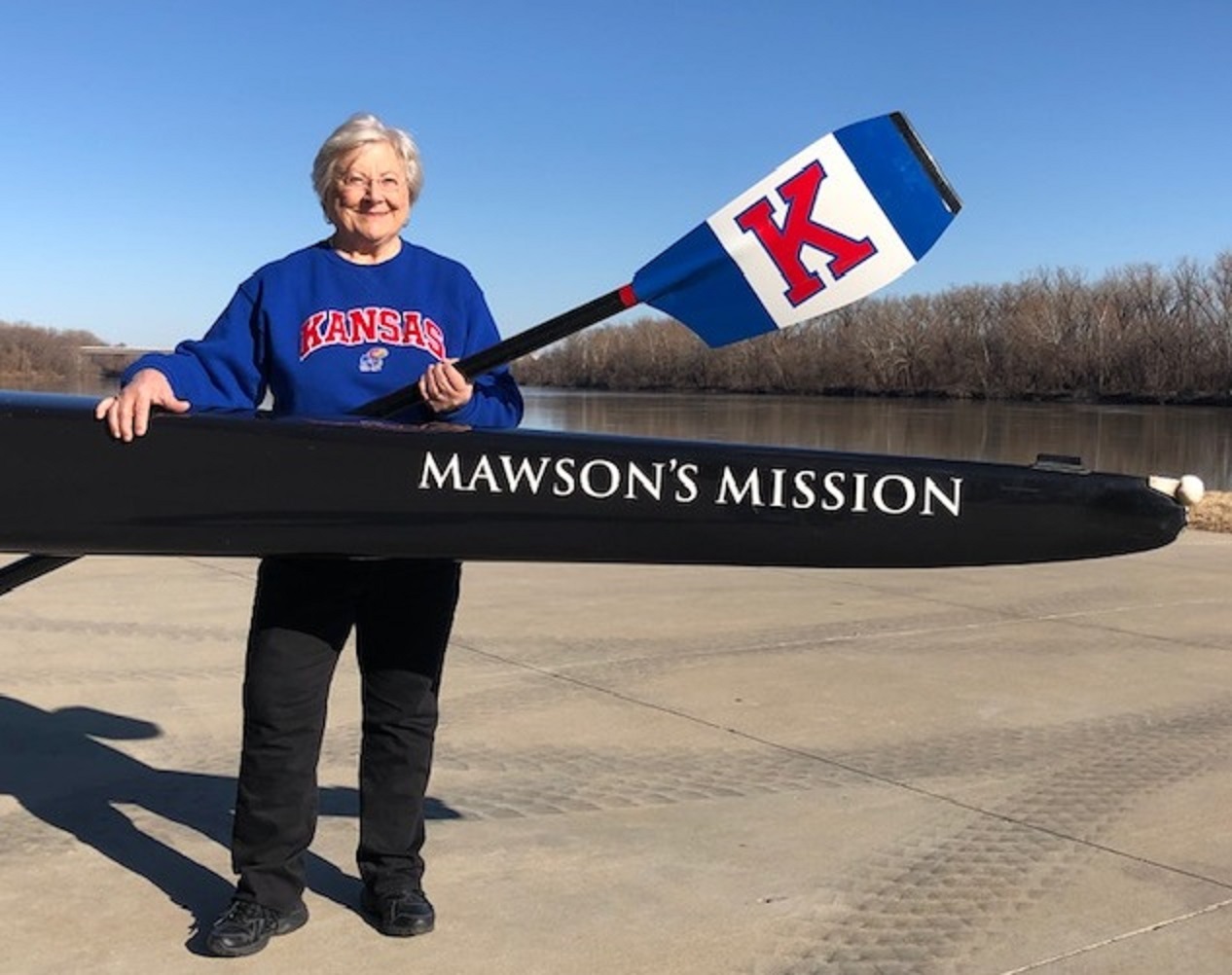 Marlene Mawson poses with the boat used by the KU crew for the cover of “Mawson’s Mission: Launching Women’s Intercollegiate Athletics at the University of Kansas,” a 2020 Kansas Notable Book. (Submitted)

The Kansas Reflector welcomes opinion pieces from writers who share our goal of widening the conversation about how public policies affect the day-to-day lives of people throughout our state. Marlene Mawson is an emerita professor of physical education at the University of Kansas. Her 2020 memoir, Mawson’s Mission: Launching Women’s Intercollegiate Athletics at the University of Kansas, has been selected as a Kansas Notable Book for 2021.

Imagine what women’s sport competition was like when your grandmother was in college more than 60 years ago. Young women, then, could not know what women’s intercollegiate athletics would become for their daughters and granddaughters.

Colleges did not offer women’s athletics prior to 1968, and most people are unaware of how many obstacles needed to be overcome before women’s collegiate athletics could begin all across the country that year.

Sixty years ago, sports were played by college women only in intramurals or once a season at a sports-day invitational. In rural areas of the country, some high schools offered girls the chance to compete against other girls’ sports teams in the same conference alignment as the boys’ teams. My high school sponsored girls’ basketball and softball in Archie, Missouri, and I played on both teams. But when I entered college in 1958, I was disappointed to learn that there were no intercollegiate athletics teams for women at the University of Central Missouri, or anywhere.

In 1962, the U.S. Olympic Development Committee, in coordination with the National Association of Girls and Women in Sport (NAGWS), inaugurated a series of five National Olympic Institutes for Women’s Sports held within one decade, to enhance prospects for the U.S. women’s teams to succeed in Olympic competition.

These Institutes were for the purpose of teaching 100 selected women, two per state, how to coach a specific sport — because women had no experience in either playing or coaching competitively in schools. These women were challenged to return to their respective states and conduct workshops to teach other women in high schools and colleges how to coach that sport.

The Sport Institute for 1963 was in track and field and gymnastics; for 1965 it was aquatic sports; winter sports was in January 1966, basketball and power volleyball in December 1966; and in 1969 it was advanced basketball and officiating sports. I was privileged to be selected by Missouri in 1966 and by Kansas in 1969 as a participant in each of the basketball Institutes.

The NAGWS announced in spring 1968 that National Intercollegiate Sport Championships for Women would begin in 1969. In fall 1968, colleges across the country appointed women’s intercollegiate athletics directors who began organizing women’s teams for their institutions.

Basketball, field hockey, volleyball, softball, gymnastics and swimming were the first sports teams organized, and I coached four of them. Universities and colleges across Kansas participated in season competition within the state, governed by the newly formed Association for Kansas Women’s Intercollegiate Sports.

With a total budget of only $2,000 for all six women’s athletics teams, KU players in the early years shared uniforms with other team sports, borrowed sports equipment from the instructional program, took their own sack lunches on trips, and carpooled in our own cars to away games. Our practices and home games were scheduled on Robinson courts and fields, because Allen Fieldhouse was reserved for men only.

In November 1972, the Association for Athletics for Women (AIAW) was formed at a national conference held in Overland Park. Earlier in June, the Education Amendments Act of 1972 had been passed by Congress, requiring that any educational institution receiving federal funding must demonstrate adherence to this law. The most consequential stipulation in the law was Title IX, requiring educational institutions to provide equal opportunity in school activities for all students regardless of sex, including athletics.

The following summer, Title IX compliance regulations were published, providing women’s athletics the legal basis for equality in sports between men and women — but allowing five years before compliance was required. Throughout the 1970s, the NCAA and the AIAW fought over efforts to offer women’s national sports championships. In 1978, Title IX required all universities receiving federal funds to comply with Title IX.

Women athletes at KU persevered and competed successfully prior to the legal threat of Title IX and the takeover of the NCAA, building the legacy that serves as the foundation for the opportunities enjoyed by women athletes in the 21st century. From this history, it is evident that contemporary athletes have sport competition advantages unforeseen by their grandmothers.

In a since-deleted tweet responding to a question about a potential contract extension for Kansas City Chiefs safety Tyrann Mathieu, Mathieu tweeted that he's "probably not" going to get a new deal in … END_OF_DOCUMENT_TOKEN_TO_BE_REPLACED

KANSAS CITY, Mo. — A manhole left uncovered is the source of concern after a woman damaged her car in Kansas City. The single-car crash happened at 11th Street and Tracy Avenue during the busy … END_OF_DOCUMENT_TOKEN_TO_BE_REPLACED

Kansas City, Missouri's COVID-19 emergency order was set to expire at the end of the month. But Mayor Quinton Lucas made it clear Friday that private businesses can still set their own rules.Any … END_OF_DOCUMENT_TOKEN_TO_BE_REPLACED

KANSAS CITY, MO (KCTV/AP) — All restrictions meant to slow the spread of the coronavirus were being rescinded as of midday Friday in Kansas City, Missouri, following guidance from the U.S. Centers for … END_OF_DOCUMENT_TOKEN_TO_BE_REPLACED