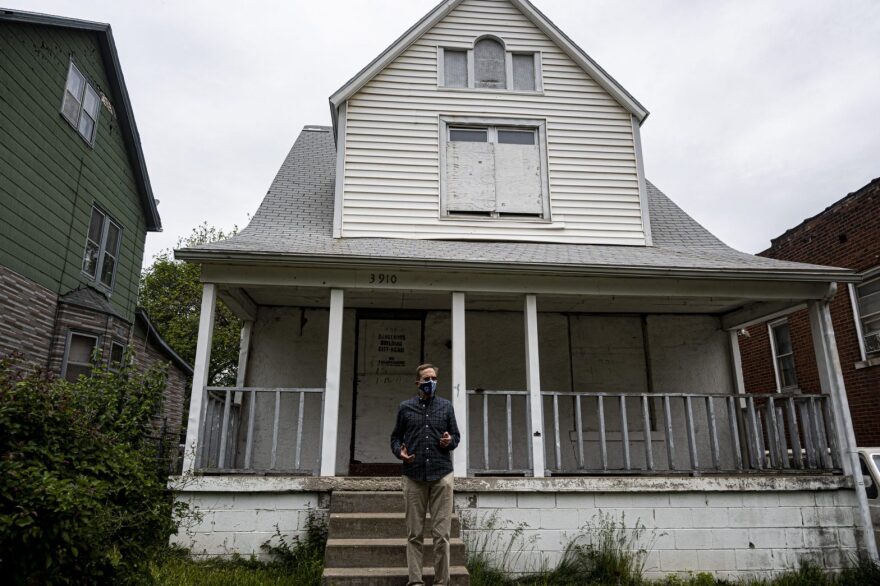 On a corner in Kansas City, Missouri’s historic northeast neighborhood stands a two-story home painted a hue of brick red and dark beige. Crisp, white paint outlines every darkened window. The back porch is painted white, the fencing accented in gold.

Months ago, this home at 4401 E. Ninth St. was condemned — slated for demolition as part of Kansas City’s dangerous buildings list. It would’ve been torn down if the Lykins Neighborhood Association hadn’t stepped in to save it.

By using Missouri’s Abandoned Housing Act, the Lykins Neighborhood Association assumed ownership of the dilapidated home from its absentee owner — preventing it from being turned into yet another vacant lot.

The result: A neglected house becomes a livable home.

Gregg Lombardi, president of the Lykins Neighborhood Association and former executive director of Legal Aid of Western Missouri, said using this legal mechanism in state law has been effective.

“It’s a wonderful resource,” he said. “I’ve seen it work all over Kansas City.”

A recent Kansas City Beacon investigation found there are more than 360 properties on the city’s dangerous buildings list, meaning they had codes violations that make them structurally unsound for anyone to live or work in. Sometimes, these properties are demolished. But other times, as The Beacon found, they’re left standing for years as evidence of blight and disinvestment. These properties often become magnets for illicit activity like illegal dumping.

The Lykins neighborhood stretches north to south from Independence Avenue to the railroad tracks that run diagonally from Truman Road to Ninth Street and is bordered to the west by Benton Boulevard.

It’s home to many families of color, immigrants and refugees. Census data shows Lykins is 77% non-white, and Hispanic people make up 34% of the neighborhood. The median household income in Lykins is nearly $24,000.

The Beacon also found that these dangerous buildings tend to be concentrated in neighborhoods similar to Lykins, where more people of color live and household incomes are lower — including east of Troost Avenue, an economic and racial dividing line in Kansas City caused by historically racist housing policies.

Assuming ownership of these blighted properties is one way a neighborhood like Lykins can take charge of making improvements. Legal Aid of Western Missouri, which provides civil legal help on issues like housing, has also set up a Home Rehabber Loan Fund to financially support the renovations.

This project to obtain ownership of vacant homes — like the one on 4401 E. Ninth Street — began in mid- to late 2018 when Lombardi, who also runs the local nonprofit Neighborhood Legal Support of Kansas City, used the organization’s legal resources to partner with the Lykins Neighborhood Association and put the Abandoned Housing Act to use.

It’s one of about 30 cases the Lykins association is litigating, and so far, the group has gotten ownership of about a dozen homes.

Once fully renovated, the house at Kensington Avenue and E. Ninth Street will become an owner-occupied home, Lombardi said.

“A house like this is, I mean, it’s a wonderful thing for the neighborhood because it looks so great on a major street,” he said. “Having housing just to attract housing is a fantastic thing.”

When an Abandoned Housing Act lawsuit is filed in civil court, Lombardi said the property has to fulfill three requirements: It’s delinquent with code violations, it’s been empty for six months and it’s not legally occupied.

The plaintiff must be a not-for-profit organization — like many neighborhood associations.

“If you establish those three elements of the case, you win,” Lombardi said. “And if you win, that gives you the right to take over the property and bring it up to code.”

Before filing a case in court, the neighborhood association first gives the property owner the chance to rehab the home.

Lombardi said if the owner is going to make a good-faith effort, the neighborhood association will work with them to make sure there’s a clear timetable to finish the renovations. This happens in about a quarter of cases, he said.

It’s when the owner is unresponsive that the neighborhood association uses the Abandoned Housing Act.

Lombardi said the neighborhood association aims to identify a rehabber and renovation process for the property before filing a case. The group presents a list of blighted properties to over 20 local rehabbers who can apply to renovate a house.

Gregg Lombardi stands in front of a home classified as a dangerous building in the Lykins Neighborhood of Kansas City, Missouri. The house is abandoned and situated in between two occupied homes.

The rehabber chosen will enter into a contract with the neighborhood association outlining their plans for the renovation. The rehabber pays for the renovations and will own the home when it’s finished. They agree to comply with building standards the neighborhood association has developed, even down to the color palette of the building, Lombardi said.

Pinpointing a rehabber before taking the case to court does not necessarily give the neighborhood association a better chance of winning, Lombardi said. But it ensures there’s a clear plan of what will happen with the property.

The court also has to approve of the rehab plan.

Once the rehab process is finished, Lombardi said the former property owner has to be given the opportunity to pay for the renovation as a statutory requirement, though he said he’s not aware of this being exercised since Lykins started its project. The property owner does not officially lose ownership of the property until the rehab is completed.

Lombardi said the entire process — from taking it to court to completing the renovation — can take about 15 to 18 months.

For local renovators, it’s an inexpensive way to acquire and renovate properties, he said.

It’s then up to the rehabber to decide if they want to sell the home, rent it out or live in it themselves.

What rehabbers in Kansas City should know

Miguel Terreros is a Kansas City rehabber who’s renovated vacant homes through Missouri’s Abandoned Housing Act. As a rehabber in these cases, Terreros is responsible for financing the renovation and fixing the code violations.

Terreros has renovated vacant homes from Lykins in the northeast to the Washington Wheatley neighborhood located just south of 18th and Vine. He’s taken properties that were abandoned for years and turned them into livable homes.

He’s currently working on three renovations in neighborhoods located east of Troost Avenue. As a rehabber, he’s seen the impacts of his work firsthand.

“The problem we were having with these houses, they’re a haven for crimes,” Terreros said. “No one wanted to live in these houses three years ago, four years ago, five years ago… (We’ve) turned it from a pain to an asset.”

A property does not have to be on the city’s dangerous buildings list to be an Abandoned Housing Act case. Lombardi said that is not relevant to the litigation itself.

But it can help when it comes to funding, particularly if the dangerous building was slated for demolition, like the house at 4401 E. Ninth St.

“If the city is willing to provide some sort of a subsidy for somebody who will rehab a property that is about to be demolished, that becomes a win-win for everybody,” Lombardi said.

That formerly abandoned home in Lykins received a subsidy of $8,500 from the city to fund its renovation. Lombardi said it would have cost between $10,000 and $12,000 to demolish the home.

Doing this is better than having a vacant lot in its place, Lombardi said.

“The vacant lot is going to cost the city — they’ll probably have to pay to maintain that loss,” he said. “There’ll be crime in the lot. There’ll be dumping in the lot. It’s just a lose-lose… The city and county are not getting tax revenues.”

Lombardi adds that he also hears about properties by word of mouth.

“Some of it is just inspection,” Lombardi said. “Walking the streets and seeing what houses are in really bad shape.” 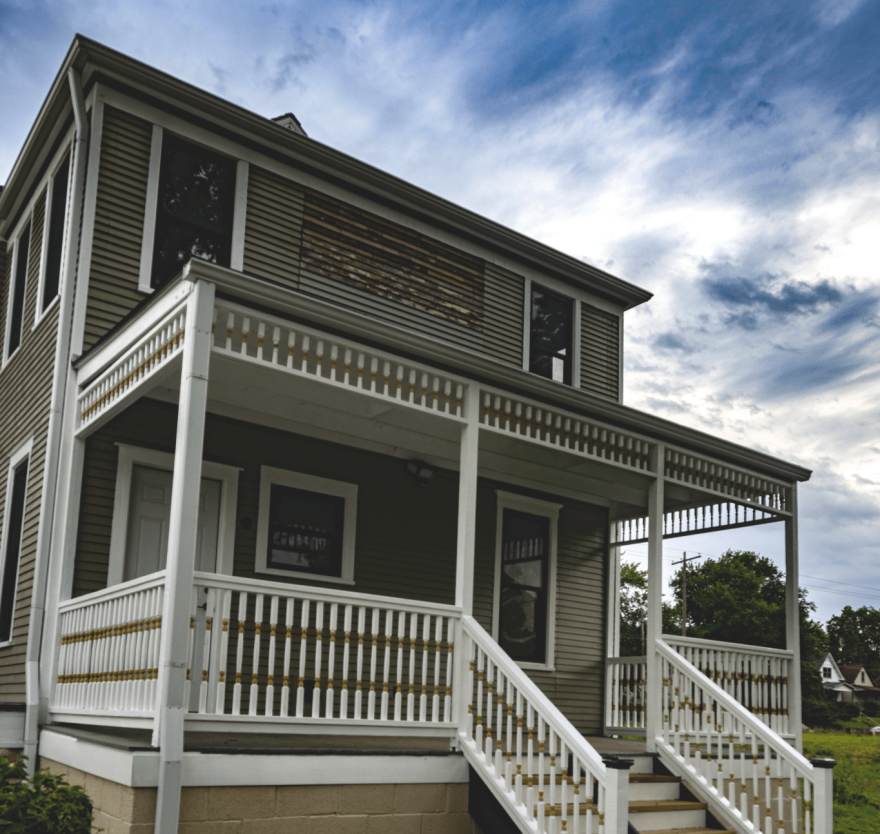 The home at 4401 E. Ninth Street is currently under renovation. It was acquired by the Lykins Neighborhood Association through the Missouri Abandoned Housing Act and was saved from demolition.

Model for other neighborhoods to rehab

Before the home on the corner of E. Ninth Street and Kensington Avenue was renovated, it was falling to pieces. The vacant lot behind it often attracted trash and illegal dumping, Lombardi said.

All of that is changing as more houses are being renovated throughout the neighborhood.

Kansas City Council Member Melissa Robinson represents the 3rd District, which encompasses neighborhoods east of Troost Avenue, including Lykins. She said the model of assuming ownership of vacant properties is a promising solution.

“The city manager is very much in favor of providing financial support to the licensed neighborhood association, so that they can train other attorneys that live in nice neighborhoods so that they can expedite getting these properties back online,” she said. “Their model’s beautiful.”

The challenge, Robinson said, is the city not having enough legal support to make a significant impact. She said her goal is for the 3rd District to acquire five to seven properties a year through the receivership process.

According to Kansas City, Missouri’s municipal code of ordinances, this would allow the city to petition a court to appoint a “receiver” to rehabilitate a vacant nuisance property, demolish it or sell it to a buyer.

David Kemper is the director at the nonprofit Trust Neighborhoods, which has been working with the Lykins Neighborhood Association to support renovations of blighted buildings and prevent the displacement of residents. He said it’s better to prioritize renovations of dangerous, vacant buildings than to demolish them.

Lombardi agrees it’s in the city’s best interest to support efforts like this.

This is something more neighborhoods can do, too. But the main challenge is resources.

“Having someone to bring all the rehabbers together, and to check on their work and see if they do really good work, and then to administer the process of applications and then draft the contracts, bring the litigation,” Lombardi said. “There are a lot of moving parts.”

Lombardi hopes the successes in Lykins will make it easier for the city to fund similar solutions.

This story was originally published on The Beacon.

In a since-deleted tweet responding to a question about a potential contract extension for Kansas City Chiefs safety Tyrann Mathieu, Mathieu tweeted that he's "probably not" going to get a new deal in … END_OF_DOCUMENT_TOKEN_TO_BE_REPLACED

KANSAS CITY, Mo. — A manhole left uncovered is the source of concern after a woman damaged her car in Kansas City. The single-car crash happened at 11th Street and Tracy Avenue during the busy … END_OF_DOCUMENT_TOKEN_TO_BE_REPLACED

Kansas City, Missouri's COVID-19 emergency order was set to expire at the end of the month. But Mayor Quinton Lucas made it clear Friday that private businesses can still set their own rules.Any … END_OF_DOCUMENT_TOKEN_TO_BE_REPLACED

KANSAS CITY, MO (KCTV/AP) — All restrictions meant to slow the spread of the coronavirus were being rescinded as of midday Friday in Kansas City, Missouri, following guidance from the U.S. Centers for … END_OF_DOCUMENT_TOKEN_TO_BE_REPLACED