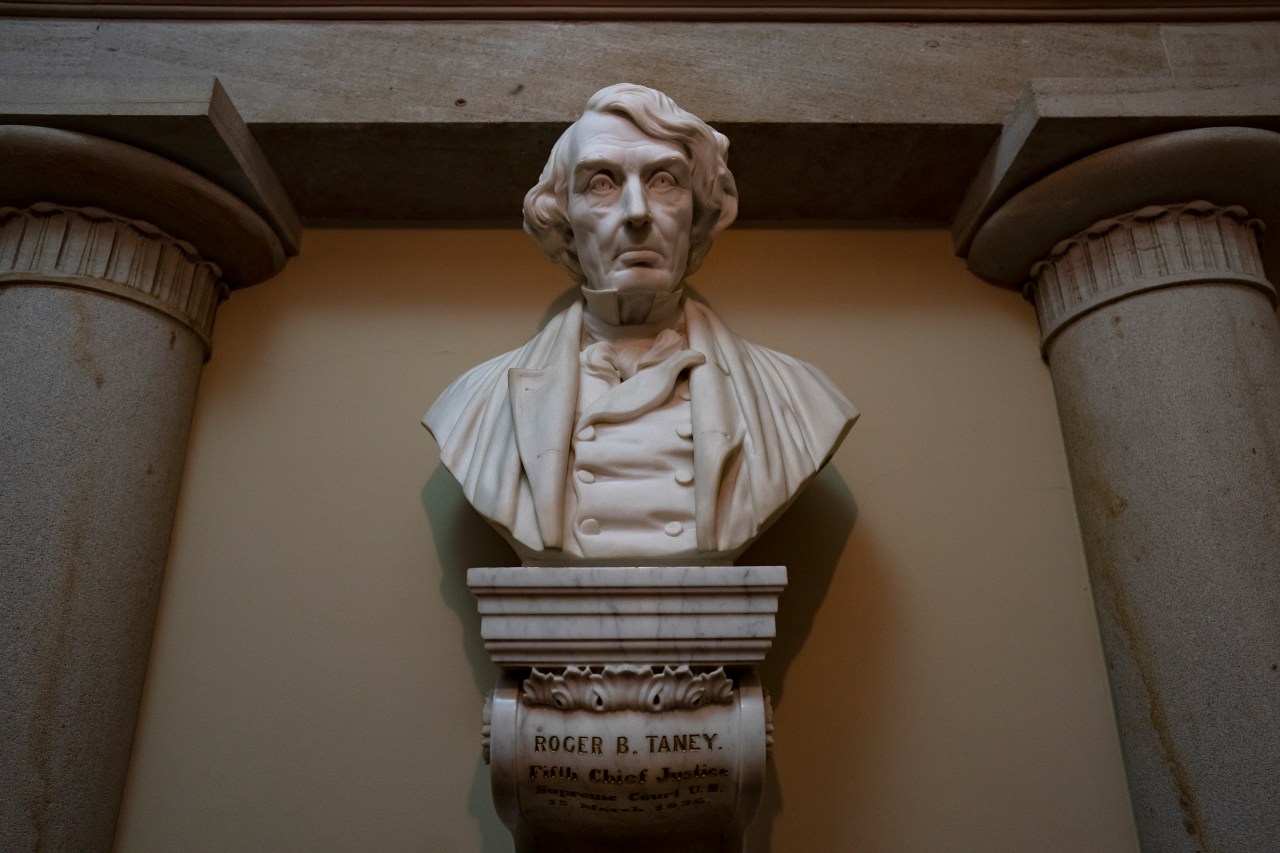 WASHINGTON (AP) — The House voted Tuesday to approve a bill that would remove from the Capitol a bust of Roger Taney, the U.S. chief justice best known for an infamous pro-slavery decision, as well as statues of Jefferson Davis and others who served in the Confederacy.

The bill passed by a vote of 285-120. Democrats were unanimous in their support for the bill and were joined by 67 Republicans. A similar bill last year passed the House but failed to gain traction in the Senate. Backers are hoping for a different outcome now that President Joe Biden is in the White House and Democrats control the Senate.

The vote comes against the backdrop of larger reckoning in the U.S. with racism, one that’s prompted a reassessment of statues and other symbols that valorize those who upheld white supremacy. Protesters decrying racism last year targeted Confederate monuments in multiple cities, leading to many being taken down. But many others remain in places of honor, including at the U.S. Capitol.

Rep. Hank Johnson, D-Ga., said the Confederate statues send a message to Black people that their lives are not valued because those being honored “stood for the proposition that you were less than human.”

The Taney bust would be replaced with one of Thurgood Marshall, the first Black justice to serve on the nation’s highest court. The 2-foot-high marble bust of Taney is outside a room in the Capitol where the Supreme Court met from 1810 to 1860. It was in that room that Taney, the nation’s fifth chief justice, announced the Dred Scott decision, sometimes called the worst decision in the court’s history.

The Supreme Court held that Scott, as a Black man, was not a citizen and therefore had no right to sue, and found that legislation restricting slavery in certain territories was unconstitutional.

Three other statues honoring white supremacists — including former U.S. Vice President John C. Calhoun of South Carolina — would also be immediately removed under the legislation. Longer-term, the architect of the Capitol would be instructed to identify any other statues depicting those who served in the Confederate States of America for removal from public display.

Each state gets to submit two statues for display in the Capitol. When the donated statue arrives, it is placed in a location selected by the Joint Committee on the Library, a group of 10 lawmakers from both chambers that oversees works of fine art in the building.

Republicans note that some states are already working to replace some of about a dozen statues that would be potentially removed under the bill. North Carolina, for example, is replacing a statue of Charles Aycock, a former governor and white supremacist, with one of the Rev. Billy Graham. But the process is painfully slow.

Republican Leader Kevin McCarthy, R-Calif., said he would vote for the bill, but made it a point to emphasize that “all the statues being removed by this bill are statues of Democrats.”

That prompted Rep. Karen Bass, D-Calif., to question whether Republicans were aware of the “whole history of the civil rights movement.” She said that when Black people fought to enter the Democratic Party, many Americans left to join the Republican Party.

Some Democratic lawmakers offered to work with Republicans on speeding up the approval process, but they want to forge ahead in the meantime. Rep. Zoe Lofgren, the Democratic chair of the House Administration Committee, said the Confederate statues honor “traitors to their country.” She denied that removing them would be erasing the nation’s history.

“On the contrary, we must never forget our nation’s shameful periods of slavery, segregation and racism,” Lofgren said.

“Now, that history belongs in a museum. You know, we need to remember our history,” she said. “It doesn’t belong on a pedestal.”

One statue already gone from the Capitol is that of Confederate Gen. Robert E. Lee, which was removed from the National Statuary Hall Collection last year at the request of Virginia Gov. Ralph Northam. A state commission decided that Lee was not a fitting symbol for the state.

Just two weeks ago Congress approved a bill establishing Juneteenth as a new federal holiday commemorating the end of slavery in the United States, an unexpected breakthrough for supporters of the legislation. Democrats see a similar chance to address longstanding frustrations about the statues in the Capitol and are putting Republican lawmakers on the spot by calling a vote.

Last year, Sen. Mitch McConnell, R-Ky., said he supported continuing the practice of states replacing the statues on their own.

“They can trade them out at any time … a number of states are trading them out now,“ McConnell told reporters.

He also referred to the House legislation as “nonsense” that would “airbrush the Capitol.”

However, Republicans joined Democrats in the final weeks of Donald Trump’s presidency to override his veto of a defense policy bill that allows for the renaming of military bases that honor Confederate leaders. Trump repeatedly emphasized his opposition to changing the names of the military bases.

In a since-deleted tweet responding to a question about a potential contract extension for Kansas City Chiefs safety Tyrann Mathieu, Mathieu tweeted that he's "probably not" going to get a new deal in … END_OF_DOCUMENT_TOKEN_TO_BE_REPLACED

KANSAS CITY, Mo. — A manhole left uncovered is the source of concern after a woman damaged her car in Kansas City. The single-car crash happened at 11th Street and Tracy Avenue during the busy … END_OF_DOCUMENT_TOKEN_TO_BE_REPLACED

Kansas City, Missouri's COVID-19 emergency order was set to expire at the end of the month. But Mayor Quinton Lucas made it clear Friday that private businesses can still set their own rules.Any … END_OF_DOCUMENT_TOKEN_TO_BE_REPLACED

KANSAS CITY, MO (KCTV/AP) — All restrictions meant to slow the spread of the coronavirus were being rescinded as of midday Friday in Kansas City, Missouri, following guidance from the U.S. Centers for … END_OF_DOCUMENT_TOKEN_TO_BE_REPLACED