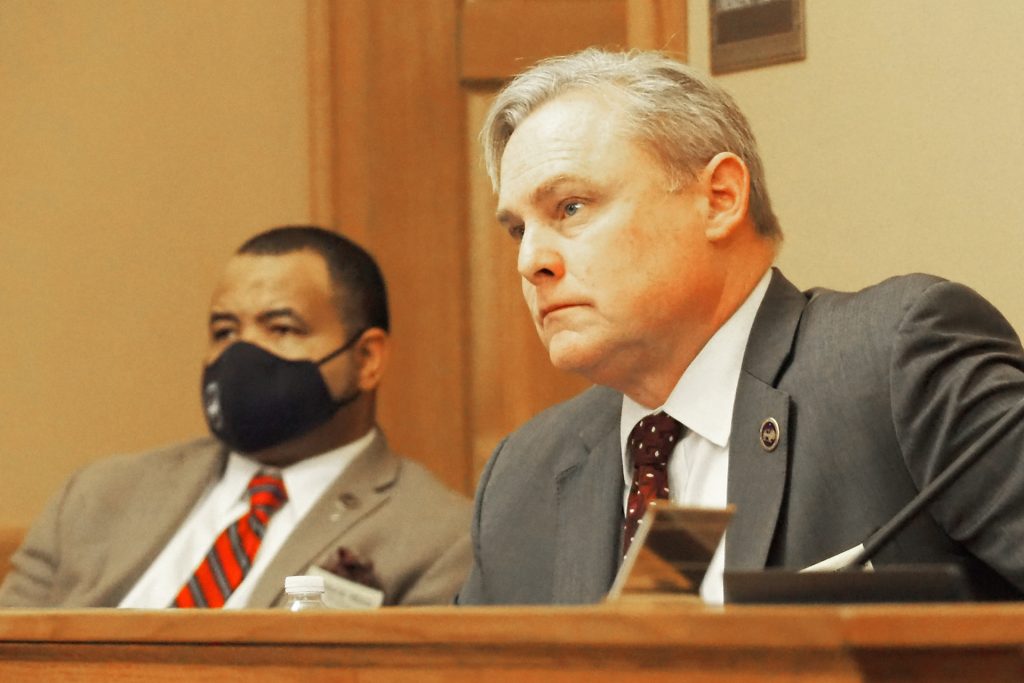 TOPEKA — In a one-sided, two-and-a-half-hour “informational hearing” Wednesday, a parade of upset parents, children, outspoken doctors and lobbyists vented to Kansas legislators in the House K-12 Budget Committee their frustrations with the shortcomings of remote and hybrid learning.

Republican legislators praised the speakers for their bravery in calling out school boards and exemplary efforts in pushing for children to return to in-person class. Education and school board associations, who were told to submit written testimony only, said frustration from parents is justified but rebuked GOP legislators for capitalizing on the pandemic to further their political goals.

One after the next, parents spoke of struggles with rapidly declining grades, children recounted struggles with motivation, and doctors warned of rising mental health issues associated with remote learning. More than a dozen testified against remote and hybrid learning, but school boards, and others who are making these decisions were not there to rebuff jabs thrown at them.

“Go knock on every door and blow these people out,” said Rep. Sean Tarwater, R-Stilwell, encouraging testifiers to campaign and run for school board positions. “That’s how you change this. Get rallied to pick good candidates — not a lot of them, just a few — and go blow them out.”

In March, amid rising COVID-19 cases, Gov. Laura Kelly closed Kansas public and private K-12 schools for the rest of the spring semester, moving education online. Kelly’s July effort to postpone school and extracurricular activities until Sept. 9 was rejected by the State Board of Education.

School boards across Kansas were tasked then with establishing their own reopening plan. Some abided by the governor’s recommendations or pushed the first day of school back. Others did not. Almost all established some sort of remote or hybrid learning program.

But as the pandemic dragged on, some school boards have been forced to shut down any hope of in-person classes for the foreseeable future, inviting discontent from parents and teachers who say it is safe and necessary to be in the classroom.

Christine White, a Johnson County pediatrician and mother of two daughters in the Blue Valley School District, voiced her frustrations and concerns from parents and children she provides care for. In remote testimony, she said grades are rapidly dropping and the number of children struggling with depression or anxiety is rising.

White argued it was safe to be in the classroom. She said school boards were under pressure from educators to keep class remote.

“Another big fear that we’re working against is, is the fear of teachers unions and the (Kansas National Education Association),” White said. “I think that they have a lot of control over school boards and superintendents, and then by extension over our children’s right to an education.”

Marcus Baltzell, a spokesman for the Kansas National Education Association, said the organization has never pressured anyone for remote learning. KNEA and its members have gone on record in support of in-person learning as the best model, but only when health officials and gating criteria indicate it is safe to return.

He said parents are justifiably frustrated with the educational struggles their children have endured during the pandemic. He also blasted committee members for taking advantage of a health crisis and these difficulties to attack public schools and educators.

“Public schools are certainly bending over backward to do everything they can, everything we can, as educators, to try and make the best of a global crisis,” Baltzell said. “Yet, somehow, they’re going to use this opportunity to leverage this crisis, to try and push through what has been a longstanding effort to further erode public schools by siphoning their money off to unaccountable private and for-profit schools.”

Dave Trabert, of the Kansas Policy Institute, pointed to decreasing grades across the state, although he noted Kansas was not a high-performing state before the pandemic.

“Based on these state assessment results, we know that all across Kansas and right here in Johnson County that we’re giving kids diplomas knowing some of them are below grade level,” Trabert said.

Rep. Valdenia Winn, D-Kansas City, Kansas, and member of the House K-12 Budget Committee, said she never sees eye to eye with Trabert but agreed with his acknowledgment that these issues existed long before COVID-19. The pandemic has only removed the “scab off a systemic problem,” she said.

Rep. Kristey Williams, R-Augusta, chairwoman of the House K-12 Budget Committee, told Winn they would be happy to have those conversations. However, the individuals Williams invited to testify were only asked to share personal experience, not “all the points,” she said.

School boards and administrators were told testimony would be in writing for the so-called informational hearing, said Mark Tallman, associate executive director for advocacy and communications for the Kansas Association of School Boards. He said all sides should be represented in the discussion.

“I don’t know why a decision was made to have some people allowed to testify (in-person) and not others,” Tallman said. “We want to make sure that the committee and all legislators hear all the information. We’re certainly encouraging our members to share their concerns.”

Rep. Jarrod Ousley, D-Merriam, said he did not know the intent of the hearing or if there would be an opportunity for those making the difficult decisions working to adapt to the pandemic to provide oral testimony to the committee.

“If it was in the interest of time, that’d be interesting since we went two and a half hours. It just seemed to be extremely lopsided,” Ousley said. “I’m not sure you can call it an informational hearing if you didn’t get all the information.”

In a since-deleted tweet responding to a question about a potential contract extension for Kansas City Chiefs safety Tyrann Mathieu, Mathieu tweeted that he's "probably not" going to get a new deal in … END_OF_DOCUMENT_TOKEN_TO_BE_REPLACED

KANSAS CITY, Mo. — A manhole left uncovered is the source of concern after a woman damaged her car in Kansas City. The single-car crash happened at 11th Street and Tracy Avenue during the busy … END_OF_DOCUMENT_TOKEN_TO_BE_REPLACED

Kansas City, Missouri's COVID-19 emergency order was set to expire at the end of the month. But Mayor Quinton Lucas made it clear Friday that private businesses can still set their own rules.Any … END_OF_DOCUMENT_TOKEN_TO_BE_REPLACED

KANSAS CITY, MO (KCTV/AP) — All restrictions meant to slow the spread of the coronavirus were being rescinded as of midday Friday in Kansas City, Missouri, following guidance from the U.S. Centers for … END_OF_DOCUMENT_TOKEN_TO_BE_REPLACED