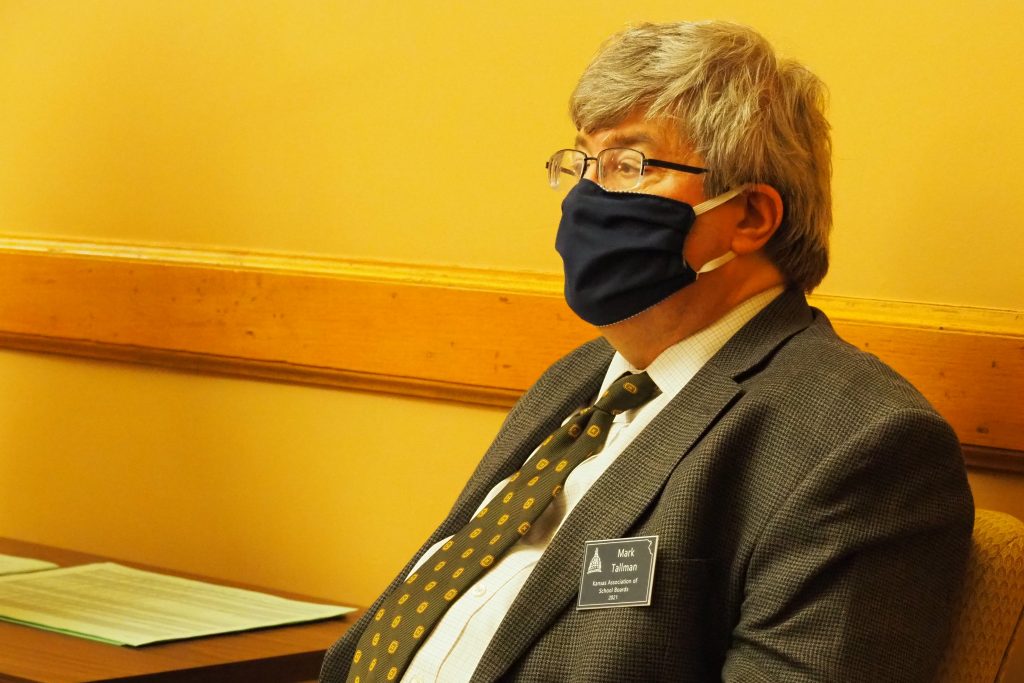 One of multiple so-called “voucher” bills on the legislative docket this session, the measure proposed Monday would allow “at-risk” students to have the base state aid normally given to a public school district instead put in a savings account to pay for private school tuition or other approved school costs. “At-risk” would include not just students in poverty but those who have spent a certain number of term hours in remote or hybrid learning classrooms.

Proponents of the bill argued it would address issues exploited by the pandemic and provide aid to those who need it most. Opponents said the wide-open eligibility requirements would mean private schools can pick and choose students, leaving public schools with those struggling the most.

“We need to make sure that in a bill that would try to move some kids into what might be a better environment, we don’t undermine the system left for those who won’t have that other option,” said Mark Tallman, associate executive director for advocacy and communications for the Kansas Association of School Boards. “The most challenging, the most difficult behavioral problems, the deepest special need kids are the ones who will be left in the K-12 system, and then when we look at the results, do we call those failing schools?”

The House K-12 Budget Committee heard testimony Monday on the proposed measure, the second such “voucher bill” the panel has heard in recent weeks. Seven individuals testified in favor, and seven testified against, with several more providing written testimony on the bill.

Beyond those in remote or hybrid learning, students who qualify for free or reduced-price lunch or are deemed “at-risk” by their school district would be eligible. Those in the program would be required to re-qualify yearly.

Once a district transitions back to in-person learning, pupils in that district would potentially lose their savings account. Even if the field of students is narrowed, public school advocates said, the measure would tank school district funding across the state.

Estimates from the state’s budget office indicate the bill could cost more than $200 million if 10% of public students opted into the program, although some legislators argued there would be cost savings on the back end.

Rep. Sean Tarwater, R-Stilwell, estimated that closer to 2,000 students would enroll in an ESA, based on figures from states that have implemented similar legislation. Tarwater, who sponsored the bill, argued public school funding would increase because of the way districts are weighted in the state formula, and classroom sizes would decrease.

Tallman said eventually financial laws would mean weightings and funding would drop off. With no cap on the program, it would continue to grow, he said.

“If there was a cap, would you support this bill?” Tarwater asked.

Tallman was unable to take a position on behalf of the Kansas Association of School Boards but said some sort of limit would alleviate some concerns.

Opponents also expressed concerns with a lack of data about how students who use school choice programs fare in private schools. They also worried about the fiscal and academic standards private schools are held to.

Under the legislation, participating schools are not required to be accredited, hire certified teachers or use a standard curriculum, said Erin Gould, of Game On for Kansas Schools.

Proponents of the legislation pointed to data showing that students in poverty are doing better than their public school counterparts. Republican legislators pointed to statistics indicating private schools are also better performing, although opponents argued this was because private schools choose which students they accept.

The conversation unfolded just days after an informational hearing heavily focused on the challenges associated with remote learning. While some were critical of the apparent one-sidedness during the informational hearing, Rep. Kristey Williams, a Republican from Augusta and chairwoman of the committee, said a follow-up roundtable scheduled after the hearing was rescheduled to Thursday to invite all voices into the conversation.

“In addition, I invited state board member Jim Porter to share with us about their continuous learning plan prior to our remote learning informational hearing. However, he could not make it,” Williams said. “Also, we invite our KSDE commissioners to all of our meetings and have requested remote learning data and commentary.”

The State Board of Education plans to consider Tuesday recommendations from the Kansas State Department of Education regarding best practices to move students back to in-person learning as soon as possible.

Advocates of the bill to provide private school vouchers argued that remote learning forced by the pandemic shows an immediate need to expand school choice.

Wade Moore Jr., the founder of the Urban Preparatory Academy in Wichita, spoke to how his school’s in-person model has helped low-income families with working parents, so much so that students from area public schools often would come and ask to transfer in.

“They’ve given up because they’ve had problems, they can’t navigate it,” Moore Jr. said. “They don’t have internet, they don’t have a family to monitor them, and so, it has been a real challenge for a lot of students. It has caused a lot of pains.”

In a since-deleted tweet responding to a question about a potential contract extension for Kansas City Chiefs safety Tyrann Mathieu, Mathieu tweeted that he's "probably not" going to get a new deal in … END_OF_DOCUMENT_TOKEN_TO_BE_REPLACED

KANSAS CITY, Mo. — A manhole left uncovered is the source of concern after a woman damaged her car in Kansas City. The single-car crash happened at 11th Street and Tracy Avenue during the busy … END_OF_DOCUMENT_TOKEN_TO_BE_REPLACED

Kansas City, Missouri's COVID-19 emergency order was set to expire at the end of the month. But Mayor Quinton Lucas made it clear Friday that private businesses can still set their own rules.Any … END_OF_DOCUMENT_TOKEN_TO_BE_REPLACED

KANSAS CITY, MO (KCTV/AP) — All restrictions meant to slow the spread of the coronavirus were being rescinded as of midday Friday in Kansas City, Missouri, following guidance from the U.S. Centers for … END_OF_DOCUMENT_TOKEN_TO_BE_REPLACED