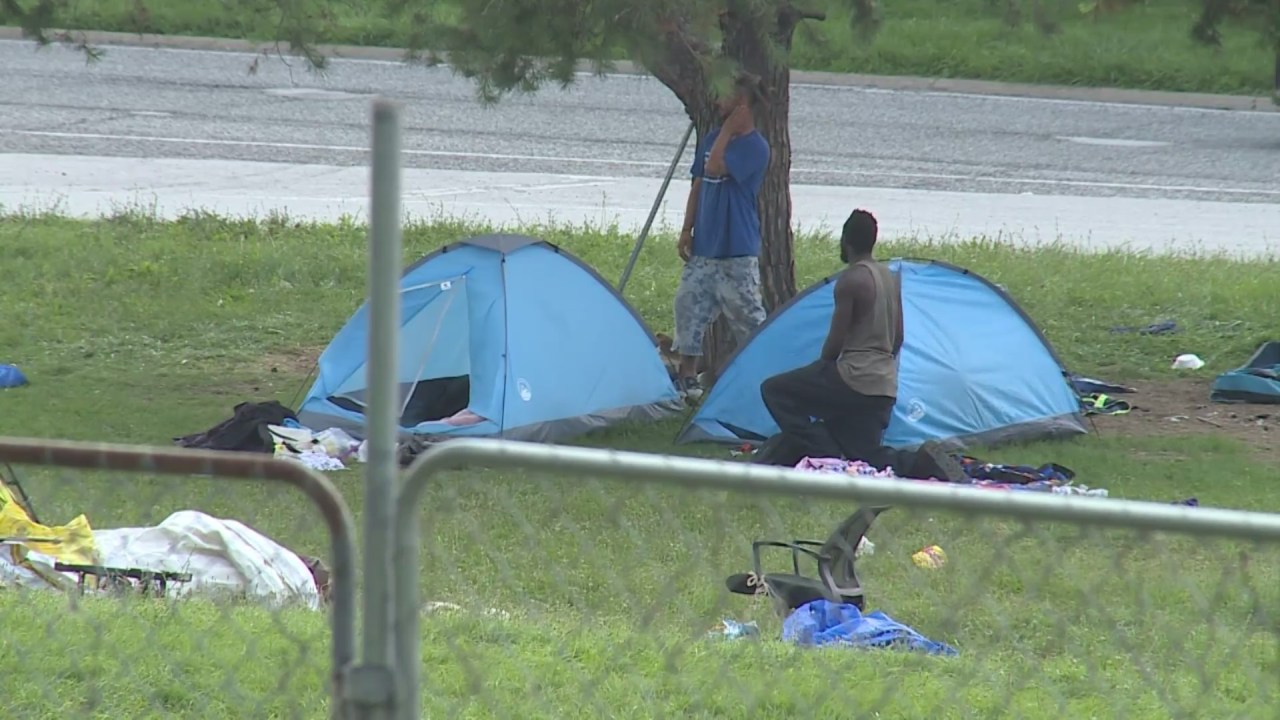 The tents located at Paseo Boulevard and Independence Avenue have been growing for months and according to neighbors even more in the last week.

“It’s not safe for the folks that are camping there it sits right in the middle of an interstate. On an off-ramp. It’s not safe for anybody for that to be a campsite,” said Bobbi Baker, President and CEO of the Northeast Chamber of Commerce.

The site started with panhandlers and now has more than seven tents and a growing amount of people.

In the letter obtained by FOX4, Dr. Marc Hahn detailed the encampment as being a ‘clear and present danger’ as more than 700 students returned for in-person classes.

He writes, “the encampment is located withing inches of the pavement with a large volume of cars passing at high rates of speed. This puts both the homeless and the driving public at risk.”

Hahn describes the situation as a n ‘existential threat to KCU,’ one of the oldest and most important institutions in the Old Northeast Neighborhood.

“If it’s predictable, it’s preventable. It’s predictable that somebody is going to get hurt down there, so what are we doing to prevent it,” Baker said. “We’re not trying to throw them under the proverbial bus, but we would like to get them on the bus to places where they can get help, that triangle is not the place for help.”

The city tells FOX4 the area is on their radar as a litter and trash clean-up site. They say this is another busy intersection with safety concerns in the right-of-way.

Public Works conducted a citywide litter cleanup for a homeless camp in Westport citing a public right-of-way concern. Homeless were relocated by bus and offered shelter opportunities and resources.

‘All we want is a proper place to stay’: Homeless community camp gets moved out of Westport

According to a city spokesperson, Monday afternoon, social workers/service providers on scene right now helping people get resources and services and letting folks know they cannot tent in the right-of-way.

KCU also plans to work alongside the city to create long-term solutions to better the area and make everyone, from the people in need, to students safe.

KCU is proud of our 105-year history of commitment to the well-being of Old North East and we work hard to ensure a safe and healthy environment for our students, faculty, staff and all of our neighbors, including those who are currently experiencing homelessness.

I was pleased to hear from city leaders who received my letter detailing the extent of our concerns and to learn they share them. KCU will continue our proactive and collaborative efforts to improve and maintain the safety of the neighborhood for everyone. We look forward to working with elected officials and community leaders as we seek to find long-term solutions that will benefit our entire community.

In a since-deleted tweet responding to a question about a potential contract extension for Kansas City Chiefs safety Tyrann Mathieu, Mathieu tweeted that he's "probably not" going to get a new deal in … END_OF_DOCUMENT_TOKEN_TO_BE_REPLACED

KANSAS CITY, Mo. — A manhole left uncovered is the source of concern after a woman damaged her car in Kansas City. The single-car crash happened at 11th Street and Tracy Avenue during the busy … END_OF_DOCUMENT_TOKEN_TO_BE_REPLACED

Kansas City, Missouri's COVID-19 emergency order was set to expire at the end of the month. But Mayor Quinton Lucas made it clear Friday that private businesses can still set their own rules.Any … END_OF_DOCUMENT_TOKEN_TO_BE_REPLACED

KANSAS CITY, MO (KCTV/AP) — All restrictions meant to slow the spread of the coronavirus were being rescinded as of midday Friday in Kansas City, Missouri, following guidance from the U.S. Centers for … END_OF_DOCUMENT_TOKEN_TO_BE_REPLACED