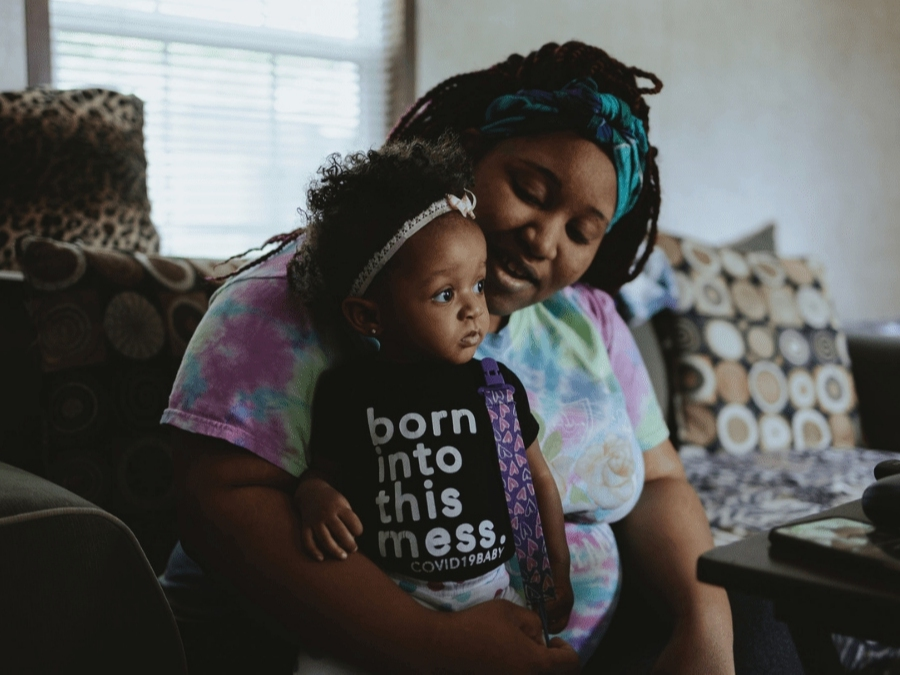 Sakinah Cooper considers herself lucky. She likes the place where she’s living with her two young children and her boyfriend. It’s a two-bedroom rental in a community of converted mobile homes in Kansas City, North.

“At first we were kind of debating about this, but once we actually viewed it, it was pretty nice,” Cooper said. “And moving was pretty simple.”

That was important because early this year Cooper was in a rush to get out of her last place — an apartment in the nearby Regency North complex, where she’d lived for a year and a half.

A drip in the ceiling had opened into a hole, Cooper said, and she saw something in the vents that looked like black mold. She was pregnant, and she and her 7-year-old son came down with persistent coughs.

“I don’t know if he remembers, but we were coughing quite a bit in there,” Cooper said. “It was really an unhealthy situation.”

But it was not an unusual situation. As quality affordable housing gets harder to find in and around Kansas City, hundreds of families live in unhealthy and dangerous places. Last year, when schools and workplaces closed and city officials instructed people to stay home to stop the spread of COVID-19, they unwittingly placed some residents at greater risk of getting sick from environmental causes.

“I probably had a thousand people call me last year in need of housing,” said Kylie Navarro, homeowner services director for Habitat for Humanity of Kansas City.

Some of those callers were desperate to get out of unsafe and unhealthy rental units, she said. Others were being forced to move as leases expired or property changed hands.

Habitat for Humanity fixes up houses and puts families on a path to become homeowners. It also helps people smooth out credit and financial issues so they have a better chance of qualifying for mortgages. But even a good credit record doesn’t guarantee a home.

“I had 16 families who were able to get preapproved for a loan and just could not find anything in their price range that was not in need of a ton of repairs,” Navarro said. “There definitely is not enough affordable housing in Kansas City.”

Gina Chiala, executive director and staff attorney at the Heartland Center for Jobs and Freedom, works with tenants who are threatened with eviction and possible homelessness. She said many families live in deplorable conditions just to keep a roof over their heads.

“Rats, mice, bed bugs, cockroaches are problems for a lot of tenants,” Chiala said. “A lot of these big apartment buildings, the landlords are not treating them proactively to prevent infestations. And those are terrible health threats.”

Chiala and her team also see collapsed ceilings, holes in floors and houses with no heat, running water or electricity.

“We see it all,” she said. “And unfortunately, there’s not enough accountability when it comes to landlords and their duties to provide safe and sanitary housing.”

Historically, that’s been the case. Based on the most recent data from 2016, Princeton University’s Eviction Lab calculated Kansas City’s eviction rate at 4.19, meaning more than four of every 100 rental households were evicted that year. That’s well above the national average of 2.34.

The rate in Kansas City, Kansas, was even higher — 5.6 of every 100 rental households. In Independence, Missouri, the rate was 4.21.

Tenants and advocates say that unscrupulous landlords often find reasons to evict renters who make demands or withhold rent in attempts to get problems corrected. And tenants with an eviction on their record frequently have to settle for even worse conditions.

Housing As A Health Prescription In Kansas City

In a 2020 report, the Center on Budget and Policy Priorities wrote that “poor-quality housing or housing located in neighborhoods in which policymakers and businesses have underinvested can lead to health conditions that worsen not only individual health outcomes but also the public’s health in preventable ways…”

In an earlier report from the center from 2014, it attributed up to 30% of asthma cases to home environmental circumstances.

“Poor housing conditions, chaotic and violent neighborhoods, and worry about housing stability can also cause toxic stress or exacerbate mental health and substance use conditions,” the report adds.

Naser Jouhari, who manages environmental health for the Kansas City Health Department, put it more simply: “Tell me where you live, and I’ll tell you how healthy you will live your life.”
Recognition of the link between housing and health prompted the Health Department a few years ago to propose a rental inspection program, which would be funded by fees from landlords.
Property owners opposed the measure, and it was buried in a City Council committee. But voters signed petitions to put the issue on a ballot, and it passed handily in August 2018.

According to the Health Department’s latest report, by the end of June the Healthy Homes Rental Inspection Program had received more than 4,000 complaints and completed 3,500 inspections since the program got rolling in September 2018.

“Many of the problems were fixed even before we responded, and that’s the goal,” Jouhari said.
He said complaints increased during the pandemic as renters — stuck at home — began noticing leaks and other problems in their units.

Tenants in one apartment building reported a gaseous odor. Inspectors gained access to the basement and found a few feet of sewage water.

“You can tell that this water had been sitting there not only for a few days, it’s been there for years,” Jouhari said. “The violation has been happening for a long time, but now tenants are noticing, and they’re smelling it all day long.”

Cooper contacted Healthy Homes in February to report her dripping ceiling and suspicions of black mold.

She said an inspector responded promptly and cited property owners for three violations.
Regency North management did not respond to a request from The Kansas City Beacon to discuss Cooper’s situation. Cooper said they did some work in her unit after the inspection, but the problems persisted. She complained again, and the management offered to let her break her lease without penalties, so she scrambled to find a new place.

Cooper said her experience with Healthy Homes was positive.

“The lady that came out, she was really nice and she had kids, too, so she understood the urgency of it, and she actually followed up with me even after I moved,” she said.

But not every tenant knows about the rental inspection program. And Healthy Homes has its limitations. It won’t respond to a complaint if a landlord has filed for an eviction, for instance. And some landlords opt to stop renting entirely rather than pay for needed fixes.

“I think it’s an important program,” said Chiala, with the Heartland Center. “But I think it’s very small in the grand scheme of things that needs to change.”

Kansas City’s housing situation has deteriorated beyond the point where it can be fixed by inspections and repairs, she said. There simply aren’t enough safe, sanitary homes at prices that working families can afford.

Sakinah Cooper and her children, A’marie and Dorian, play at their new two-bedroom rental in a community of converted mobile homes in Kansas City, North. (Chase Castor/The Beacon)

“Our housing system is broken,” Chiala said. “Tenants are taking whatever housing they can get because they’re underpaid and rents are too high, and they don’t have options.”

That was the case before the pandemic, and Chiala and others think it may get worse once a final federal moratorium on evictions is lifted July 31.

Chiala’s team and lawyers from Legal Aid of Western Missouri plan to visit courts when the eviction docket is in session to inform tenants of their rights — something they started a couple years before the pandemic.

But those efforts, like the city’s rental inspections and Habitat for Humanity’s program to get lower-income families qualified for mortgages, help small numbers of people, and often assistance is temporary. They fall far short of the sweeping policy changes that would be needed to increase Kansas City’s affordable housing supply.

While the pandemic drove home to many Kansas Citians how unhealthy their housing situations are, the region has yet to use that knowledge as an opportunity for bold action.

“We are seeing some small steps in the right direction,” Chiala said. “But it’s up to all of us to continue pushing and fighting for the working conditions, the housing conditions and the health care that everybody needs to just be able to live a humane life.”

For help with your landlord or legal advice, you can contact:

If you need help with homeownership counseling or need home repairs, you can contact:

This piece is part of a national collaboration that includes the Institute for Nonprofit News, The Beacon/KCUR; Bridge Michigan/Side Effects Public Media; Cicero Independiente/South Side Weekly; Detour Detroit/Planet Detroit/Tostada Magazine; Evanston RoundTable/Growing Community Media; Madison 365/Wausau Pilot & Review; and MinnPost/Sahan Journal. The project was made possible by a grant from the Robert Wood Johnson Foundation with additional support from INN’s Amplify News Project and the Solutions Journalism Network.

Brittany Callan contributed to this story.

In a since-deleted tweet responding to a question about a potential contract extension for Kansas City Chiefs safety Tyrann Mathieu, Mathieu tweeted that he's "probably not" going to get a new deal in … END_OF_DOCUMENT_TOKEN_TO_BE_REPLACED

KANSAS CITY, Mo. — A manhole left uncovered is the source of concern after a woman damaged her car in Kansas City. The single-car crash happened at 11th Street and Tracy Avenue during the busy … END_OF_DOCUMENT_TOKEN_TO_BE_REPLACED

Kansas City, Missouri's COVID-19 emergency order was set to expire at the end of the month. But Mayor Quinton Lucas made it clear Friday that private businesses can still set their own rules.Any … END_OF_DOCUMENT_TOKEN_TO_BE_REPLACED

KANSAS CITY, MO (KCTV/AP) — All restrictions meant to slow the spread of the coronavirus were being rescinded as of midday Friday in Kansas City, Missouri, following guidance from the U.S. Centers for … END_OF_DOCUMENT_TOKEN_TO_BE_REPLACED