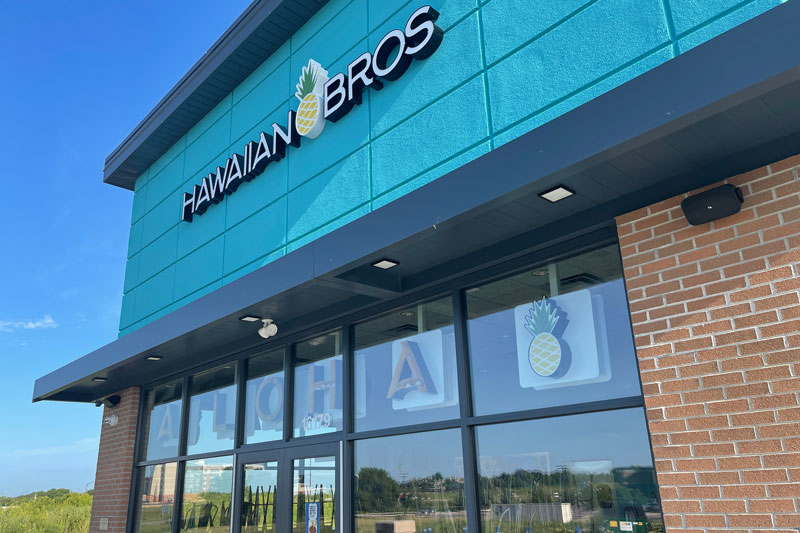 Hawaiian Bros Island Grill in Lenexa’s Sonoma Plaza is gearing up for a grand opening — featuring giveaways — on Aug. 24.

The latest tenant in Lenexa’s Sonoma Plaza is on the verge of opening, and it’s an eatery familiar to anyone who has been paying attention to KC area restaurant developments in recent months.

It will open next door to a Verizon store, Chipotle and Starbucks at 16179 W. 87th Street Parkway.

The Sonoma Plaza area is just east of the City Center development, with Interstate 435 in between.

This new Lenexa location is the third Johnson County location after the Overland Park and Shawnee stores.

A second Overland Park location is in the works at 13680 Metcalf Avenue off 135th Street.

The Lenexa location opens to the public on Tuesday at 11 a.m., but the store hosted a special opening weekend for local first responders, medical personnel, academic staff, students and local businesses to recognize their efforts during the COVID-19 pandemic.

On Tuesday, Aug. 24, the first 100 guests in line at the Lenexa location on opening day will receive a gift card ranging from $25 to $500, according to a company press release.

And one guest will also receive free Hawaiian Bros for life.

In a since-deleted tweet responding to a question about a potential contract extension for Kansas City Chiefs safety Tyrann Mathieu, Mathieu tweeted that he's "probably not" going to get a new deal in … END_OF_DOCUMENT_TOKEN_TO_BE_REPLACED

KANSAS CITY, Mo. — A manhole left uncovered is the source of concern after a woman damaged her car in Kansas City. The single-car crash happened at 11th Street and Tracy Avenue during the busy … END_OF_DOCUMENT_TOKEN_TO_BE_REPLACED

Kansas City, Missouri's COVID-19 emergency order was set to expire at the end of the month. But Mayor Quinton Lucas made it clear Friday that private businesses can still set their own rules.Any … END_OF_DOCUMENT_TOKEN_TO_BE_REPLACED

KANSAS CITY, MO (KCTV/AP) — All restrictions meant to slow the spread of the coronavirus were being rescinded as of midday Friday in Kansas City, Missouri, following guidance from the U.S. Centers for … END_OF_DOCUMENT_TOKEN_TO_BE_REPLACED