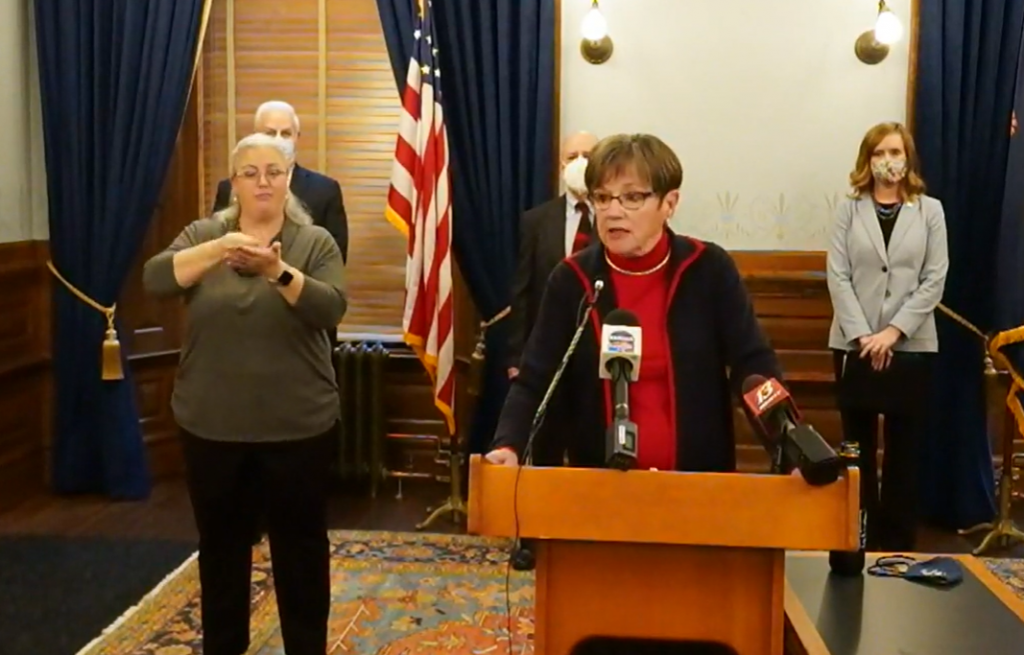 TOPEKA — Gov. Laura Kelly and Democratic legislative leaders urged the Kansas Senate to include in a mammoth tax-cut bill Tuesday a two-year expansion of the standard deduction on state income taxes.

The proposal was outlined in advance of debate on the Senate floor on Senate Bill 22 containing a series of tax reforms previously vetoed by the governor. The bill, Democrats contend, would reduce state tax revenue by $423 million. During the 2021 legislative session, Republican legislators returned to ideas rejected by Kelly because they secured two-thirds majorities in the House and Senate needed to override a new veto.

Kelly said the Senate bill, if not amended with the income tax deduction applicable to more than 94% of Kansas taxpayers, would deliver tax benefits to the top 6% of Kansans taxpayers. She said the Democrats’ amendment would be revenue neutral because it incorporated tax adjustments capable of generating $97 million annually to cover changes to the standard deduction.

“We have seen what happens in Kansas when reckless tax cut bills are passed. Our schools, our roads, our pension system, our mental health and other safety net services take the hit,” the governor said. “It is unthinkable that legislative leadership, during a health and economic crisis the likes of which we haven’t seen for 100 years, when we are trying to steer Kansas toward recovery from the pandemic, that they would even consider such action.”

Senate Bill 22 was named by Republican lawmakers as the RELIEF Act, or Rebuilding Employers and Livelihoods while Investing in Everyone’s Future Act. It incorporated income tax law on itemized deductions, business income as well as a business expensing deduction.

Beginning in tax year 2020, the bill would provide individual income taxpayers the option of claiming itemized deductions on Kansas tax returns regardless of whether deductions were itemized for federal income tax purposes. This would allow Kansans to take the higher standard deduction on federal tax returns signed into law by President Donald Trump, while preserving financial benefits of itemizing on state income tax form. Under existing Kansas law, taxpayers must remain coupled to either the standard or itemized approach on both the federal and state returns.

The bill also would provide in tax year 2021 an exemption for business interest, capital contributions and Federal Deposit Insurance Corporation premiums. It would make business expenses on meals tax deductible. It would clarify the federal Paycheck Protection Program loans during the COVID-19 pandemic would be exempt from taxation. The bill also would make clear Kansans victimized during the pandemic by unemployment insurance fraud wouldn’t be held liable for taxes on bogus payments to identity theft criminals.

Senate Minority Leader Dinah Sykes, a Democrat from Lenexa, said the amendment outlined by the governor would be financed by preventing out-of-state retailers from dodging tax on sales to Kansas customers. The proposal also would apply a state tax on digital products such as video streaming services.

“At a time when we’re facing huge unemployment rates and an unsteady economy, we do not need tax cuts for the rich which have no impact on unemployment,” Sykes said. “At a time when we’re facing economic uncertainty, we do not need to repeat failed tax experiments which studies have shown, and which we have seen firsthand here in Kansas, have no impact on economic growth.”

House Minority Leader Tom Sawyer, a Democrat from Wichita, said during the news conference at the Capitol with Kelly and Sykes that Senate Republicans were inappropriately fixated on delivering hundreds of millions of dollars in tax reductions to multinational corporations in Senate Bill 22.

“The vast majority of Kansans would receive no tax relief. We will always continue to fight for tax cuts that help working Kansans lessen their financial burden,” Sawyer said.

KANSAS CITY, Mo. — The environment, children and smoking are issues Vari Patel and three other teens from the Kansas City metro felt needed attention so people can live healthier lives. "And when … END_OF_DOCUMENT_TOKEN_TO_BE_REPLACED

KANSAS CITY, Mo. — Kansas City, Missouri, Mayor Quinton Lucas confirmed Monday not only that he’d been married earlier this month — but that he and his wife welcomed a baby boy, too. In a post to … END_OF_DOCUMENT_TOKEN_TO_BE_REPLACED

KANSAS CITY, Mo. — Kansas City, Missouri, leaders once again will look into renaming city streets in honor of Dr. Martin Luther King Jr. The city's Board of Parks and Recreation Commissioners will … END_OF_DOCUMENT_TOKEN_TO_BE_REPLACED