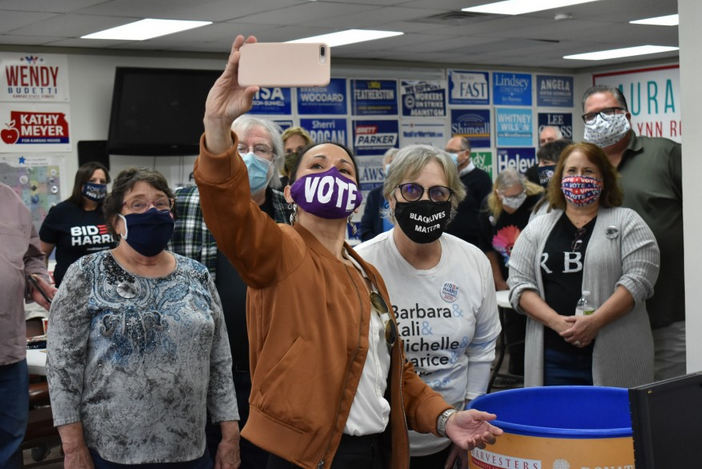 U.S. Rep. Sharice Davids has now won Kansas’ 3rd Congressional District twice. But Republicans in control of redistricting in Kansas may attempt to change that by gerrymandering her district to become unwinnable. Carlos Moreno / KCUR 89.3

Redrawing congressional lines will fall to the GOP-controlled Kan. Legislature

TOPEKA — When Republicans in Congress blocked debate
on the Democratic-led elections overhaul bill last week, it dashed
U.S.Rep. Sharice Davids’ hopes that her district could be redrawn by an independent commission.

Instead,
the Republican-controlled Kansas Legislature looks poised to draw maps
used for the 2022 election and likely to determine political careers for
the next decade.

With a non-partisan panel charting the new
districts based on the 2020 Census, Davids could expect to run for
re-election in a district fairly similar to the one that elected her to
the U.S. House twice.

With redistricting left to state lawmakers,
the Republicans who dominate the Legislature have more freedom to
gerrymander — the practice of manipulating a voting district to ensure a
favorable outcome for one party. Davids told MSNBC in early June she’s worried that state Republicans are “saying, ‘If you can’t beat ‘em, cheat ‘em.’”

Former state Senate President Susan Wagle said nearly as much to a group of conservatives in Wichita last fall.

Gov. Laura Kelly can veto the redistricting plan. But Republicans would have the votes to override her.

“We can do that, I guarantee you,” Wagle said. “We can draw four Republican congressional maps.”

That video went viral. Democrats and The Kansas City Star editorial board alleged Republicans were saying the quiet part out loud.

Kansas is one of 29 states
where the state legislature wields total control over redrawing the
lines of both state legislative and congressional districts. For now,
the 2020 Census data is delayed. That forces lawmakers to contemplate
whether to begin holding town halls across the state for public input on
the new maps without the latest population numbers. All the information
the state needs to draw new maps should arrive by the end of September.

Lawmakers
could theoretically begin to work with the state’s legislative research
department to draft maps then. But that process could remain behind
closed doors until legislators return to session next January. Here are
four strategies that the Republican-controlled body may use to oust
Davids from her seat:

Kansas’ 1st
Congressional District, which stretches from Emporia to the Colorado
border, has lost population over the last decade while Kansas City
commuter counties like Johnson and Wyandotte have grown. That change
will need to be reconciled in new maps. The Kansas Legislative Research
Department says each of Kansas’ four congressional districts will need
to have roughly 734,470 people.

Republicans could dilute the
strength of Johnson County, the state’s bluest and most populous county,
by adding part of Johnson County to the state’s 2nd Congressional
District. But that could put Republican U.S. Rep. Jake LaTurner, who
represents Topeka and Lawrence, in jeopardy by making his district more
Democratic.

Michael Smith, a political science professor at
Emporia State University, said you’d have to do more than strip out
Wyandotte County to make the 3rd District loseable for Davids given her
vote totals and President Joe Biden’s eight-point victory there.

“You have to split Johnson County in order to achieve that,” Smith said.

Yet
that risks infuriating constituents and groups that want to remain
together in the county that’s home to more than 20% of the state’s
population and produces a quarter of its GDP, said Smith.

“I absolutely think that there are some individuals in the Legislature that will want to give it a try,” Smith said.

State
Sen. Ethan Corson, a Democrat from Johnson County and former executive
director of the state party, said shifting Wyandotte out of the district
could backfire on Republicans.

Democratic
Gov. Laura Kelly can veto any maps that don’t keep counties whole,
dilute minority voting strength or don’t keep districts “clear and
contiguous” as prioritized in the redistricting guidelines used by the state in 2002 and 2012.

But
after winning seats in the 2020 elections, Kansas Republicans have an
even stronger supermajority in the Legislature. If Kelly vetoed a map
that endangers Rep. Davids, they could override her. However, the Kansas
Supreme Court will still need to approve the final maps.

Running out the clock

A
dramatically less plausible fourth strategy for Republicans would be to
stall and cross their fingers that Kelly isn’t re-elected to a second
term. Then a Republican governor could sign off on their maps.

Ten years ago, Kansas was the last state
to draw its congressional districts because of a dispute between
Republicans about where to move Manhattan. Federal courts intervened and
drew the current maps.

But congressional and state legislative
candidates are required to file to run for office by June 1, 2022, so
maps need to be drawn before the end of next year’s session in May.

“The
courts will run out of patience, the federal courts in particular,”
Smith said. So, running out the clock really isn’t a practical option
because the courts will just “draw the district if they drag this out
too long.”

Abigail Censky is the political reporter for the Kansas News Service. You can follow her on Twitter @AbigailCensky or email her at [email protected]

In a since-deleted tweet responding to a question about a potential contract extension for Kansas City Chiefs safety Tyrann Mathieu, Mathieu tweeted that he's "probably not" going to get a new deal in … END_OF_DOCUMENT_TOKEN_TO_BE_REPLACED

KANSAS CITY, Mo. — A manhole left uncovered is the source of concern after a woman damaged her car in Kansas City. The single-car crash happened at 11th Street and Tracy Avenue during the busy … END_OF_DOCUMENT_TOKEN_TO_BE_REPLACED

Kansas City, Missouri's COVID-19 emergency order was set to expire at the end of the month. But Mayor Quinton Lucas made it clear Friday that private businesses can still set their own rules.Any … END_OF_DOCUMENT_TOKEN_TO_BE_REPLACED

KANSAS CITY, MO (KCTV/AP) — All restrictions meant to slow the spread of the coronavirus were being rescinded as of midday Friday in Kansas City, Missouri, following guidance from the U.S. Centers for … END_OF_DOCUMENT_TOKEN_TO_BE_REPLACED