Russell Hill was raised to mind his own business. Apart from signing a few petitions here and there, the Independence, Missouri, resident had never gotten involved in any social movements.

That changed last May when the 39-year-old, and the rest of the world, watched video of a former Minneapolis police officer murder George Floyd. Hill said he couldn’t unsee it.

“I’m a white guy, I’m from Missouri, my family’s super-conservative. We don’t talk about race in my family. Like, that’s just not a thing that has come up — it doesn’t come up,” he said. “And with George Floyd, I started asking questions.”

For many Americans like Hill, who had never paid much attention to racial justice, the murder of George Floyd was pivotal.

Before long, Hill had found someone through Facebook who was selling Black Lives Matter merchandise out of a print shop.

“And I was like, ‘Well, give me some of those signs. I’ll put them in the yard.’ I have a corner lot in front of an intersection, there’s a lot of traffic that goes by my house,” he said. “And that was the beginning of our relationship.”

Hill, a delivery driver, isn’t discouraged when the signs occasionally go missing — he keeps a stack of extras in his garage. It’s just more money to a good cause, he said.

And while sticking a sign in the yard can seem simplistic, it can also help sway public opinion, according to Emmanuel Cannady, who studies social movements at the University of Notre Dame. It’s a very public way of saying, this is an issue we should care about.

Patricia Brown-Dixon has positioned a Black Lives Matter sign on her patio with the hopes that it makes the wealthy white people in her neighborhood uncomfortable.

Patricia Brown-Dixon’s sign is home-made — “Black Lives Matter” in big purple lettering on an orange background — and isn’t only about showing support.

“I have taped it on my deck window so that my neighbors, who are mostly affluent and rich, which I’m not, can see it and just be reminded,” she said. “And I hope it rankles their nerves. I hope they hate seeing it. I hope they think, ‘Oh no, not in our neighborhood.’”

Brown-Dixon is African American and lives near the Plaza, where some of Kansas City’s biggest protests took place. But the retired Small Business Administration appointee grew up in segregated Arkansas.

She said Floyd’s murder overwhelmed her. Afterwards, Brown-Dixon protested for the first time in her life.

“It’s just like living while Black gets you killed. And the George Floyd thing was just the last straw for me,” she said.

“In the United States alone about 7,750 demonstrations happened,” he said. “You couldn’t go anywhere last summer without hearing the phrase ‘Black Lives Matter.’”

Americans of all stripes heard the messaging, too, he said, and many responded — even if they didn’t put out a sign, or agree with the actions of protestors.

“I’m sure there’s some police brutality out there, and honestly I do believe that Blacks are treated differently than whites,” said Bryan Poston, a white 61-year-old who lives in suburban Olathe, Kansas. “This rioting might make us more aware of it, but I don’t think that’s the cure.”

Stephen McBride works in the operations department at T-Mobile Center in downtown Kansas City. The 53-year-old displays a Black Lives Matter flag in the front window of his house, near Prospect Avenue and Emanuel Cleaver II Boulevard. He also has a smaller sign in the yard that reads, “Thank you first responders for being essential!”

“And that’s been out there even longer than the Black Lives Matter banner,” he said. “A lot of people would say that, you know, us Black people hate the police and hate anyone in public service, and that’s not true. … We don’t hate the police and stuff, but we just expect them to treat us with respect.”

The banner, he said, is a reminder to himself and others in the Black community of how important they are. 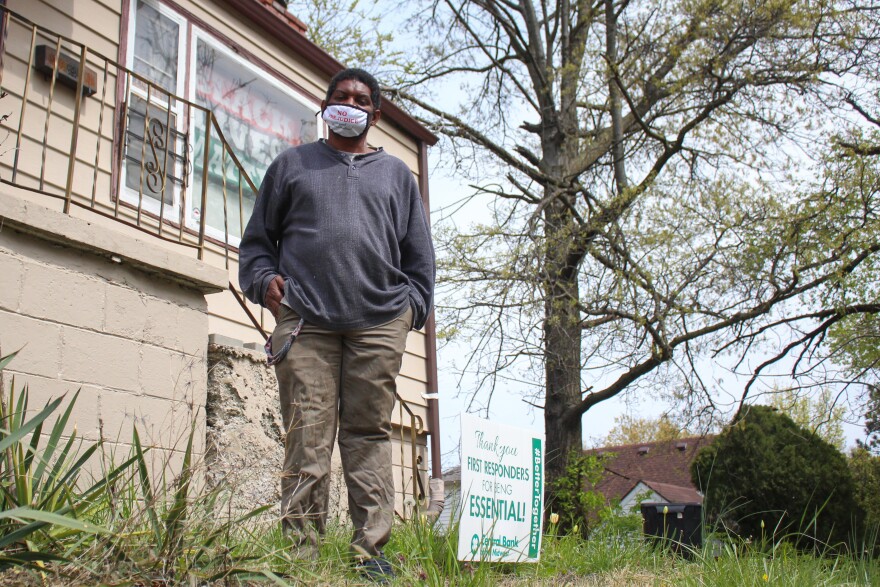 Stephen McBride displays a Black Lives Matter flag alongside a yard sign expressing solidarity with first responders. “A lot of people would say that us Black people hate the police and hate anyone in public service, and that’s not true,” he said.

So after a year of upheaval and unrest, are we any closer to a new understanding?

Rebecca Maddox is a white, stay-at-home mom in the Brookside neighborhood. She expressed what many people were feeling.

“When I put up the Black Lives Matter sign, I was thinking like, ‘I wonder when I’ll take this down? Maybe after the election in 2020,’” she said. “But we’re so far from social justice, I feel like, yeah, I don’t know when we’ll take it down. Maybe when police stop killing Black people, that would be — yeah.”

Where the rubber meets the road

Cindy and Brad Kuhlman are also white and live with their four children in Mission Hills, Kansas. It was their kids who first expressed an interest in getting involved in the racial justice movement last year.

The two attorneys pointed to some steps they and others have taken in the right direction.

“We go to a protest, we read, I listen to Emmanuel Acho talk about his ‘Uncomfortable Conversations with a Black Man.’ You try to educate yourself, you put a sign in your yard, but — I don’t know, is it enough?” Cindy Kuhlman asked.

“I mean, we talk about it a lot with our family. It’s a big point of conversation with our friends, which I think is all beneficial,” said Brad Kuhlman. “We have seen changes in some of our professional organizations, which are now focusing more on white privilege, institutionalized racism, systematic issues.”

But can discussion, education, and protest repair the kind of racism that some African Americans have lived with their whole lives and help establish racial justice in a country that’s struggled with it for so long?

If substantive change is to happen, that’s where the rubber will meet the road, Cannady said.

76-year-old Dr. Barbara Johnson, who is African American, put a sign in her yard, but she’s never protested. 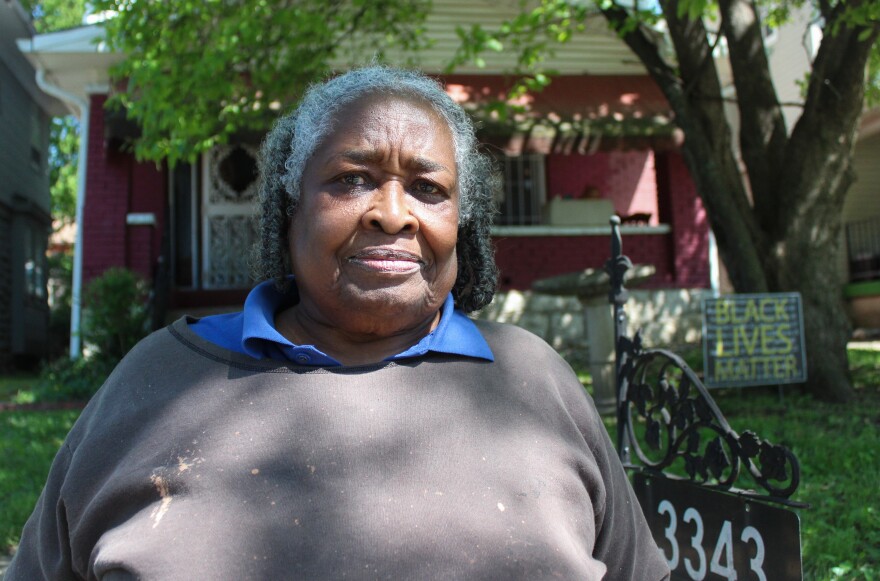 Dr. Barbara Johnson has seen her Oak Park neighborhood go from a thriving Black community to one filled with vacant lots and dilapidated homes. Her Black Lives Matter sign was a notice to property developers and police alike — “I’m still here,” she said.

“Now don’t get me wrong, my sisters, they did the marching and stuff. I’m a lung patient, plus I got bionic knees,” she said, watching traffic pass by from her front porch in Kansas City’s Oak Park neighborhood. “They usually spare me those kinds of things because I am the one that is most active in the community.”

Johnson worked for years teaching underserved students how to read, and has a doctorate in education. She wrote her thesis on how African American boys experience Kansas City’s public schools.

“I’ve been crying a lot, because I really see that our boys do not stand a chance. There’s nothing they can do to be in compliance. Nothing. They’re going to die if they [police] stop them,” she said.

If there is an equitable way forward, Johnson said, it’s through more contact and more familiarity across racial lines. It’s the kind of integration many of her relatives experienced serving in the armed forces.

“Because guess what you live together, you fight together — all of a sudden you’re together,” she said. “You can’t help yourself.”

In a since-deleted tweet responding to a question about a potential contract extension for Kansas City Chiefs safety Tyrann Mathieu, Mathieu tweeted that he's "probably not" going to get a new deal in … END_OF_DOCUMENT_TOKEN_TO_BE_REPLACED

When the Kansas City Chiefs selected former Tennessee offensive lineman Trey Smith in the sixth-round, the pick was immediately labeled one of the biggest steals of the draft — and rightfully so. The … END_OF_DOCUMENT_TOKEN_TO_BE_REPLACED

KANSAS CITY, Mo. — A manhole left uncovered is the source of concern after a woman damaged her car in Kansas City. The single-car crash happened at 11th Street and Tracy Avenue during the busy … END_OF_DOCUMENT_TOKEN_TO_BE_REPLACED

Kansas City, Missouri's COVID-19 emergency order was set to expire at the end of the month. But Mayor Quinton Lucas made it clear Friday that private businesses can still set their own rules.Any … END_OF_DOCUMENT_TOKEN_TO_BE_REPLACED