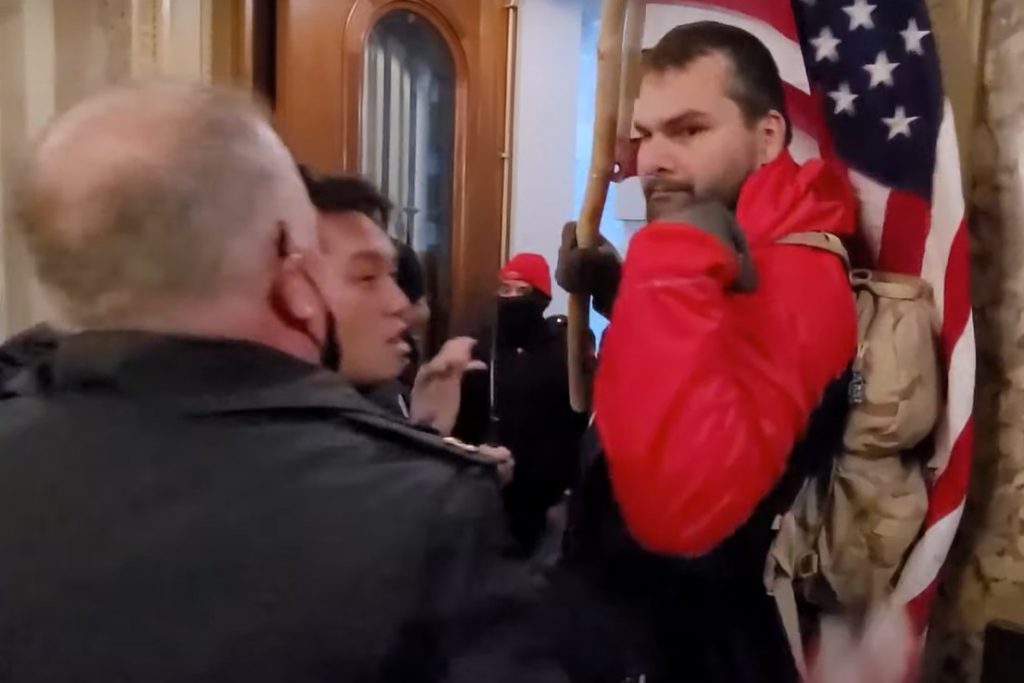 A graphic video shows Pope draped in a flag and standing in a doorway on the east side of the Capitol as police struggle to gain control of an angry mob. Officers can be seen reaching past Pope to spray tear gas, and Pope’s stars-and-stripes hat is knocked to the ground in the chaos.

In a now-deleted Facebook post from after the breach, Pope wrote: “The people wanted their house back, so they took it.”

In an exchange of text messages after the video surfaced, Pope said he remains loyal to his country. He couldn’t be reached for comment Friday because he remains behind bars.

Pope was taken into custody without incident and booked into Shawnee County Jail on federal charges of obstruction or impeding any official proceeding; civil disorder; entering and remaining in a restricted building or grounds; disorderly and disruptive conduct in a restricted building or grounds; disorderly conduct in a capitol building; impeding passage through the capitol grounds of buildings; and parading, demonstrating, or picketing in a capitol building.

FBI agents and Topeka police arrested Pope Friday morning on a warrant issued by the U.S. court in D.C. His brother, Michael Pope, of Sandpoint, Idaho, also was arrested Friday by FBI agents in Salt Lake City and faces the same charges.

At the time of the insurrection, Pope was a graduate teaching assistant at Kansas State University in the Department of Communications Studies. Kansas Reflector has asked a university spokeswoman if his status has changed.

Pope ran for the 2nd District seat on the city council in 2019, losing to Christina Valdivia-Alcala.

Kansas Rep. John Alcala, a Democrat from Topeka who is married to the councilwoman, said FBI agents questioned him about Pope twice in recent weeks. He said the agents had additional photos and video of Pope inside the U.S. Capitol.

Pope is known for his aggressive comments on social media, but Alcala said Pope is quiet in person.

“I’ve had no association with him other than I’ve seen him at events on the campaign trail,” Alcala said. “We had small talk. He was more of a keyboard warrior than he was a face-to-face confrontation guy.”

On Thursday, FBI agents arrested two men in Olathe for their role in the insurrection. William Chrestman and Christopher Kuehn face federal charges of conspiracy, civil disorder, obstruction of an official proceeding,  knowingly entering or remaining in any restricted building or grounds without lawful authority and disorderly conduct on capitol grounds. Chrestman faces an additional charge of threatening to assault a federal law enforcement officer.

Other Kansans who attended the Jan. 6 protest include Laura Tawater, 1st District chairwoman for the Kansas Republican Party; several members of the Blue Shield Facebook group, which opposes police reforms proposed by Black Lives Matter; and a group of 43 supporters of President Donald Trump who chartered a bus from Wichita.

Tawater complained on her own Facebook page about the “RIGGED ELECTION” and the need to take the country back.

“Will miss the presence of so many freedom-loving Patriots from coast to coast that joined together to support President Trump and stand against election fraud,” Tawater wrote when she returned from D.C. “We didn’t riot or hurt anyone like the fake news would have you believe. It’s a lie! We prayed together, served one another, and made our voices heard.”

Glen Burdue, a semi-retired Belle Plaine resident who organized the bus trip, described the group as loyal and patriotic in an interview with Kansas Reflector.

“We are the majority,” Burdue said. “We are mostly God-fearing, hardworking Americans who love each other and who oppose corruption. We will eventually be victorious in taking our country back.”

KANSAS CITY, Mo. — The environment, children and smoking are issues Vari Patel and three other teens from the Kansas City metro felt needed attention so people can live healthier lives. "And when … END_OF_DOCUMENT_TOKEN_TO_BE_REPLACED

KANSAS CITY, Mo. — Kansas City, Missouri, Mayor Quinton Lucas confirmed Monday not only that he’d been married earlier this month — but that he and his wife welcomed a baby boy, too. In a post to … END_OF_DOCUMENT_TOKEN_TO_BE_REPLACED

KANSAS CITY, Mo. — Kansas City, Missouri, leaders once again will look into renaming city streets in honor of Dr. Martin Luther King Jr. The city's Board of Parks and Recreation Commissioners will … END_OF_DOCUMENT_TOKEN_TO_BE_REPLACED