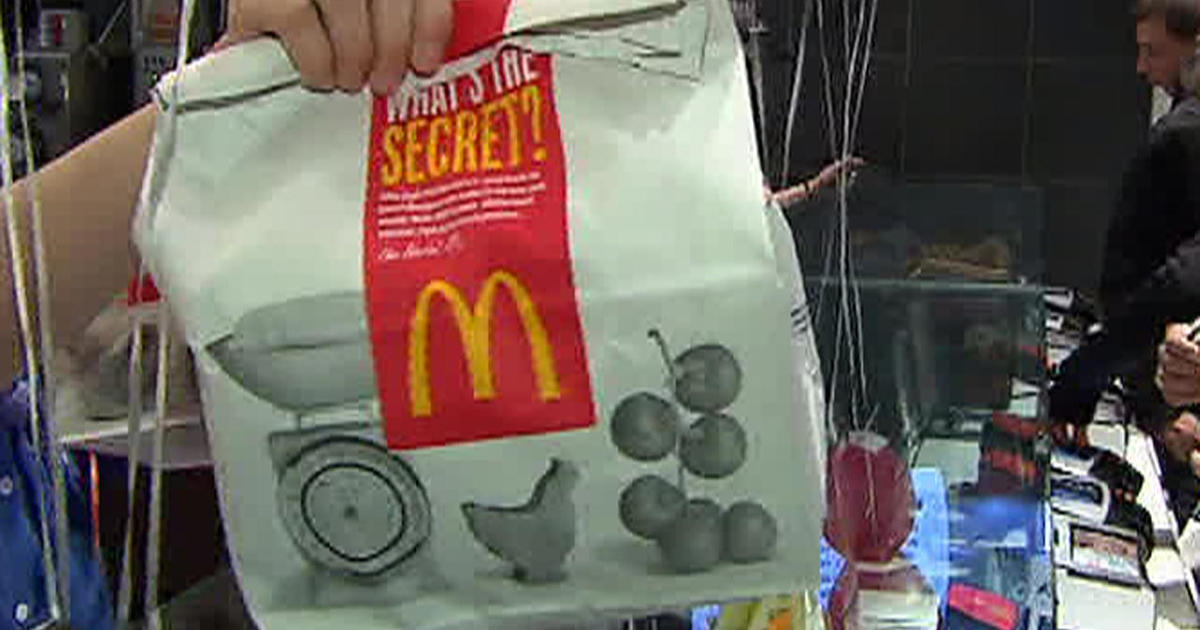 Young women from across the country with remarkably similar reports of abuse and harassment in the workplace at one of America’s largest and most well-known fast food restaurant chains: McDonald’s:

“He would comment on my body and the bodies of other workers and say, ‘I would have sex with you, I would not have sex with her,'” said Emily Anibal.

“First he said, ‘You have beautiful hair’ and started touching my hair,” said Jamelia Fairley. “Then he was physical, then he actually started grabbing my bum.”

Kat Barber said, “Any woman he could get his hands on or be around was taking advantage of this moment.”

Kimberly Lawson said, “It made me feel kind of isolated. I thought I was the only one this was happening to right now, you know what I’m saying? So I just felt all alone.”

Lawson, Fairley, Barber and Anibal have either filed discrimination lawsuits or lawsuits against McDonald’s corporate restaurants or their independent franchises. Each tells a story of persistent and unwanted harassment from male employees.

Barber said, “He used the tongs we made the meal with to grab my breasts.”

“48 Hours” correspondent Erin Moriarty asked, “Did he do this when it was just the two of you, or did other people see it?”

“He didn’t try to hide it at all,” she replied. “It was in front of everyone.”

Gillian Thomas, a senior lawyer for the American Civil Liberties Union, said, “It is hard to believe that it is still so monstrously happening in the open air these days.”

Thomas said hundreds of female employees were subjected to sexual harassment in McDonald’s restaurants, as detailed in up to 100 lawsuits and charges of discrimination.

“The other piece that is particularly shocking at McDonald’s, which of course turns out to be America’s best first job, is how young the victims are – 15, 16, 17 years old,” said Thomas.

“You’re not saying this only happens at McDonald’s?” asked Moriarty.

“Oh, far from it. The food service industry is generally one of the worst for sexual harassment.”

Last year, in a survey of nearly 800 women workers in McDonald’s restaurants and franchises, three quarters said they had been harassed at work. In the same survey commissioned by trade unions, a majority (71%) said they had consequences for reporting behavior.

A company spokesman denied the results, however, on the grounds that the sample size was too small and “not in line with what we see in McDonald’s restaurants.”

And yet there are stories like Jamelia Fairley’s. She said to Moriarty after reporting the harassment, “They gave me 11-15 hours. And I couldn’t work with those hours. It wasn’t enough, it didn’t help me keep my place.”

In late 2018, Fairley, then 24 and a single mom, was working at a McDonald’s in Florida when a new employee started making lewd comments and touching her.

“The first time he touched me, I told him to keep his hands to himself, like ‘don’t touch me,'” she said.

“And how did he react when you said that?” Asked Moriarty.

“He thought it was a joke.”

“Have other people seen this?”

“Yeah,” Fairley replied, “and he’s done it to other women at McDonald’s too. I wasn’t the only one.”

Fairley reported the behavior to both a supervisor and the general manager, and yet, she said, it didn’t stop the offensive behavior: “It got worse, to the point where he poked me like he had me in his groin packed managers stood and watched him do it and they did nothing about it. “

He was eventually moved to another store, she said, but it wasn’t until Fairley reported another incident with another employee, “That particular comment really pissed me off. … He asked me how much it would be to have sex with my daughter and she was only a year old. ”

This employee was fired.
Fairley stayed. She said she needed the job “so I can give her a roof over her head.”

In a corporate video, McDonald’s new CEO Chris Kempczinski says the company wants to be a leader on values: “So now is the time to have this conversation … We’re doing the right thing for the right reasons. I love this one Sentence because it hits you in the stomach. Everyone knows what it means to do the right thing. “

In late 2019, the company released a comprehensive new policy on how to deal with sexual harassment in its corporate businesses. But 95% of McDonald’s are independent franchises, and there the policy is just a “resource” – not a requirement.

Here’s how some past employees describe the sexual harassment training they received:

Kimberly Lawson, who worked at a McDonald’s franchise in Kansas City in 2017 and 2018: “My orientation was a woman, she sat across from me. She had a pile of papers. She said, ‘This is where we’re going to go through. This is really quick. You have to just sign and date everything so we can do that. ‘”

Moriarty asked, “Do you know if you’ve signed anything that sets out the guidelines relating to complaints such as sexual harassment and what to do if you encounter it?”

“I have no idea,” replied Lawson.

We’ve heard the same story over and over again.

Fairley said, “I didn’t get any training at all.”

Emily Anibal said, “I don’t remember or hear about any training.”

Kat Barber said, “There was a page in the policy book that I signed, but nobody looked through it with me.”

Gillian Thomas of the ACLU said: “A policy that is written on a piece of paper and recorded in a manual that is never actually lived in the work environment is worthless.”

For example, an employee of a McDonald’s franchise in Mason, Michigan, could harass colleagues there for years.

Eve Cervantez, an employment lawyer suing McDonald’s and the franchise, said, “This is a case where there was a serial molester, a serial robber. He basically molested every woman who was there.”

Anibal was 17 when she worked at McDonald’s in April 2016 and met Shawn Banks, a shift supervisor.

Moriarty asked, “How often would he comment or touch someone?”

“Pretty much every shift, for most of the shift,” replied Anibal.

“Did you think you just had to put up with it?”

“Yeah, that was kind of an environment that I think was built in this restaurant. That’s normal. And if you don’t like it, you can leave.”

In the spring of 2017, she finally left. Five months later, when Barber (then 18) started working there, Banks was still there a manager.

“No,” said Barber. “If anything, it would make him persist any longer.”

Barber said she reported the behavior to the general manager: “Ordinarily I would either laugh, [or] I am told that I was dramatic. ”

Moriarty asked, “What made you leave in the end?”

Shawn Banks didn’t respond to CBS News’ request for an interview. The owner of the franchise declined through a lawyer to answer written questions.

Moriarty asked Attorney Eve Cervantez“Isn’t that just a question of a bad apple?”

After Anibal and Barber – along with several other women – filed a lawsuit, the franchisee sold its businesses.

Moriarty said, “McDonald’s could say, ‘How can we monitor the environment in each and every one of these McDonald’s?'”

“First, McDonald’s actually puts a great deal of scrutiny on its franchises,” Cervantez replied. “They go to McDonald’s all over the country, they have exactly the same hamburgers and fries.” So you actually have a lot of control. So McDonald’s Corporation could certainly train these executives about sexual harassment and how to deal with it. “

In its statement to CBS News, McDonald’s said it “provides training … for its franchisees” … and “has provided a hotline for all franchisees to make available to their employees”.

If McDonald’s is held liable in the cases filed by these women, the harm may not be material. Nobody made more than $ 14 an hour.

But in a job that some consider petty, Jamelia Fairley said she’s finally being seen and belongs.

Moriarty asked, “Have you ever regretted complaining?”

In a since-deleted tweet responding to a question about a potential contract extension for Kansas City Chiefs safety Tyrann Mathieu, Mathieu tweeted that he's "probably not" going to get a new deal in … END_OF_DOCUMENT_TOKEN_TO_BE_REPLACED

KANSAS CITY, Mo. — A manhole left uncovered is the source of concern after a woman damaged her car in Kansas City. The single-car crash happened at 11th Street and Tracy Avenue during the busy … END_OF_DOCUMENT_TOKEN_TO_BE_REPLACED

Kansas City, Missouri's COVID-19 emergency order was set to expire at the end of the month. But Mayor Quinton Lucas made it clear Friday that private businesses can still set their own rules.Any … END_OF_DOCUMENT_TOKEN_TO_BE_REPLACED

KANSAS CITY, MO (KCTV/AP) — All restrictions meant to slow the spread of the coronavirus were being rescinded as of midday Friday in Kansas City, Missouri, following guidance from the U.S. Centers for … END_OF_DOCUMENT_TOKEN_TO_BE_REPLACED