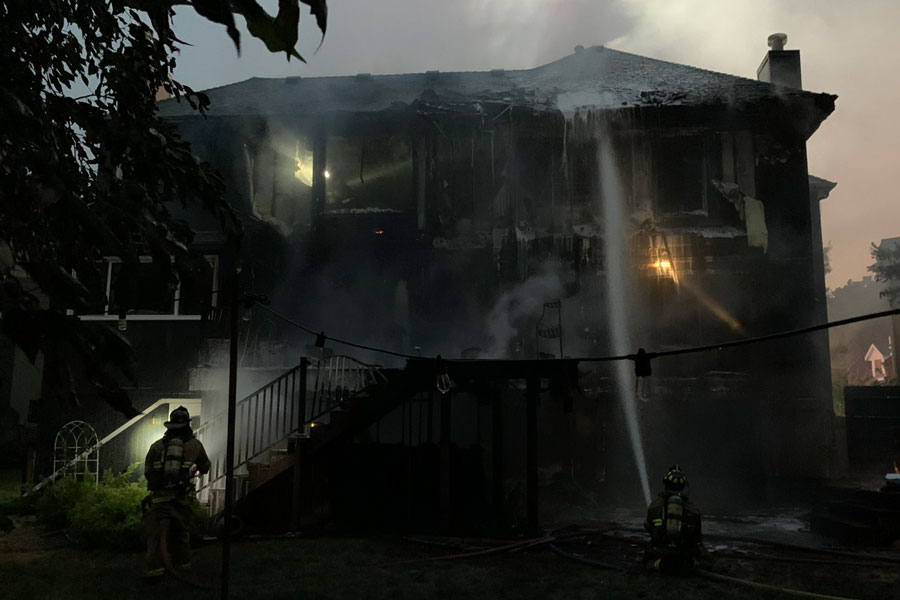 The home in the 126th block of Grandview Street in Overland Park suffered “significant damage,” according to investigators.

Crews were called to the home around 8:30 p.m. Friday, according to an Overland Park Fire Department statement.

The first units on the scene reported heavy smoke coming from the back of the home with all six members of the family out safely when firefighters arrived.

Crews worked for more than an hour on multiple levels of the home to bring the fire under control, according to OPFD.

Firefighters worked to tamp down hotspots until after 10 p.m.

OPFD says the residents reported using a grill in the backyard earlier in the evening and then later discovering a fire on the back deck, prompting them to call 911.

Investigators are still working to determine an official cause of the fire.

OPFD says the family is staying with friends for the time being.

In a since-deleted tweet responding to a question about a potential contract extension for Kansas City Chiefs safety Tyrann Mathieu, Mathieu tweeted that he's "probably not" going to get a new deal in … END_OF_DOCUMENT_TOKEN_TO_BE_REPLACED

KANSAS CITY, Mo. — A manhole left uncovered is the source of concern after a woman damaged her car in Kansas City. The single-car crash happened at 11th Street and Tracy Avenue during the busy … END_OF_DOCUMENT_TOKEN_TO_BE_REPLACED

Kansas City, Missouri's COVID-19 emergency order was set to expire at the end of the month. But Mayor Quinton Lucas made it clear Friday that private businesses can still set their own rules.Any … END_OF_DOCUMENT_TOKEN_TO_BE_REPLACED

KANSAS CITY, MO (KCTV/AP) — All restrictions meant to slow the spread of the coronavirus were being rescinded as of midday Friday in Kansas City, Missouri, following guidance from the U.S. Centers for … END_OF_DOCUMENT_TOKEN_TO_BE_REPLACED