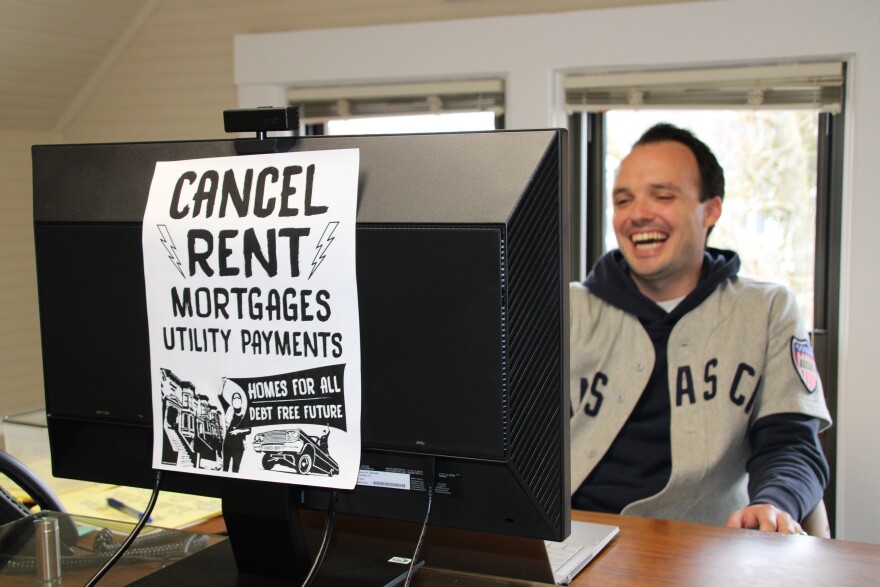 At 51-years-old, Candace Ross said it’s been a long time since she’d struggled to pay her rent. But when the COVID-19 pandemic dragged on this year, Ross faced one financial hardship after another.

A broken leg, catching COVID twice, having to quarantine whenever her daughter was exposed to the virus at school— it all began to take a toll on her ability to work. But her bills continued to pile up.

Already behind on the previous month’s fees, she received a notice in early October that she was being evicted from her south Kansas City apartment when she was unable to make her rent.

“I just didn’t know how I was gonna make it. You know, I just was praying,” Ross said. “I did everything I could do.”

She had already applied for the Kansas City Emergency Rental Assistance Program, but the money wasn’t going to come in quick enough. With a court date set within the month, she didn’t have any time to lose.

That’s when she was connected with the attorneys of the Tenant Representation Initiative, a project spearheaded by the University of Missouri – Kansas City’s School of Law.

The odds are stacked against tenants who don’t have access to legal counsel. While 90% of landlords are represented in court, only 10% of tenants are. Without representation, the majority of renters lose their case.

As the number of pandemic-related evictions rose, the UMKC Law School realized there was a significant need to fill this gap. At the same time, many graduates were struggling to find a job.

“Without a lawyer’s help, a tenant’s not going to very easily be able to navigate the legal system. They’re going to have their stuff put on the curb,” Glesner Fines said.

By partnering with the United Way of Greater Kansas City, the team uses funds granted through federal pandemic legislation to provide rental assistance throughout Jackson County and Kansas City, Missouri.

This assistance allows them to reach settlements with landlords by paying back the rent that tenants’ owe. If an eviction can’t be settled, Glesner Fines said that the lawyers can at least buy renters more time or get the eviction judgement off their record.

Candace Ross says she is happy and relieved to be able to stay in her south Kansas City apartment after getting help from the Truman Fellows program.

“The time that they have isn’t enough for them to address all the problems that they’re facing, but it does give them some time to avoid the trauma of a forcible eviction and to avoid the judgment of eviction that will make it very difficult for them to get housing in the future,” Glesner Fines said.

The legal team has taken on more than 600 clients this year, and estimates that they have successfully settled up to 85% of their cases.

Ross’ is one of their most recent successes. UMKC’s lawyers were able to reach a settlement with her landlord, not only paying back the rent she owed, but providing her with enough rent money to get her through February.

She said the relief felt when she got the call from her lawyer drove her to tears.

“Just a load had been lifted, it’s like a bus had just been removed off my body. Because I felt like I was being ran over by a bus,” Ross said.

If she hadn’t gotten her case settled, Ross said she would have probably had to move into a hotel with her seventeen-year-old daughter and pay a weekly rent. Now that she’s able to stay at her current apartment, she’s grateful that she can save up for a couple months before rent is due again.

Glesner Fines said the Truman Fellow program is not only saving people like Ross from eviction, it’s also training the next generation of attorneys to care about and be educated on public interest work.

John Pipes is just one of the initiative’s former fellows that has gone on to do eviction work full time. He now works as Tenants’ Rights Attorney with the Heartland Center for Jobs and Freedom.

Since the federal eviction moratorium ended in August of 2021, he said they’ve seen an uptick in the number of local eviction filings, but the real change has been how quickly cases move through the court now that there are less protections in place for renters.

“It also means that landlords are maybe more antsy to start the eviction process because they know that they might be able to potentially get the tenant removed and evicted from the property,” Pipes said.

John Pipes, a former Truman Fellow, now has a job in eviction work where he advocates for “universal representation” for tenants.

However, self-described housing provider Stacey Johnson-Cosby said she and other local landlords only turn to eviction as a last resort.

As president of the Kansas City Regional Housing Alliance, a local nonprofit composed of landlords across the area, she said that these legal programs also need to be made available to small-to-medium housing providers like herself that rely on the income from their rentals.

Johnson-Cosby said mediation shouldn’t be needed when an eviction is for nonpayment, since the best way to avoid the problem is to pay the owed rent. With millions of dollars set aside for emergency rental assistance, she said the government is responsible for dispersing those funds.

“The burden should be on the government to do what they need to do to get the money out into our hands, the renter’s and both who need it as soon as humanly possible,” Johnson-Cosby said.

Members of UMKC’s legal team say they understand that landlords need to stay in business too, and they help make that happen by streamlining COVID relief dollars to pay back their client’s rent.

“What do you do when they probably get sold or torn down? And then there’s just even less available housing out there,” Larios said.

However, Pipes said that landlords also have access to federal relief dollars and legal resources that struggling tenants don’t have. If a tenant can’t pay rent, he said they can’t afford an attorney.

That’s why Pipes said his organization is pushing for “universal representation,” enabling every tenant who’s facing eviction to be provided legal counsel.

Pipes said his team is working with Kansas City Councilwoman Andrea Bough on an ordinance that would do just that. Bough said that she plans to introduce the ordinance later this month.

In the meantime, Ross is helping spread the word that UMKC’s legal team can offer help to tenants in need. With a new job and rent payed for a couple more months— she said she finally has peace of mind.

Renters in Jackson County or Kansas City, Missouri in need of legal representation in an eviction case can call United Way of Greater Kansas City at 2-1-1. Your information will be taken and forwarded to the Tenant Representation Initiative.

In a since-deleted tweet responding to a question about a potential contract extension for Kansas City Chiefs safety Tyrann Mathieu, Mathieu tweeted that he's "probably not" going to get a new deal in … END_OF_DOCUMENT_TOKEN_TO_BE_REPLACED

KANSAS CITY, Mo. — A manhole left uncovered is the source of concern after a woman damaged her car in Kansas City. The single-car crash happened at 11th Street and Tracy Avenue during the busy … END_OF_DOCUMENT_TOKEN_TO_BE_REPLACED

Kansas City, Missouri's COVID-19 emergency order was set to expire at the end of the month. But Mayor Quinton Lucas made it clear Friday that private businesses can still set their own rules.Any … END_OF_DOCUMENT_TOKEN_TO_BE_REPLACED

KANSAS CITY, MO (KCTV/AP) — All restrictions meant to slow the spread of the coronavirus were being rescinded as of midday Friday in Kansas City, Missouri, following guidance from the U.S. Centers for … END_OF_DOCUMENT_TOKEN_TO_BE_REPLACED