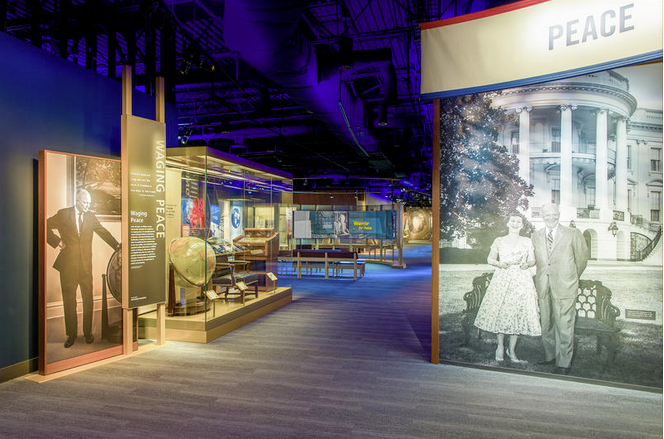 ABILENE — Starting next week, the Eisenhower Presidential Library, Museum and
Boyhood Home will be open Monday through Saturday from 10 a.m. to 2 p.m.

It currently is open during the same hours Wednesday through Saturday because of pandemic restrictions.

“We
are moving forward,” said Dawn Hammatt, the library and museum’s
director. “We have a plan in place, and we are really excited to be able
to do this in a safe and healthy fashion.”

Kansas Sen. Jerry
Moran has been urging the National Archives of Records Administration to
allow the library and museum to open beyond its current 25% capacity
limit for visitors. The agency oversees about a dozen presidential
libraries.

Last week, the Biden administration announced it would
lift the federal restrictions, and agencies can now submit their own
plans for reopening. The National Archives is one of those agencies.

The
Abilene Convention and Visitors Bureau has been using transient guest
tax collections to measure the effect the museum’s reduced capacity has
had on the city. Director Julie Roller Weeks said lodging sales for
Abilene have dropped from $2.5 million in 2018 to $796,000 this year.
Its accounting period for 2021 ends in  September.

“Without
(transient guest tax) revenue, we have a smaller marketing budget and
that ripple is felt throughout the community,” Roller Weeks wrote in an
email.

The restrictions, though, are not all bad.

“You
know those things in your office that you say, ‘I’ll get to it one
day?’” Hammatt said. “Well, we’ve done those things. … and it’s been
fantastic.”

When the pandemic limited in-person visiting, the
Eisenhower Library and Museum increased its virtual reach. Hammatt said
it was able to digitize analog pieces for researchers and participate
with other presidential libraries.

The annual Symphony at Sunset
concert to commemorate D-Day wasn’t possible under COVID-19, but the
museum decided to host a virtual Emerging Scholars D-Day Symposium
instead. It invited scholars such as  doctoral candidates to discuss
their topics of interest.

“What we learned about developing
virtual programs and engaging with guests in a virtual capacity has been
astounding, and I am grateful that we were able to learn these things,”
Hammatt said.

Many museums across the country have experienced
significant losses during the pandemic. The American Alliance of Museums
surveyed 1,000 museum directors, and 75% of them reported that operation income  decreased by an average of 40%.

Hammatt
says museums are safe spaces to have difficult conversations. So, as
the country tries to return to normal, Hammatt also looks forward to
society entering museums once more — both virtually and in person.

“Museums
play a seminal role in the development of our society,” Hammmatt said.
“It’s a place to not only commemorate the past, but more importantly,
learn and support your society as it moves forward in time.”

Katelynn
McIlwain is KMUW’s Korva Coleman Diversity in Journalism intern. She
will be a senior this fall at the University of Missouri.

In a since-deleted tweet responding to a question about a potential contract extension for Kansas City Chiefs safety Tyrann Mathieu, Mathieu tweeted that he's "probably not" going to get a new deal in … END_OF_DOCUMENT_TOKEN_TO_BE_REPLACED

KANSAS CITY, Mo. — A manhole left uncovered is the source of concern after a woman damaged her car in Kansas City. The single-car crash happened at 11th Street and Tracy Avenue during the busy … END_OF_DOCUMENT_TOKEN_TO_BE_REPLACED

Kansas City, Missouri's COVID-19 emergency order was set to expire at the end of the month. But Mayor Quinton Lucas made it clear Friday that private businesses can still set their own rules.Any … END_OF_DOCUMENT_TOKEN_TO_BE_REPLACED

KANSAS CITY, MO (KCTV/AP) — All restrictions meant to slow the spread of the coronavirus were being rescinded as of midday Friday in Kansas City, Missouri, following guidance from the U.S. Centers for … END_OF_DOCUMENT_TOKEN_TO_BE_REPLACED