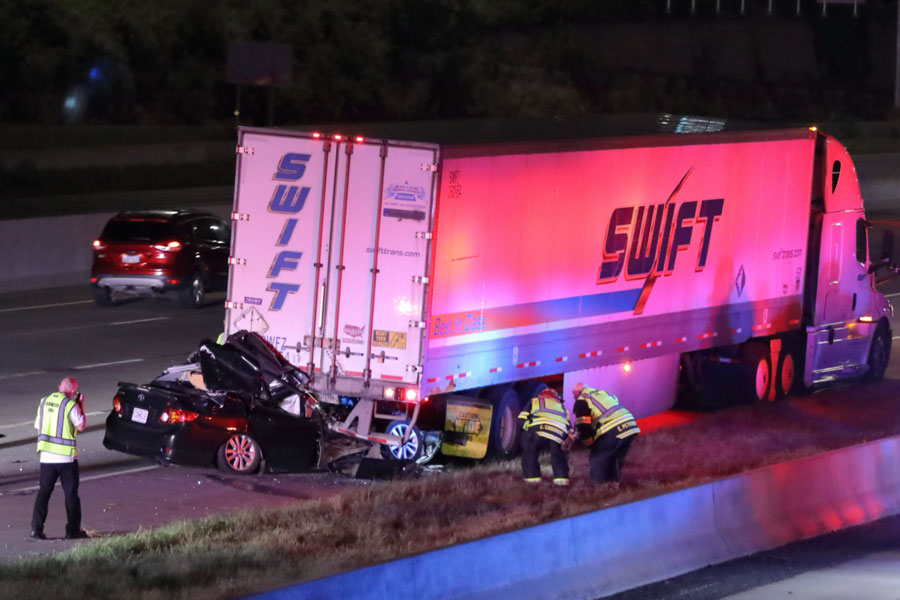 A vehicle crashed into the back of a tractor-trailer Thursday night along westbound I-435 near Roe Avenue. Firefighters from Overland Park and Leawood were able to extricate the driver, a man in his 20s, from the heavily damaged car, and he was transported to a nearby hospital in critical condition. Photo credit Mike Frizzell.

The Overland Park Police Department’s Traffic Safety Unit is investigating after a car crashed into the rear-end of a tractor-trailer late Thursday night, leaving the driver of the car critically injured.

Police, firefighters and paramedics were dispatched to the westbound lanes of Interstate 435 just west of Roe Avenue at 11:20 p.m.

Recorded radio traffic indicates a Leawood officer was first to arrive at the crash. That officer reported the driver of the car was moving but unresponsive.

Firefighters from Overland Park and Leawood fire departments responded and quickly extricated the driver from the heavily damaged car, which could be seen partly wedged underneath the back of the tractor-trailer.

Johnson County Med-Act transported the driver, who was identified as a man in his 20s, to Overland Park Regional Medical Center in critical condition.

The driver of the tractor-trailer was not injured.

Check back with this report for updates as more information becomes available.

In a since-deleted tweet responding to a question about a potential contract extension for Kansas City Chiefs safety Tyrann Mathieu, Mathieu tweeted that he's "probably not" going to get a new deal in … END_OF_DOCUMENT_TOKEN_TO_BE_REPLACED

KANSAS CITY, Mo. — A manhole left uncovered is the source of concern after a woman damaged her car in Kansas City. The single-car crash happened at 11th Street and Tracy Avenue during the busy … END_OF_DOCUMENT_TOKEN_TO_BE_REPLACED

Kansas City, Missouri's COVID-19 emergency order was set to expire at the end of the month. But Mayor Quinton Lucas made it clear Friday that private businesses can still set their own rules.Any … END_OF_DOCUMENT_TOKEN_TO_BE_REPLACED

KANSAS CITY, MO (KCTV/AP) — All restrictions meant to slow the spread of the coronavirus were being rescinded as of midday Friday in Kansas City, Missouri, following guidance from the U.S. Centers for … END_OF_DOCUMENT_TOKEN_TO_BE_REPLACED