Donations have poured in over the past week to an online fundraiser in support of Brinley Hutson, an Overland Park girl whose leg was recently amputated following a rare bacterial infection.

At 12 years old, Hutson has been battling an unpredictable and aggressive bacterial infection for the past few weeks, say those who know her.

The infection was threatening her life as doctors at Children’s Mercy worked to prevent it from spreading. She has had at least nine surgeries and could have more. Doctors amputated her left leg on May 30.

The GoFundMe campaign organized by family friend Brandi England raised $43,000 in one day after she set it up May 31.

As of Tuesday, more than 550 people had donated a total of $76,900. Besides that, the whole community around Brinley — including friends, family and staff at her elementary school — has been supportive and encouraging as the medical team at Children’s Mercy helps her recover.

“Honestly, the generosity and the number of people reaching out has been overwhelming,” England said. “Right now, her mom’s unable to reach out and say ‘thank you’ to people. I know she wants to, but it’s just impossible right now. And even me managing the GoFundMe, the emails I’m getting and people reaching out wanting to help in other ways, it is unreal.”

“I know that her family is so very grateful to everybody who’s praying, who’s donating and who’s finding resources to help Brinley after this,” said Brandi England, a family friend who teaches at Brinley Hutson’s old elementary school. Photo courtesy Brandi England.

England, who is a teacher at Bentwood Elementary in the Olathe School District where Hutson attended, said Hutson is doing much better as of late.

The family is hopeful that doctors have the infection under control now.

“I know that her family is so very grateful to everybody who’s praying, who’s donating and who’s finding resources to help Brinley after this,” England said. “They’re a private family, but this is such a rare thing, just a unique situation. You don’t hear of something like this often, and I think even the medical team that’s working on her, they’re still trying to think outside the box to figure out how to best help Brinley.”

Cause of the infection?

Doctors are also working to figure out the cause of the infection. The family has pieced together at least one potential source.

Hutson got injured and had a deep bruise on her leg during a soccer tournament in the beginning of May. The fever and related symptoms from the infection began a few weeks later.

England said she has full faith that Hutson — a bubbly, encouraging friend and young student-athlete who cares for others — will recover. 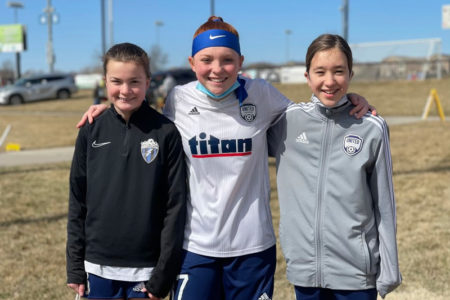 Hutson (center) is an active student-athlete who her former teacher describes as bubbly, encouraging and fearless. Now that the infection appears to have stopped spreading, the family is hopeful for a recovery. Photo courtesy Brandi England.

“This is a speed bump for Brin, but it’s not a stop sign,” England said. “Yes, it’s a defining moment, but this isn’t who she is. She’s so much more, and this community loves her and is going to be here for her regardless, no matter what’s going on. We have her back.”

The funds from the GoFundMe campaign will be used to help pay for Hutson’s medical bills, as well as recovery efforts.

“I have all faith that Brinley is going to be able to do whatever Brinley wants to do because she’s just that kind of kid. She is a force to be reckoned with, and she always has been.”

In a since-deleted tweet responding to a question about a potential contract extension for Kansas City Chiefs safety Tyrann Mathieu, Mathieu tweeted that he's "probably not" going to get a new deal in … END_OF_DOCUMENT_TOKEN_TO_BE_REPLACED

KANSAS CITY, Mo. — A manhole left uncovered is the source of concern after a woman damaged her car in Kansas City. The single-car crash happened at 11th Street and Tracy Avenue during the busy … END_OF_DOCUMENT_TOKEN_TO_BE_REPLACED

Kansas City, Missouri's COVID-19 emergency order was set to expire at the end of the month. But Mayor Quinton Lucas made it clear Friday that private businesses can still set their own rules.Any … END_OF_DOCUMENT_TOKEN_TO_BE_REPLACED

KANSAS CITY, MO (KCTV/AP) — All restrictions meant to slow the spread of the coronavirus were being rescinded as of midday Friday in Kansas City, Missouri, following guidance from the U.S. Centers for … END_OF_DOCUMENT_TOKEN_TO_BE_REPLACED