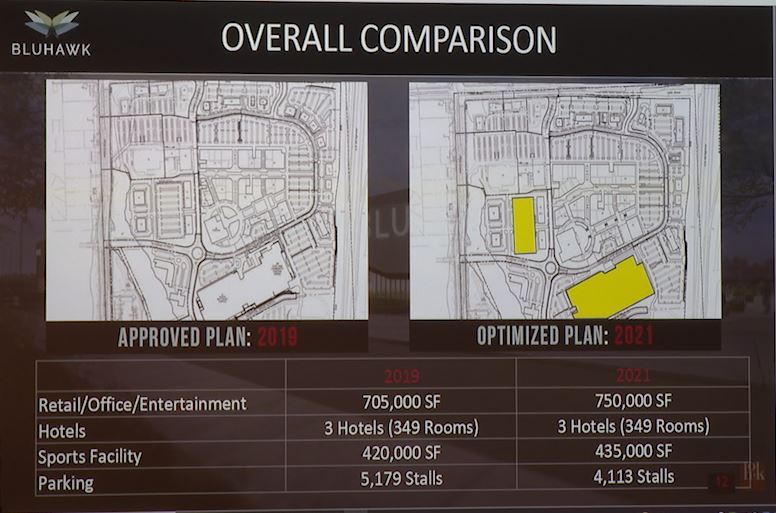 OVERLAND PARK, Kan. — With the clock ticking ahead of state-wide policy change, the city of Overland Park is requesting roughly $71 million in bonds to build a multi-sport complex in the southern part of the city.

On Monday, the Overland Park City Council voted 10-2, approving an ordinance to amend the STAR bond plan for the Bluhawk complex. The council also voted 9-3 to approve an amended development agreement for the project.

In 2019, the Overland Park City Council voted to allocate $77 million in STAR bonds to help build the complex. Now that developers Price Brothers Management have adjusted their plan, they will be required to submit a new proposal to receive bonds to help pay for the project.

The developers are hopeful the Kansas Department of Commerce will approve the new application before new policies take effect for STAR bond applicants on July 1.

Under the amended proposal, the project will now be built in two phases.

The total cost of the project is expected to increase from $407.3 million to $434.2 million, with an increase of private contribution. Price Brothers Management is now requesting $70.6 million in bonds, dropping from the original $77.1 million request made in 2019.

The proposed complex site is located near the southwest corner of 159th Street and U.S. 69 Highway. The complex will include hotels, retail space and a 435,000-square-foot multisport complex.

“These changes are actually fairly simple in nature. The modifications to the project plan are essentially three things. One we’re combining the arena and multisports complex together by integrating the arena components into a larger, more flexible multisport facility,” Pathik said.

“Two, we are introducing the concept of phasing. The revised multisport complex will not be built all at the same time. It would be constructed and delivered in phases. Three, the budget for this project has evolved, and it requires changes along with updates to feasibility analysis.”

The revised project plan will merge the standalone arena with the main multisport complex. The complex will feature eight basketball courts (which can be converted to 16 volleyball courts), 4,000 flexible seating options on the court arena and 1,500 seats for the ice arena.

The new plan will reduce the number of available ice rinks from three to two. Developers said they will not be constructing the additional parking garage that was listed in the previous site plan.

“The annual visits just for Phase 1 will be 496,000 annual visits. What that produces over the 10 years is $139 million in new direct spending by visitors who do not live here,” Pathik said.

Pathik said once Phase 2 is complete, that number is estimated to grow to 816,000 out-of-town visitors annually. 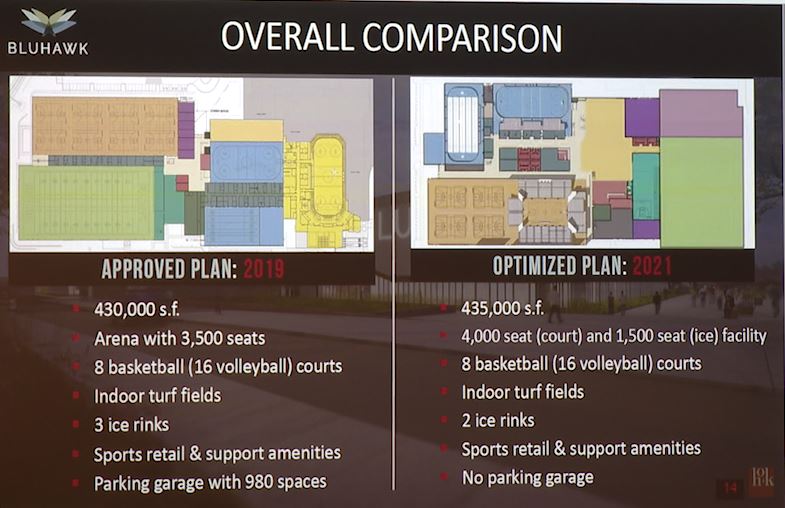 “Direct annual sales and property taxes to the city during the period of time in which the STAR bonds are still outstanding are projected to stabilize for the full project at about $750,000 per year to the city,” said John Hansen with IRR Corporate & Public Finance, who works as a financial advisor for the developer.

“Those are just property taxes and sales taxes directly generated from the Bluhawk project within the STAR bond district. When the star bonds are repaid, that $750,000 will quadruple to $3 million per year at the full project build out.”

The development project pulls from multiple revenue sources, including a transportation development district, which uses 1% of sales tax in the area to fund transportation and infrastructure improvements. According to city documents, under the revised plan the TDD cap will be reduced from $40.1 million to $35 million.

In a since-deleted tweet responding to a question about a potential contract extension for Kansas City Chiefs safety Tyrann Mathieu, Mathieu tweeted that he's "probably not" going to get a new deal in … END_OF_DOCUMENT_TOKEN_TO_BE_REPLACED

KANSAS CITY, Mo. — A manhole left uncovered is the source of concern after a woman damaged her car in Kansas City. The single-car crash happened at 11th Street and Tracy Avenue during the busy … END_OF_DOCUMENT_TOKEN_TO_BE_REPLACED

Kansas City, Missouri's COVID-19 emergency order was set to expire at the end of the month. But Mayor Quinton Lucas made it clear Friday that private businesses can still set their own rules.Any … END_OF_DOCUMENT_TOKEN_TO_BE_REPLACED

KANSAS CITY, MO (KCTV/AP) — All restrictions meant to slow the spread of the coronavirus were being rescinded as of midday Friday in Kansas City, Missouri, following guidance from the U.S. Centers for … END_OF_DOCUMENT_TOKEN_TO_BE_REPLACED