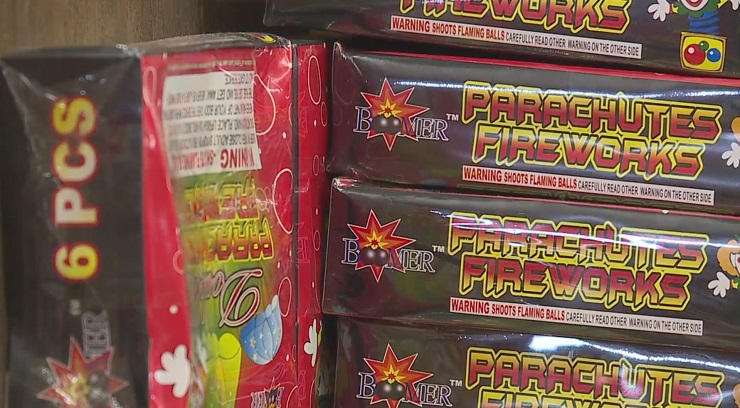 KANSAS CITY, Mo. – We’re a week away from the Fourth of July celebration and vendors are trying to keep up with the high demand.

“Sparklers, some smoke bombs, some things that twizzle up in the air,” Brandon Grant, who went shopping for fireworks said.

It’s a tradition in the Grant house to pop fireworks for July Fourth.

“Every year we come out and get fireworks so the kids can go and pop them,” Grant said.

Grant said he and his family were trying to beat the crowd and stock up before Independence Day.

They shopped at Jake’s Fireworks in Riverside, Missouri where employees said since opening last week the demand is high, but the supply is low.

“A lot of the product isn’t here from China,” Shelley Jerue, Employee at Jake’s Fireworks said. “It’s just sitting in ports in Los Angeles and Long Beach and we’re just trying to get drivers to drive it across here.”

Across state line in Kansas City, Kansas vendors are seeing the impact as well.

They said it’s causing the price of fireworks to go up this year.

“Let’s just pretend it’s 10 bucks, it will be like 15 or 16 this year,” Christian Jones, President of Pat Riots Fireworks said.

Jones said vendors in the state of Kansas could start selling fireworks Sunday, but since his stand is in Wyandotte County, they have to wait until Tuesday.

“It’s going to be really hard just because everyone is low on inventory, to show up on the 4th and expect to have a full selection,” Jones said.

We all are still navigating through the side effects of the pandemic last year, but shoppers like Grant said they are just ready to have a good time.

“It is what it is,” said Grant. “We’re still going to come out and have a good time. That’s what it’s all about.”

Some cities have cancelled their fireworks show this year: https://fox4kc.com/business/blue-springs-announces-return-of-july-4th-fireworks-show-other-cities-cancel-celebrations/

In a since-deleted tweet responding to a question about a potential contract extension for Kansas City Chiefs safety Tyrann Mathieu, Mathieu tweeted that he's "probably not" going to get a new deal in … END_OF_DOCUMENT_TOKEN_TO_BE_REPLACED

KANSAS CITY, Mo. — A manhole left uncovered is the source of concern after a woman damaged her car in Kansas City. The single-car crash happened at 11th Street and Tracy Avenue during the busy … END_OF_DOCUMENT_TOKEN_TO_BE_REPLACED

Kansas City, Missouri's COVID-19 emergency order was set to expire at the end of the month. But Mayor Quinton Lucas made it clear Friday that private businesses can still set their own rules.Any … END_OF_DOCUMENT_TOKEN_TO_BE_REPLACED

KANSAS CITY, MO (KCTV/AP) — All restrictions meant to slow the spread of the coronavirus were being rescinded as of midday Friday in Kansas City, Missouri, following guidance from the U.S. Centers for … END_OF_DOCUMENT_TOKEN_TO_BE_REPLACED