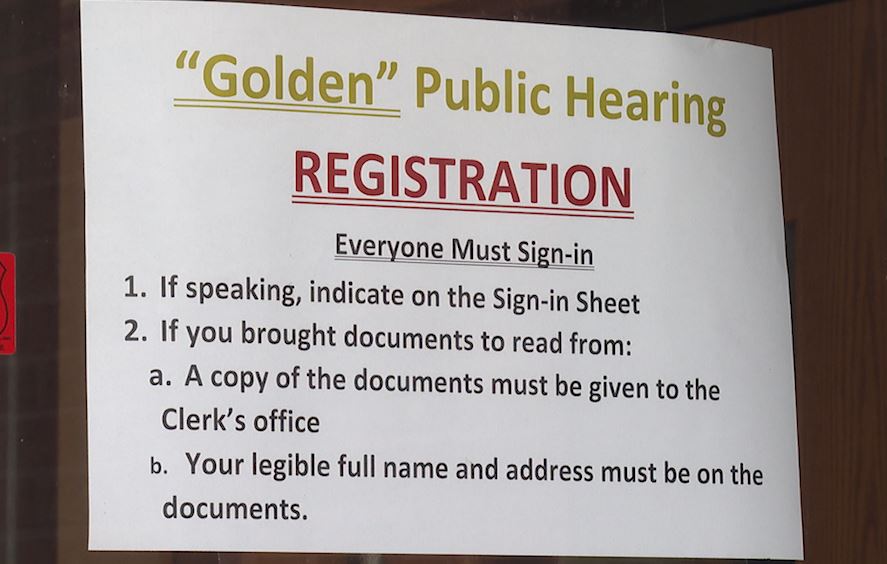 PAOLA, Kan. —The Miami County Board of Commissioners will review a petition to create a new city just south of the Johnson-Miami County Line. Wednesday, commissioners hosted a public hearing and received feedback from roughly 40 residents on the possibility of creating a new third-class city along the northern county border.

Jennifer Williams filed a petition on April 9 with the Miami County clerk to incorporate land in the northern portion of the county in an effort to prevent warehouse development from extending from southern Johnson County into northern Miami County. Over 250 signatures were collected through the petition to establish the City of Golden, Kansas.

If approved, the City of Golden, Kansas, would cover roughly nine square miles of land. City limits would span from the Johnson-Miami county line at 215th Street south to 239th street, and from Cedar Niles Road to the Hillsdale Lake property managed by the Army Corps of Engineers.

“We are not against development. We are against inappropriate warehouse infiltrating our neighborhoods to where we have to leave because no one wants to live by that.where the trucks become dangerous. Where the runoff floods our land. Where our children can’t play outside safely anymore because of all the traffic,” Williams said.

“We are trying to use the law in our favor that’s been used against us to date. If we can exercise our rights under the law so we can seal this up, we can have that representation.”

People in favor of incorporation say establishing a new city with its own government will give residents representation and a local voice when it comes to future developments.

Jerot Pearson is the developer for Hidden Prairie, a subdivision that would be located within the proposed city boundary. He feels incorporation will help protect his business and neighbors from outside interest.

“What’s to the north presents so much risk unless we are afforded some control ourselves,” Pearson said.

Tim Dye lives within the proposed city limits and is in favor of incorporation, but is concerned about the pace of the process.

“This seems like it’s taking forever to get this decision made. My concern is the longer you delay a decision it gives Northpoint and Edgerton more time to annex into Miami County thus making this entire situation null and void,” Dye said.

“If you incorporate Golden, Golden can negotiate with developers that wish to come into their city.  Edgerton cannot negotiate with NorthPoint,” O’Hara said.

“They [NorthPoint] are getting abatements of 100 percent on utility taxes, franchise taxes, excise taxes that all goes into a public infrastructure fund to pay for their development costs. This is ridiculous, it is absolutely ridiculous what is happening. Johnson County has been totally ineffective in protecting the residents there.”

A petition in opposition

The request for incorporation wasn’t met without opposition. Darcy Domoney is an attorney representing more than 100 county taxpayers that signed a petition against the formation of Golden.

Darcy Domoney submitted a pamphlet to the commission outlining concerns residents have about the proposal. He says approximately 111 residents have signed the petition against the formation of a new city.

“My folks that are opposed to this, they’re not for or against necessarily warehouses or commercial development. What they are for is individual property rights. They own real estate. They want those property rights to preserved just like they are today,” Domoney said.

Bach said he is concerned about potential city ordinance restricting current residents’ property rights and an increase in taxes.

“It’s not only a Golden city for today or tomorrow, or next year. It’s a city forever,” Bach said. “You’re telling me that in five years, ten years, or twenty years as things change and evolve and administrations change that taxes aren’t going to be horrendous to operate this city? It’s preposterous.”

Lesley Rigney, district manager for the Miami County Conservation District, said the district won’t be taking a stance on the incorporation of Golden. Rigney came to the meeting Wednesday evening to give information on how development has impacted the Hillsdale watershed.

“With the newest annexation and rezoning, impervious cover is set to reach 20%. The 20% threshold in Bull Creek subwater shed. Which is a nearly 30,000 acre area, the most critical watershed at Hillsdale Lake watershed,” Rigney said.

“These new impairments threaten really all the designated uses of the lake, but immediately and especially the ability of the tributary to support aquatic life and the safety to allow body contact recreation in the lake itself.”

Rigney said the watershed is currently meeting water quality goals, but the total maximum daily load (TMDL) document used by the department was written when the property was an agricultural region and has not been revised since the new development has been constructed.

“We’re not pleading for no development. What we are asking for and encouraging is a natural resources assessment of the impacts of the development and a new current regional and inclusive plan to insure the watershed and the lake itself are not any further adversary impacted by the development,” Rigney said.

Under Kansas law, the commission must unanimously approve the request to incorporate a new city.

No vote was taken Wednesday, but the commission will continue the discussion at a later date. Commissioner Danny Gallagher recused himself from voting on the incorporation of Golden.

Anyone unable to attend the hearing can submit their opinions to the county clerk via email through Wednesday, June 30 at 4:30 p.m. County Commissioner Rob Roberts said supporting documents presented during the public hearing will be made available on the county website.

In a since-deleted tweet responding to a question about a potential contract extension for Kansas City Chiefs safety Tyrann Mathieu, Mathieu tweeted that he's "probably not" going to get a new deal in … END_OF_DOCUMENT_TOKEN_TO_BE_REPLACED

KANSAS CITY, Mo. — A manhole left uncovered is the source of concern after a woman damaged her car in Kansas City. The single-car crash happened at 11th Street and Tracy Avenue during the busy … END_OF_DOCUMENT_TOKEN_TO_BE_REPLACED

Kansas City, Missouri's COVID-19 emergency order was set to expire at the end of the month. But Mayor Quinton Lucas made it clear Friday that private businesses can still set their own rules.Any … END_OF_DOCUMENT_TOKEN_TO_BE_REPLACED

KANSAS CITY, MO (KCTV/AP) — All restrictions meant to slow the spread of the coronavirus were being rescinded as of midday Friday in Kansas City, Missouri, following guidance from the U.S. Centers for … END_OF_DOCUMENT_TOKEN_TO_BE_REPLACED