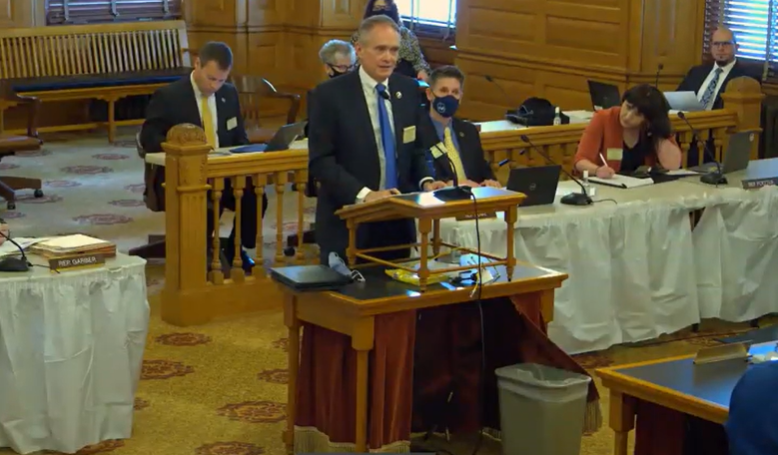 TOPEKA — State Rep. Shannon Francis is an early-to-bed, early-to-rise guy frustrated with the necessity to flip his clock back and forth for daylight saving time and feels Congress should do something to synchronize schedules across the country.

Francis is working to build support in the Kansas House for a resolution — it doesn’t carry force of law, but serves as a recommendation — to bring the United States into harmony by operating on daylight saving time throughout the year. Federal law grants states an opportunity to exclusively adopt standard time, but doesn’t allow permanent daylight saving time. To get Congress to shift course, the southwest Kansas Republican said, a majority of states need to declare a preference and put some heat on representatives in Washington, D.C.

He said Kansas’ answer should be House Resolution 5008, which would ditch the switch in favor of daylight saving time 24/7.

“It is a great signal to our federal delegation that they should get on board of a federal solution that allows us to lock the clock,” Francis said.

In the United States, daylight saving time starts the second Sunday in March. It ends the first Sunday in November. Put more simply, folks “spring” forward in March by setting clocks ahead one hour. Everyone must “fall” back by dialing clocks back one hour in November.

On the other hand

Jay Pea, with the nonprofit organization Save Standard Time in San Francisco, said the resolution offered by Francis was a mistake. Congress needs to act, he said, but the country should lock in standard time rather than daylight saving time. The only states not observing daylight saving time are Arizona and Hawaii, and those state legislatures took the plunge in the 1960s.

He said polling indicated the public was weary of all the time switches and surveys revealed a slight preference for selection of standard time.

Scott Yates, a Denver resident considered a central figure in the lock-the-clock movement, said that when he got involved seven years ago he was among a few other sleep-deprived people complaining on the internet about daylight saving time.

This year, however, there is evidence of more politicians keen to deal with leaping back and forth in time.

“Now, we have 15 states who have passed something to fix the barbarism of DST clock changing, and the dozens of bills introduced this year are flying through committees. In previous years a couple of legislators reached out to me, and the general feeling was that nobody wanted to go first,” Yates said.

Yates said that if Kansans really wanted to opt for permanent standard time the state’s residents would have made themselves heard by now.

“The science is decidedly mixed. Some sleep researchers say that permanent standard time is better for sleep while others disagree,” Yates said. “Other research in the fields of adolescent exercise, mental health, traffic safety, crime and workplace productivity say that permanent DST would be better.

“The one thing they all agree on, and why this resolution is such a good idea, is that it helps with what all science agrees on, that the twice yearly clock changes — especially the one in the spring — are deadly. The research on that is unassailable,” he said.

Jim Reed, a director of environment, energy and transportation policy at the National Council of State Legislatures, said the pace of activity about permanently settling on daylight saving or standard time had picked up. Since 2015, he said, at least 350 bills and resolutions had been introduced in statehouses. None of significance passed until 2018 when Florida adopted a legislation to permanently observe daylight saving time once permitted by federal law.

Rep. Kristey Williams, an Augusta Republican in the Kansas House, said she supported Francis’ resolution because the idea of moving from standard to daylight saving time was wrapped in well-meaning attempts to consider the nation’s safety and energy needs. Those issues, which date to World War I, are no longer relevant, she said.

“I’m a supporter of the movement that says ‘ditch the switch’ or ‘lock the clock.’ Let’s remove antiquated and harmful policies whenever given the opportunity,” she said.

The post Clock is ticking: Ditch the switch for year-round standard or daylight saving time? appeared first on Kansas Reflector.

In a since-deleted tweet responding to a question about a potential contract extension for Kansas City Chiefs safety Tyrann Mathieu, Mathieu tweeted that he's "probably not" going to get a new deal in … END_OF_DOCUMENT_TOKEN_TO_BE_REPLACED

KANSAS CITY, Mo. — A manhole left uncovered is the source of concern after a woman damaged her car in Kansas City. The single-car crash happened at 11th Street and Tracy Avenue during the busy … END_OF_DOCUMENT_TOKEN_TO_BE_REPLACED

Kansas City, Missouri's COVID-19 emergency order was set to expire at the end of the month. But Mayor Quinton Lucas made it clear Friday that private businesses can still set their own rules.Any … END_OF_DOCUMENT_TOKEN_TO_BE_REPLACED

KANSAS CITY, MO (KCTV/AP) — All restrictions meant to slow the spread of the coronavirus were being rescinded as of midday Friday in Kansas City, Missouri, following guidance from the U.S. Centers for … END_OF_DOCUMENT_TOKEN_TO_BE_REPLACED