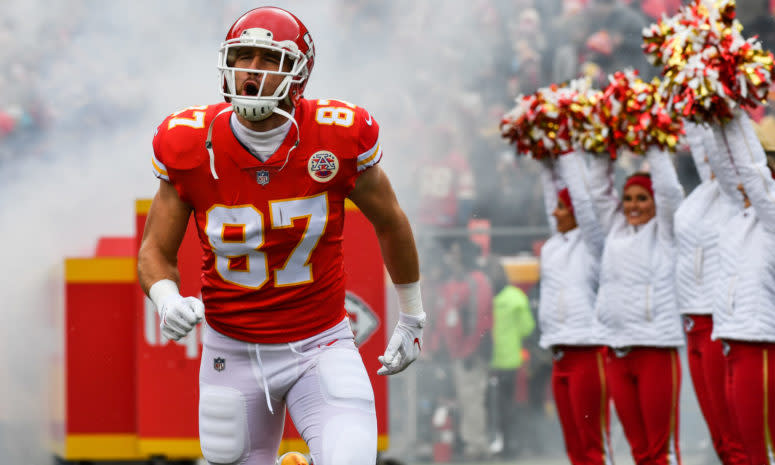 On Friday, the latest betting odds had the New England Patriots as the favorites to land Jones. He would immediately help out their passing attack, regardless if Mac Jones or Cam Newton is starting at quarterback.

The Kansas City Chiefs have also been mentioned as a potential suitor for Jones, but they might not be a true contender for the All-Pro wideout due to financial reasons.

Chiefs tight end Travis Kelce, however, isn’t afraid to admit that he’s eager to see where Jones ends up this offseason. During an appearance on ESPN’s NFL Live, Kelce called Jones a “game-changer.”

“I’ll tell you what, I’m intrigued,” Kelce said. “My eyes are open. I’m peeking at the headlines seeing where it goes. Listen, that’s a game-changer. When you talk about guys that can make plays anywhere on the field, full route tree no matter where you put him. I mean that’s a guy that changes the game and changes teams, so I’m interested to see where he lands.”

It would be fun to see Jones lining up with Kelce, Tyreek Hill, Mecole Hardman and Demarcus Robinson in Kansas City.

Although the Chiefs don’t really need more wide receivers, it never hurts to give Patrick Mahomes a few more weapons. Besides, the Chiefs would give Jones the best chance to win a Super Bowl.

The post Chiefs Star Reacts To The Julio Jones Trade Rumors appeared first on The Spun.

In a since-deleted tweet responding to a question about a potential contract extension for Kansas City Chiefs safety Tyrann Mathieu, Mathieu tweeted that he's "probably not" going to get a new deal in … END_OF_DOCUMENT_TOKEN_TO_BE_REPLACED

KANSAS CITY, Mo. — A manhole left uncovered is the source of concern after a woman damaged her car in Kansas City. The single-car crash happened at 11th Street and Tracy Avenue during the busy … END_OF_DOCUMENT_TOKEN_TO_BE_REPLACED

Kansas City, Missouri's COVID-19 emergency order was set to expire at the end of the month. But Mayor Quinton Lucas made it clear Friday that private businesses can still set their own rules.Any … END_OF_DOCUMENT_TOKEN_TO_BE_REPLACED

KANSAS CITY, MO (KCTV/AP) — All restrictions meant to slow the spread of the coronavirus were being rescinded as of midday Friday in Kansas City, Missouri, following guidance from the U.S. Centers for … END_OF_DOCUMENT_TOKEN_TO_BE_REPLACED