Hy-Vee Inc. is turning one of its Kansas City grocery stores into a Wall to Wall Wine and Spirits, a new division that launched earlier this year.

The store at 207 NE Englewood Road will close at 6 p.m. on Jan. 1 and reopen in the coming months with the new format. Englewood employees will be offered positions at other area Hy-Vee locations, according to a release. The onsite Hy-Vee Fast & Fresh convenience store will continue operating.

Wall to Wall Wine and Spirits offers a variety of price points across a wide selection of wine, spirits and craft beer. The store also features specialty grocery items, such as cheese, seltzers and charcuterie, as well as high-end barware and related accessories.

Two stores have opened, one in West Des Moines and the other in Papillion, Nebraska. Other planned locations include Omaha and Lincoln. 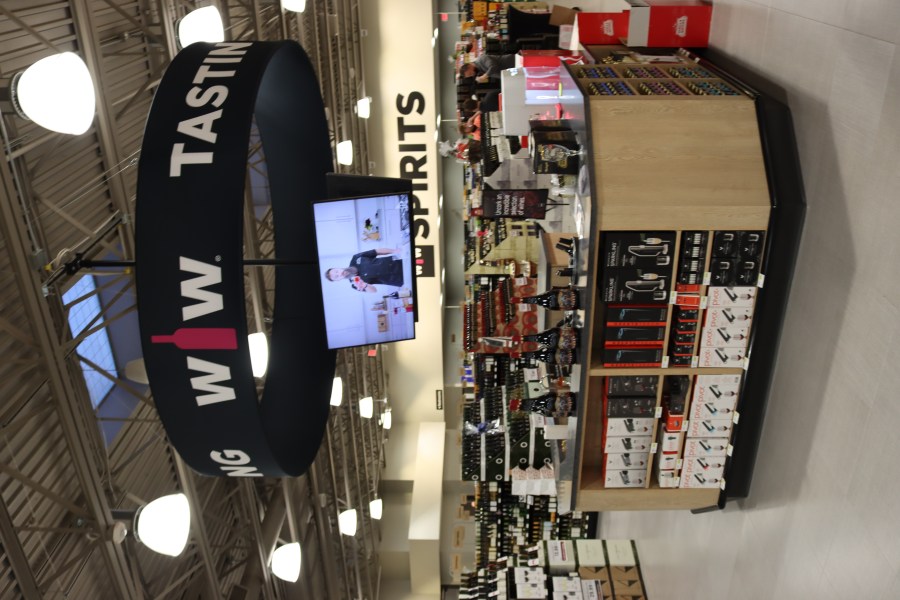 In foreground is new performing arts center; Bartle Hall is to left, Sprint Center is tto right, and Missouri River can be seen in background.

The quality of life Americans can achieve on a $100,000 salary hinges on the cost of living in their chosen state and city.

According to the personal finance website, Kansas Citians making $100,000 would have leftover income equal to about the national average. But it’s less than those living in Dallas; Oklahoma City; Tulsa, Oklahoma; and Wichita.

With Monday’s opening, the fast-growing concept that specializes in traditional Hawaiian plates now counts nine locations in the Kansas City area and a tenth in nearby Lawrence on its plate — with more to come. Its other locations are in Illinois (2) and Texas (12).

According to its website, a new restaurant will be arriving soon to 800 NE Coronado Dr. in Blue Springs, formerly a Kneaders Bakery & Cafe location.

That’s one mile away from a new-to-town competitor: Mo’ Bettahs Hawaiian Style Food. The website for the Bountiful, Utah-based chain, which plans to open four locations in the Kansas City area next year, now lists 26 open restaurants.

“It puts CBL in a much stronger position financially. … It gives us the financial flexibility we need to execute on our strategy moving forward,” Stacey Keating, CBL’s vice president of corporate communications, told the Kansas City Business Journal.

That strategy includes diversifying properties by finding new uses for underperforming anchor spaces, she said. Former Sears spaces, for example, are being filled with tenants such as Scheels All Sports, Main Event and a grocery store. At one mall, CBL opened a Hollywood Casino and is adding a Life Storage. Keating said CBL also is looking at uses such as hotels and education.

Oak Park Mall anchor tenant Nordstrom plans to relocate to the Country Club Plaza in 2023, and CBL’s development team is mulling a variety of ideas, said Karla Rocker Engel, the mall’s senior general manager. Nothing is set in stone, however, and she declined to discuss potential options.

Prime Social Rooftop has opened on the 16th floor of 46 Penn Centre on the Country Club Plaza.

The upscale cocktail bar is the first of two concepts by Ohio-based Cameron Mitchell Restaurants that are opening in the building at 4622 Pennsylvania Ave.

“We have a wonderful view of the whole Plaza,” said Alex Carsonie, sales and event manager at Prime Social Rooftop. “We’re just very lucky to be up here.”

“All of our food is designed for sharing in mind,” Carsonie said. “So we have small bites, sushi and small pizzas, and a Kansas City strip that can be sliced and shared by the table.”

The development team behind a $200 million reinvention of a long-derelict corner in Kansas City’s Citadel neighborhood is making aggressive strides toward breaking ground on the first components of a proposed “live-work-play” community.

Representatives for Miami-based UrbanAmerica have presented new concepts for its SouthPointe at 63rd Street development — on largely vacant land northwest of 63rd Street and Prospect Avenue, just north of Research Medical Center — and fielded questions from residents living nearby since receiving the City Council’s approval of a general development plan in August.

UrbanAmerica’s plan follows city redevelopment attempts dating to 1994, when tax increment financing incentives became available. Multiple blight studies have been conducted in years past, and at least three previous projects have been pitched — most notably Citadel Plaza, whose developers sued Kansas City for allegedly failing to issue an approved cash advance for the project and later pleaded guilty to improper removal of on-site asbestos.

“We’re very excited to be in the Kansas City market,” Robert Farmer, senior vice president with UrbanAmerica, said during a Nov. 8 neighborhood meeting. “We come into these communities as guests, and we’re very sensitive to the community, what they want to see, what they want to support and how it is that we can help make the dreams of communities such as this one into a reality.”

Central to the project’s first phase is a 250-unit workforce housing community with a mix of one- and two-bedroom residences, to be co-developed by UrbanAmerica and Gateway Properties LLC, an affiliate of Jersey City-based Gateway Merchant Banking.

The complex will comply with Kansas City’s affordable housing ordinance, with 25 apartments reserved apiece for tenants earning up to 70% and 30% of the city’s median family income (MFI).

A boom in travelers eager to get away is expected to push Kansas City International Airport’s international flight numbers closer to its pre-pandemic levels.

With the addition of Southwest’s nonstop flights to Cancun, the airport’s international arrivals area, which is located in Terminal C, will begin to hum again as American and Frontier also resume their seasonal service to the popular Mexican destination.

According to data from the Kansas City Aviation Department, the three airlines are scheduled to offer 108 flights with more than 21,000 seats from November to April.

Leading up to the pandemic, there were 59 flights with nearly 11,000 seats from December 2019 to March 2020. There were no nonstop flights to Cancun offered in November 2019, and the COVID-19 outbreak completely halted international travel out of KCI in April 2020.

Co-owners Eric and Tracy Martens acquired the 6,438 square-foot, two story building in 2020. The brewery occupies about 3,200 square feet on the ground floor. It’s one block east of the brewery’s former 1,200 square-foot location at 406 E. 18th Street.

“We’ve been looking for opportunities to grow for a few years and this property came up,” said Eric Martens. “It was just a good size for us to grow to the next level and a great location, right in the heart of the Crossroads. Probably my No. 1 priority was to stay in the East Crossroads, because it’s developed into such a great neighborhood.”

“We actually sold them our old equipment, which was really just a great situation for everybody involved,” Martens said. “We didn’t have to mess with moving our equipment out of the old space. They were able to step into an operating brewery, basically a turnkey operation. They’re great guys. We’ve gotten to know them over the last few months, and it seems like they’re doing pretty well.”

See what’s on tap in the Kansas City Business Journal

Lidia’s Kansas City has expanded its restaurant, creating an outdoor pergola space that can accommodate as many as 150 guests.

After navigating the pandemic, Lidia’s founder and co-owner Lidia Bastianich views it as an opportunity to “come back stronger and with more enthusiasm and with more revenue potential,” she told the Kansas City Business Journal.

The pergola space can be used for special events, such as weddings and cocktail parties, which can boost the bottom line, she said. It allows guests to spread out and is designed for hot or cold weather. Eventually, it will include all-weather curtains to enclose the area if desired.

Bastianich, who visited Kansas City for the ribbon cutting and to promote her new cookbook, “Lidia’s A Pot, A Pan, And A Bowl,” talked to KCBJ about the restaurant industry, including supply chain issues and what the future holds.

“I think the future is bright,” she said. “Restaurants have been there forever. They’re places to restore oneself. Mainly now, they’re a place to socially gather, to connect. … With the social media and being isolated by this little phone that we all have, getting out and sitting at the table and discussing and sharing, whether it’s with family or friends, I think it’s become ever more necessary in our lives. So I think that restaurants are here to continue to grow.”

This season, there will be more nonstop service from Kansas City to Cancun than before the pandemic, according to data from the Kansas City Aviation Department.

But the airport’s international service could get even busier with the return of Air Canada. The Montreal-based airline hasn’t flown into Kansas City since March 2020.

Data from the Aviation Department shows Air Canada plans to resume its nonstop flights to Toronto in May. The airline is scheduled to make 30 nonstop flights to the Great White North that month. That’s the same level of service — 1,550 seats — as before the pandemic.

The combination of regular Toronto flights as well as increased seasonal Cancun flights could push the airport’s total international numbers closer to the highs it achieved in 2019 when Icelandair still was operating out of KCI.

In a since-deleted tweet responding to a question about a potential contract extension for Kansas City Chiefs safety Tyrann Mathieu, Mathieu tweeted that he's "probably not" going to get a new deal in … END_OF_DOCUMENT_TOKEN_TO_BE_REPLACED

KANSAS CITY, Mo. — A manhole left uncovered is the source of concern after a woman damaged her car in Kansas City. The single-car crash happened at 11th Street and Tracy Avenue during the busy … END_OF_DOCUMENT_TOKEN_TO_BE_REPLACED

Kansas City, Missouri's COVID-19 emergency order was set to expire at the end of the month. But Mayor Quinton Lucas made it clear Friday that private businesses can still set their own rules.Any … END_OF_DOCUMENT_TOKEN_TO_BE_REPLACED

KANSAS CITY, MO (KCTV/AP) — All restrictions meant to slow the spread of the coronavirus were being rescinded as of midday Friday in Kansas City, Missouri, following guidance from the U.S. Centers for … END_OF_DOCUMENT_TOKEN_TO_BE_REPLACED