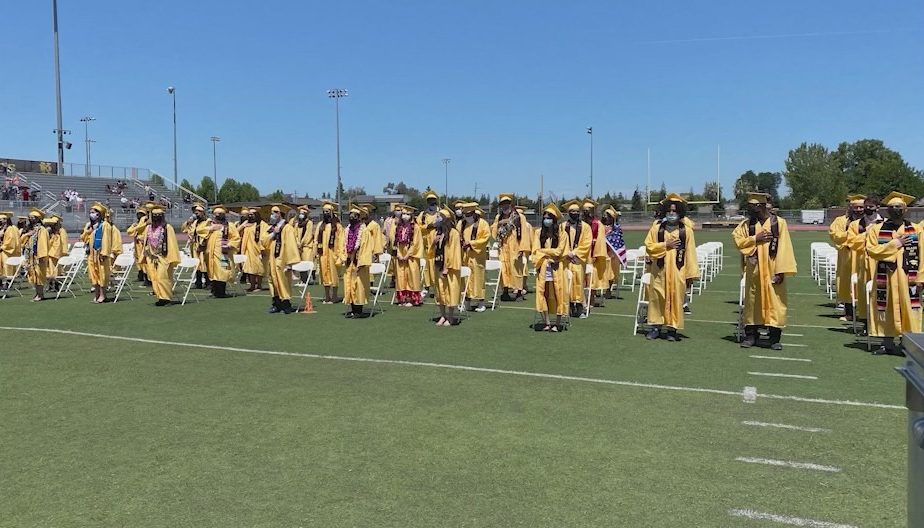 STOCKTON, Calif. — A graduation speech resulted in a high school principal being escorted off campus in Stockton, California.

Although the class of 2021 was able to receive an in-person ceremony during a global pandemic, the event did not commence without controversy.

The speech was delivered at Stagg High School on Thursday morning, and some attendees say there was nothing wrong with the content. But others claim the principal made the event about himself.

Despite families’ pleas, Belton seniors disappointed to miss graduation due to quarantine

“Today was about celebrating the students,” Meza explained. “Unfortunately, Mr. Nakamura chose to use this platform for his own grievances. He was escorted to his car, and he did turn in his keys.”

In a video circulating on social media, Nakamura tells the graduates to study hard and do their best.

He also touched on his personal experience of losing his mother to a heroin overdose, violence in neighborhoods, race and helping the next generation.

“He said such things as, ‘Successful people only get that way by stomping on each other,’” Meza said. “We got numerous calls from parents complaining saying that the principal was using the graduation as a platform to share his own grievances.”

District officials asked Nakamura not to attend the noon and 3 p.m. ceremonies.

Sofia Colón, who has children attending school in the district, told FOX40 that Nakamura is loved by his students.

She said she can’t believe what happened.

“Anger, shock, sadness,” Colón said. “That speech tells me how honest this principal is with his students. Tell the students, be a mentor to your little brothers and sisters. He told us where he came from, how relatable, how vulnerable. That was my takeaway: Don’t be a sellout, tell the truth.”

In the speech, Nakamura said he would not return to the high school because the school’s board of trustees voted to remove him. No reason was given for his removal.

FOX40 tried to get in touch with Nakamura, who would only say that he was laid off and tried to reapply for the job but the board did not approve to bring him back.

In a since-deleted tweet responding to a question about a potential contract extension for Kansas City Chiefs safety Tyrann Mathieu, Mathieu tweeted that he's "probably not" going to get a new deal in … END_OF_DOCUMENT_TOKEN_TO_BE_REPLACED

KANSAS CITY, Mo. — A manhole left uncovered is the source of concern after a woman damaged her car in Kansas City. The single-car crash happened at 11th Street and Tracy Avenue during the busy … END_OF_DOCUMENT_TOKEN_TO_BE_REPLACED

Kansas City, Missouri's COVID-19 emergency order was set to expire at the end of the month. But Mayor Quinton Lucas made it clear Friday that private businesses can still set their own rules.Any … END_OF_DOCUMENT_TOKEN_TO_BE_REPLACED

KANSAS CITY, MO (KCTV/AP) — All restrictions meant to slow the spread of the coronavirus were being rescinded as of midday Friday in Kansas City, Missouri, following guidance from the U.S. Centers for … END_OF_DOCUMENT_TOKEN_TO_BE_REPLACED