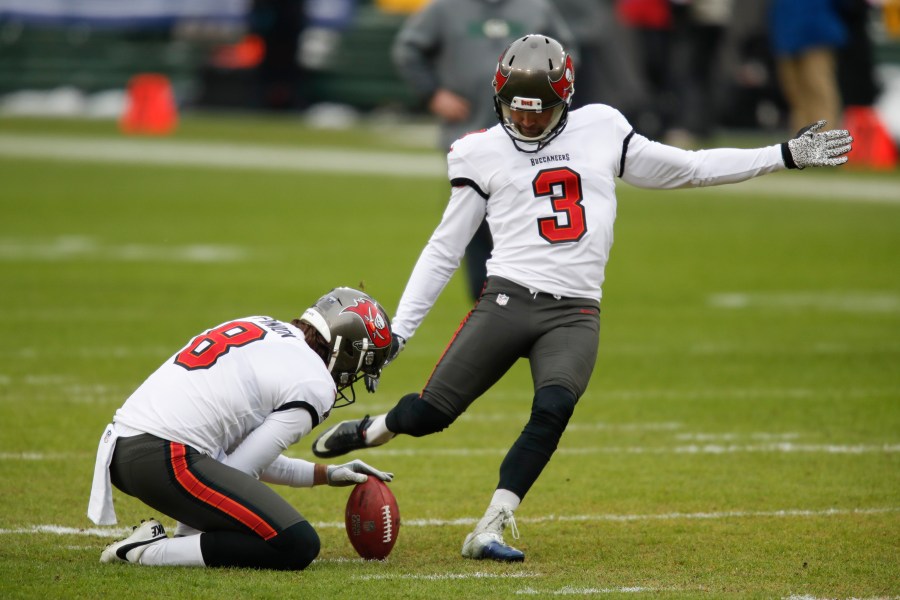 And it’s been quite a trip.

Cut by not one but two teams. A role in one of the NFL’s worst seasons kicking a football in a couple decades, and an injury that left him working out for months in 2020 waiting for a team to call.

Now Succop finds himself with his third team preparing for his first Super Bowl on Sunday ironically against the team that drafted him — the Kansas City Chiefs.

A year ago, Succop had just finished the most bizarre year of his career.

He expected to be ready for the 2019 season after offseason surgery on his right, kicking leg. He started the season on injured reserve with the Tennessee Titans after testing his leg in a pair of preseason games. Once activated, he made only 1 of 6 field goal attempts (16.7%) in six games before going back on injured reserve.

It was a stunning performance for a kicker who made a franchise-best 86.6% of field goals over his previous five seasons in Tennessee. Succop set an NFL record making 56 straight field goals inside 50 yards between 2014 and 2017.

“When I was going through it, it was so frustrating and it was difficult,” Succop said. “And it’s just not at all what you want as an athlete, ever. But when you look back on it, I think about that time of my life and I think that it has brought me a ton as a person. I think that it has grown me in my faith and it’s grown me as a man.”

The Titans released Succop in March just as the coronavirus pandemic closed gyms. Luckily, Succop had a workout partner a couple houses down in Nashville in Atlanta tight end Luke Stocker, a former Titans teammate, with his own gym in his garage.

From players to pedigree, Chiefs edge on Bucs in all aspects

First, their wives would work out together while Succop and Stocker watched the children. Then they would swap out with the wives taking over child care duties.

“Getting to train with Luke was something that was a blessing,” Succop said. “He was just great. We kind of fed off each other.”

Not being with a team also gave Succop time to fully heal despite the uncertainty over his future. Succop didn’t have to rush to kick in May or June, instead continuing his training.

“The time away was good,” Succop said. “And then have the opportunity to come down here right before the season started was awesome.”

Finding a kicker had been Tampa Bay’s shaky spot for years. Before signing Succop on Sept. 1, the Bucs had gone through eight different kickers since 2015, including drafting Matt Gay in 2019 out of Utah in the fifth round. Succop’s predecessors converted only 73.7% of field goals in that span.

Tampa Bay special teams coordinator Keith Armstrong called Succop a true professional and a pleasure to be around.

“You can’t ask for more,” Armstrong said. “He’s committed, he’s a true pro, he brings all the other guys along with him and it’s not with his mouth – it’s by demonstration. He’s a true leader and he’s a serious guy. (He) takes his profession very seriously; he’s a pleasure because he’s the same guy every day.”

Chiefs’ Kpassagnon driven to succeed on, off football field

Succop, who still has a house in Kansas City, can earn a Super Bowl ring at the expense of the Chiefs.

Dave Toub was Chiefs special teams coordinator in Succop’s final two seasons. Toub noted Succop helped beat the Chiefs with a big kick in the playoffs before, a wild-card game on Jan. 6, 2018, in Kansas City. Succop’s extra point was the difference in the Titans’ 22-21 win.

“He’s a great guy. He works hard at his craft …,” Toub said. “But yeah I’m really happy that he’s had the year that he had, and it’s going to be really good to see him again Sunday and going against him is really fun.”

Succop hopes to have the last laugh.

“It should be a great game,” Succop said.

In a since-deleted tweet responding to a question about a potential contract extension for Kansas City Chiefs safety Tyrann Mathieu, Mathieu tweeted that he's "probably not" going to get a new deal in … END_OF_DOCUMENT_TOKEN_TO_BE_REPLACED

KANSAS CITY, Mo. — A manhole left uncovered is the source of concern after a woman damaged her car in Kansas City. The single-car crash happened at 11th Street and Tracy Avenue during the busy … END_OF_DOCUMENT_TOKEN_TO_BE_REPLACED

Kansas City, Missouri's COVID-19 emergency order was set to expire at the end of the month. But Mayor Quinton Lucas made it clear Friday that private businesses can still set their own rules.Any … END_OF_DOCUMENT_TOKEN_TO_BE_REPLACED

KANSAS CITY, MO (KCTV/AP) — All restrictions meant to slow the spread of the coronavirus were being rescinded as of midday Friday in Kansas City, Missouri, following guidance from the U.S. Centers for … END_OF_DOCUMENT_TOKEN_TO_BE_REPLACED