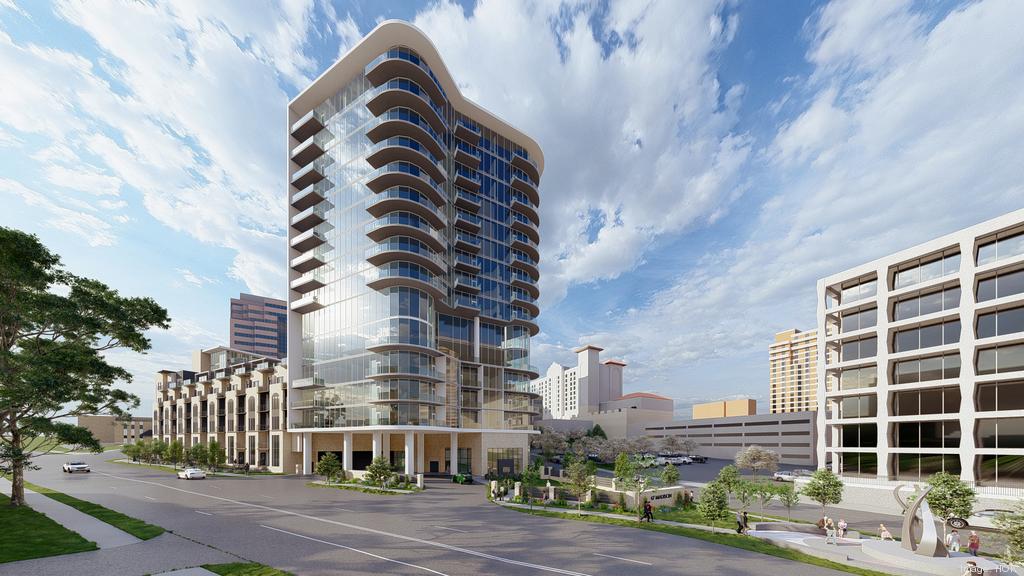 With a new office tower in the books, Block Real Estate Services LLC has shifted its attention to its next skyline-shaping Plaza development — a familiar proposal now with a handful of tweaks.

The Kansas City developer has amended its plans for The Madison, a luxury apartment tower on a triangular trophy site south of 46th Street, between Roanoke Parkway and Madison Avenue. It now proposes fewer units and would be a taller building.

Originally introduced as 47Madison, Block’s project in January 2017 received city approval with 245 residences as part of a 13-story tower. Later that year, officials greenlit a jump to 288 apartments across 15 stories.

Now, Block envisions 238 units in a project that, at The Madison’s south end, reaches its tallest point at 16 stories, or 223 feet, up from around 200 feet in its previous version. The individual units average 1,063 square feet, though specific rent levels are not yet decided.

The revisions correspond with an increase in individual floor heights to accommodate HVAC systems and other utilities, though without a larger number of residential floors, Aaron Mesmer, Block’s senior vice president of development and acquisitions, said Thursday.

In a since-deleted tweet responding to a question about a potential contract extension for Kansas City Chiefs safety Tyrann Mathieu, Mathieu tweeted that he's "probably not" going to get a new deal in … END_OF_DOCUMENT_TOKEN_TO_BE_REPLACED

KANSAS CITY, Mo. — A manhole left uncovered is the source of concern after a woman damaged her car in Kansas City. The single-car crash happened at 11th Street and Tracy Avenue during the busy … END_OF_DOCUMENT_TOKEN_TO_BE_REPLACED

Kansas City, Missouri's COVID-19 emergency order was set to expire at the end of the month. But Mayor Quinton Lucas made it clear Friday that private businesses can still set their own rules.Any … END_OF_DOCUMENT_TOKEN_TO_BE_REPLACED

KANSAS CITY, MO (KCTV/AP) — All restrictions meant to slow the spread of the coronavirus were being rescinded as of midday Friday in Kansas City, Missouri, following guidance from the U.S. Centers for … END_OF_DOCUMENT_TOKEN_TO_BE_REPLACED