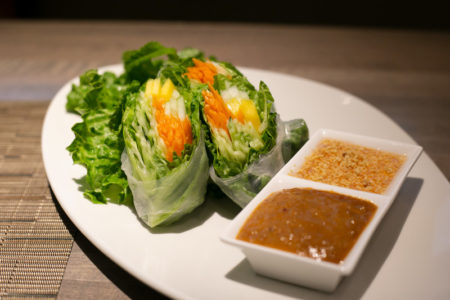 The owners of KC Thai in Overland Park have opened another restaurant in Johnson County. Bamboo Penny’s debuted earlier this month in Leawood.

“Unlike the other Thai restaurants that we have locally, this one, she calls it her ‘steakhouse of Thai restaurants,’” Doug said, referring to Penny. “She’s trying to go a little more elevated.”

In January, the couple opened KC Thai at 135th and Quivira, then began turning their focus on this new upscale concept. They celebrated the grand opening of Bamboo Penny’s on Friday, June 11.

“So happy — actually we’ve been waiting for eight or nine months because of the pandemic,” Penny said. “I’m so excited we’re going to be open in this place. This is one of my dreams.”

Designed by Penny Mufuka, the menu fuses Thai tastes with Western techniques. Above, moo yang is a grilled pork dish featured on the happy hour menu.

Designed entirely by Penny herself, the dishes on the menu pay homage to the tropical notes seen in Thai cuisine — think pineapple fried rice, which is served inside a freshly split open pineapple.

Some of the dishes are the Mufukas’ take on street food, often marrying traditional Thai flavors with Western flair.

For example, the drunken Thai barbecue ribs fuse Kansas City’s love for barbecue by bringing grilled pork marinated in a red wine reduction in combination with a sweet Thai sauce that almost tastes like barbecue.

“Real, original Thai food, I don’t think you guys can handle it,” Penny said, laughing. “It is true. Too spicy, too strong, too fishy, you know? But when you cook with it, it tastes good. So that’s why we halve it — halve with you guys, halve with us.”

Dishes can be customized upon request. The Mufukas say many of their dishes are inspired by the tastes in Penny’s hometown of Phetchabun in central Thailand.

Penny Mufuka said opening an upscale restaurant has been one of her lifelong dreams. Above, the fresh salad rolls with peanut sauce are a popular appetizer on the menu.

Penny said many ingredients in her dishes are inspired by the wares that merchants sell in the open-air markets of her hometown.

Bamboo Penny’s is only open for dinner for now.

Meanwhile, customers will see the dining room interior designed by Penny, including the wallpaper imported from Thailand that commemorates the Thai New Year in April.

A full bar program features tropical cocktails, vodka infused with various fruits and beers from local breweries. The craft drinks are designed to pair with dishes on the menu.

The lounge upstairs will open in a few weeks (hopefully by Independence Day, the couple says), with a terrace overlooking the outdoor seating and shared lawn below, and an open-air rooftop area.

“Basically, I’m happy with the way the whole thing looks,” said Penny, noting that she’s particularly excited about the shared patio where the community can gather and enjoy each other’s company with live entertainment, yard games and outdoor movie showings.

Penny Mufuka has been in the restaurant industry since she immigrated to the United States several years ago. The couple opened their first local restaurant Thai House at 99th and Holmes in Kansas City, Mo. They also own a small street taco shop.

“Love — it has to come from love,” Penny said. “I love doing what I’m doing. When customers say, ‘Oh, you have the best food,’ that makes me so happy. That’s how my food comes out, it tastes good: I tell them I move to the left, move to the right, check and done.”

In a since-deleted tweet responding to a question about a potential contract extension for Kansas City Chiefs safety Tyrann Mathieu, Mathieu tweeted that he's "probably not" going to get a new deal in … END_OF_DOCUMENT_TOKEN_TO_BE_REPLACED

KANSAS CITY, Mo. — A manhole left uncovered is the source of concern after a woman damaged her car in Kansas City. The single-car crash happened at 11th Street and Tracy Avenue during the busy … END_OF_DOCUMENT_TOKEN_TO_BE_REPLACED

Kansas City, Missouri's COVID-19 emergency order was set to expire at the end of the month. But Mayor Quinton Lucas made it clear Friday that private businesses can still set their own rules.Any … END_OF_DOCUMENT_TOKEN_TO_BE_REPLACED

KANSAS CITY, MO (KCTV/AP) — All restrictions meant to slow the spread of the coronavirus were being rescinded as of midday Friday in Kansas City, Missouri, following guidance from the U.S. Centers for … END_OF_DOCUMENT_TOKEN_TO_BE_REPLACED