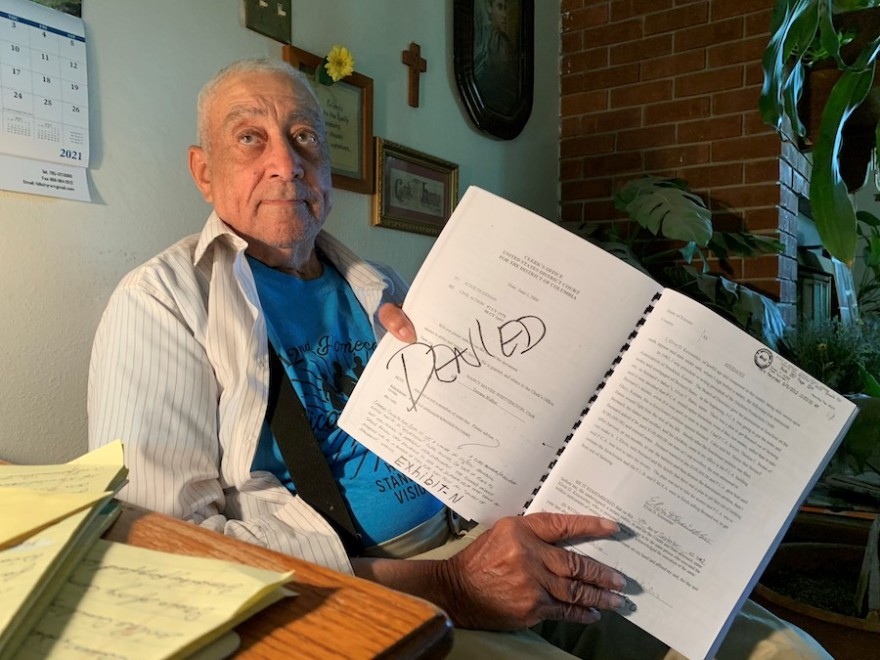 Bernard Bates holds a notebook of documents from the lawsuits he’s been a part of while trying to get his farmland back. (David Condos/Kansas News Service)

Through coverage of reparations, sexual identity and even public pools, three public radio segments this week document how Black folks are advocating for change and encountering significant obstacles. All three audio stories here use agile writing and interviewing to combine stories of race with other issues. If you listen to all three, you’ll get a heartland portrait of Black resilience.

Before we jump into those, here’s my strong recommendation of the political discussion on the Kansas Reflector Podcast this week among three statewide experts: the Reflector’s Tim Carpenter, Bob Beatty of Washburn University and Michael Smith of Emporia State University. The 31-minute chat is the most clear and insightful political overview of recent Kansas politics that I have heard.

Reporting for High Plains Public Radio, David Condos provides the personal stories and the shocking economic figures behind the decades of loans denied to Black farmers in Kansas and elsewhere. A $4 billion federal program to compensate Black farmers who were denied loans might seem like progress. But Condos reports that experts put the actual financial damage of the discriminatory lending at $300 billion. And most cruel, it seems unlikely that the payments will be made soon — if ever — due to bureaucratic hold ups and lawsuits.

The question of how to compensate Black Americans for the damage done by government-sponsored racism quickly gets bogged down into logistical quicksand: “How could we ever pay enough? How would Black Americans legitimize their Black-ness?”

What this story reveals is even more sclerotic: how our federal government has approved payments but still can’t get the money to those who have been granted the funds.

This excellent installment from Gina Kaufmann tells the story of summer pools on the Kansas side of the state line in Kansas City — which seems like a topic that is simple enough. And that kind of sunny story is what I assumed she was working on when I saw her crowd-sourcing tweet earlier in the week. But as we should expect from “Real Humans,” the story here is more complicated.

Courtney Richardson, a teacher, tells the story of her student who drowned after climbing the fence at a Kansas City, Kansas, public pool that was closed, yet filled with water. In the story, Richardson, who is also a mother, voices her community’s need to have a public pool open, rather than just sitting idle, yet full of water.

Kaufmann again shows her talent for compact and nuanced storytelling in this episode. Most of all, her story shines with compassion, such as when she writes, “If pools seem like a luxury, that means you’ve probably never had to fight for one.” And near the end of the story, Richardson delivers a quote that could serve as the thesis for Kaufman’s “Real Humans” episodes: “We are people. We are all people.”

Serving the Greater Kansas City area — but based across the state line in Missouri — BlaqOut KC is working to support black MSM, or men seeking men. Brian Ellison hosts the discussion with BlaqOut KC founder D. Rashaan Gilmore and explains the group’s focus: the eradication of HIV/AIDS within the Kansas City community of gay and queer men. Ellison reports that 1 in 2 black men will contract HIV, a statistic that finds lots of thoughtful context in the interview.

Just like the two podcasts above, Gilmore explains the intersection of race with a second issue — in this case, keeping a community healthy: “A lot of the issues that we encounter are exacerbated by issues that are present in the broader society, whether that’s issues around racial discrimination, HIV/AIDS stigma or issues relative to sexual identity. For us it’s imperative that we find and carve out for ourselves a space not just in the physical terms but also in the broader social and cultural context.”

Gilmore also touts the partnerships his group has made with many established community groups, including the UMKC School of Medicine’s broad survey of the metropolitan area’s men seeking men.

What did we miss? Email [email protected] to let us know of a Kansas-based audio program that would be interesting to Audio Astra readers.

In a since-deleted tweet responding to a question about a potential contract extension for Kansas City Chiefs safety Tyrann Mathieu, Mathieu tweeted that he's "probably not" going to get a new deal in … END_OF_DOCUMENT_TOKEN_TO_BE_REPLACED

KANSAS CITY, Mo. — A manhole left uncovered is the source of concern after a woman damaged her car in Kansas City. The single-car crash happened at 11th Street and Tracy Avenue during the busy … END_OF_DOCUMENT_TOKEN_TO_BE_REPLACED

Kansas City, Missouri's COVID-19 emergency order was set to expire at the end of the month. But Mayor Quinton Lucas made it clear Friday that private businesses can still set their own rules.Any … END_OF_DOCUMENT_TOKEN_TO_BE_REPLACED

KANSAS CITY, MO (KCTV/AP) — All restrictions meant to slow the spread of the coronavirus were being rescinded as of midday Friday in Kansas City, Missouri, following guidance from the U.S. Centers for … END_OF_DOCUMENT_TOKEN_TO_BE_REPLACED