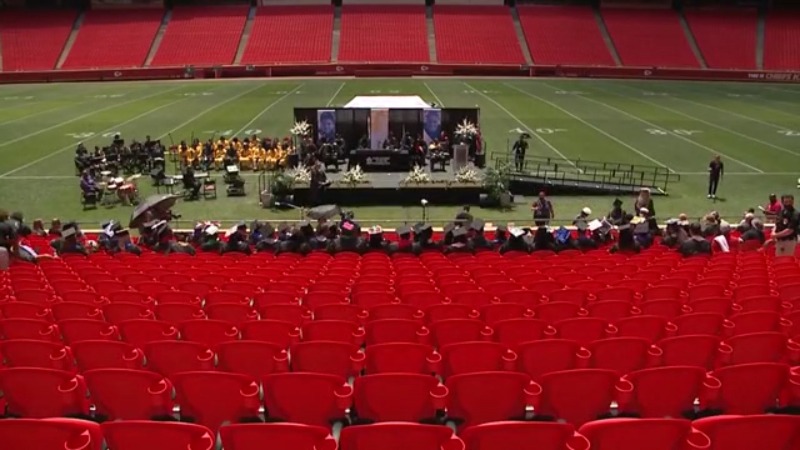 Students from the Kansas City Public Schools district became the first to receive their diplomas at the home of the AFC Champion Kansas City Chiefs.

“Pomp and Circumstance” played with pride on a hot Thursday afternoon, as the roll of graduates from Paseo Academy for the Performing Arts was called.

The wow factor of graduating on the field at Arrowhead Stadium isn’t lost on Paseo students, including class president Marquis Williams. He, as well as other Pirate graduates, said they appreciate being rewarded by district leaders, after surviving a tough year that included the challenge of remote learning.

“It’s not every day you get to graduate at the Chiefs stadium – where magic happens. History is being made here,” Williams smiled. “It’s hard to do online school. It’s something to get used to. I believe it helped us prepare for adult life, being more responsible. If you know you have to be in this case at this time, you be there. You take responsibility for your own education.”

Close to 50 new graduates walked the stage, which rested at the stadium’s 50-yard line. Dr. Mark T. Bedell, KCPS superintendent, said the Chiefs organization was excited to support these ceremonies, seven of which are scheduled to happen between Thursday and Friday.

“So many of our students have not have ever had an opportunity to be on this field outside of seeing it on TV. To be able to have your commencement and have that be part of your memory for the rest of your life, it was a no-brainer for us,” Bedell said.

One year ago, most high school graduation ceremonies were either cancelled or scaled down to small gatherings due to COVID-19 restrictions. Students from this academy for the performing arts said it was exciting to gather as a large group and collect their rewards.

“We didn’t even have a prom because of COVID.  Last year’s class didn’t either. I feel bad for them not being able to graduate, but I also don’t feel too bad because we get to graduate,” Guadelupe “Lou” Rodriguez, Paseo High Valedictorian, said.

Thursday included three graduation ceremonies at Arrowhead, including Paseo Academy, Southeast High and Lincoln Prep. KCPS’ four remaining high schools are slated to hold their graduation commencement on Friday at the home of the Chiefs.

In a since-deleted tweet responding to a question about a potential contract extension for Kansas City Chiefs safety Tyrann Mathieu, Mathieu tweeted that he's "probably not" going to get a new deal in … END_OF_DOCUMENT_TOKEN_TO_BE_REPLACED

KANSAS CITY, Mo. — A manhole left uncovered is the source of concern after a woman damaged her car in Kansas City. The single-car crash happened at 11th Street and Tracy Avenue during the busy … END_OF_DOCUMENT_TOKEN_TO_BE_REPLACED

Kansas City, Missouri's COVID-19 emergency order was set to expire at the end of the month. But Mayor Quinton Lucas made it clear Friday that private businesses can still set their own rules.Any … END_OF_DOCUMENT_TOKEN_TO_BE_REPLACED

KANSAS CITY, MO (KCTV/AP) — All restrictions meant to slow the spread of the coronavirus were being rescinded as of midday Friday in Kansas City, Missouri, following guidance from the U.S. Centers for … END_OF_DOCUMENT_TOKEN_TO_BE_REPLACED