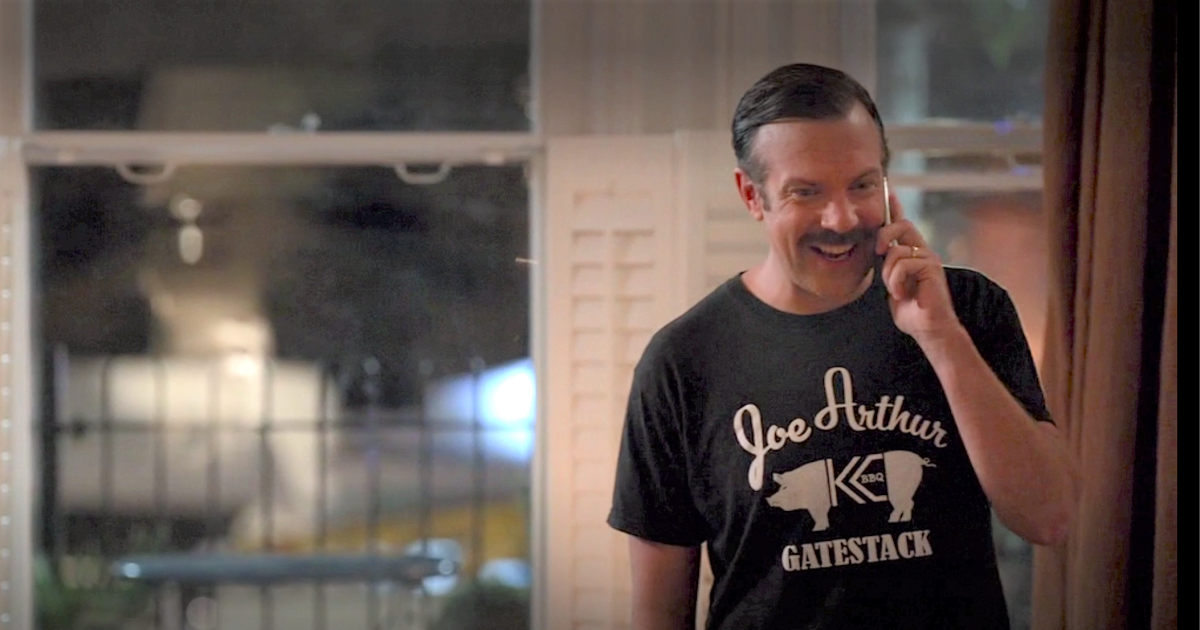 Since the success of the critically acclaimed 2020 series “Ted Lasso,” Americans have universally agreed on two things.

First, the sports comedy about an American football coach who is recruited to coach a professional soccer team in England is the feel-good show many of us needed to get through 2020. Ted’s wholesome disposition and inspirational locker room pep talks were a bright light in a dark year.

Secondly, actor Jason Sudeikis bears some serious resemblances to the title character he plays. Both grew up in the Kansas City area and are enthusiastic city ambassadors. And seeing Sudeikis in such an endearing role means a lot to Kansas City, where fondness for the Overland Park native runs deep.

Jason Sudeikis is a treasure. And the pride he takes in this city is only surpassed by the pride it takes in him.

If we were all more like Jason Lasso. Or Ted Sudeikis. They seem to be one in the same. https://t.co/IE5QEPLGGh

Season 2 of “Ted Lasso” premiers on Apple TV+ this Friday and you could say Kansas City couldn’t be more thrilled to have yet another season about the corny yet lovable Kansas football coach who waxes poetic about Arthur Bryant’s barbecue sauce and says things like “that fella looked like a kitty cat when he gets spooked by a cucumber.”

“I think a big part about being funny in a successful way is being a good listener,” Sudeikis told KCUR’s Up To Date last year.

And a good listener, Sudeikis is. Some of Ted’s charming sayings are inspired by Sudeikis’ high school basketball coach at Shawnee Mission West. His unbounding positivity is based in part on Sudeikis’ dad. And his midwestern drawl is meant to bring to mind the kind of accent you’d hear in Kansas.

“I try and surround myself with people that have that benevolence in their DNA,” he says.

In this part of the Midwest, Ted Lasso either reminds you of someone you know — or wish you did.

finished my third watch of Ted Lasso season 1 tonight and it just keeps getting better on each rewatch…excited for season 2 next week!!!

Our WiFi is out on this the day after our wedding in which our sole plan was to lay around and stream Ted Lasso. The worst has happened.

Contrary to what people might think, Sudeikis doesn’t like thinking of the show as an antidote for the times we’re living in. It was conceived back in 2015 and Sudeikis almost takes offense to the idea that the show is more relevant now than it would have been six years ago.

Just over a week ago, Ted Lasso scored a record-setting number of 20 Emmy nominations. But last year, Sudeikis would have traded the success of the show if it meant his kids could hang out with their friends at school. Or he’d be able to go on date nights with his partner. Or at the very least, high-five his friends.

Megan and I are rewatching @TedLasso. Its very interesting for her, since she basically went to all the same schools as @jasonsudeikis

The second season of ‘Ted Lasso’ premieres on Apple TV+ this Friday, July 23, with one episode dropping each week for 12 weeks.

In a since-deleted tweet responding to a question about a potential contract extension for Kansas City Chiefs safety Tyrann Mathieu, Mathieu tweeted that he's "probably not" going to get a new deal in … END_OF_DOCUMENT_TOKEN_TO_BE_REPLACED

KANSAS CITY, Mo. — A manhole left uncovered is the source of concern after a woman damaged her car in Kansas City. The single-car crash happened at 11th Street and Tracy Avenue during the busy … END_OF_DOCUMENT_TOKEN_TO_BE_REPLACED

Kansas City, Missouri's COVID-19 emergency order was set to expire at the end of the month. But Mayor Quinton Lucas made it clear Friday that private businesses can still set their own rules.Any … END_OF_DOCUMENT_TOKEN_TO_BE_REPLACED

KANSAS CITY, MO (KCTV/AP) — All restrictions meant to slow the spread of the coronavirus were being rescinded as of midday Friday in Kansas City, Missouri, following guidance from the U.S. Centers for … END_OF_DOCUMENT_TOKEN_TO_BE_REPLACED