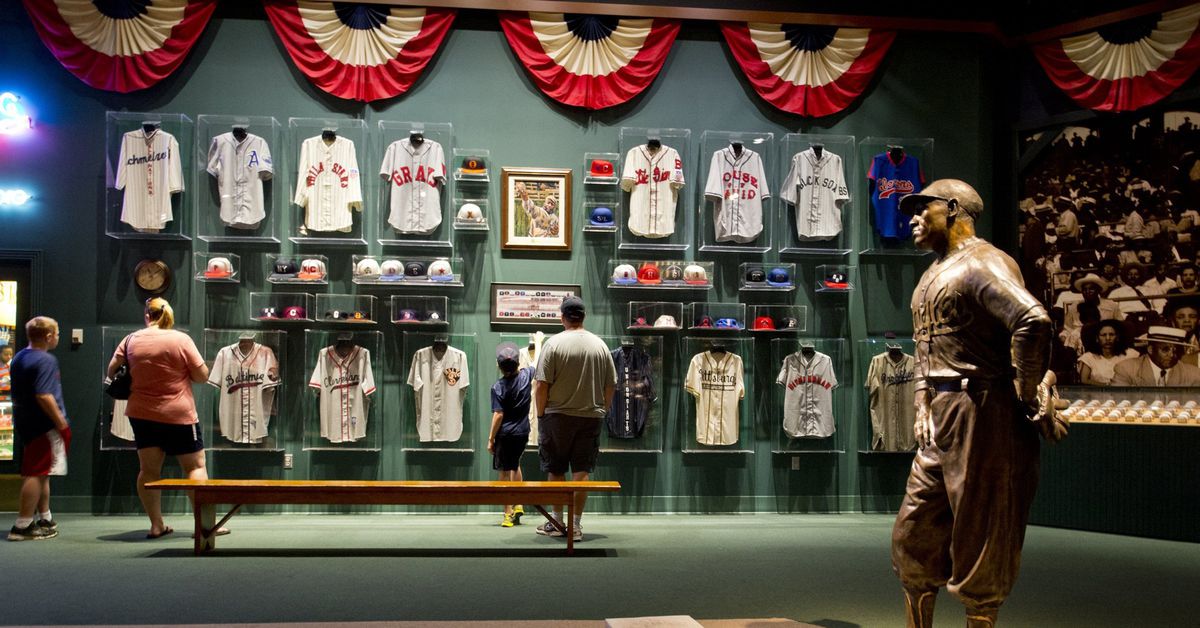 A couple of years ago my fiancé and I went on a road trip for a class she needed to take. We decided to make it a baseball road trip. We scheduled a minor league game, got tickets for Kansas City Royals and St. Louis Cardinals home games, visited a few different craft soda shops, before finishing our trip with a night game at Wrigley Field.

It was a great trip from beginning to end.

As great as everything I’ve mentioned ended up being there was one stop nestled in the middle of the trip that stole the show. I thought it would be cool, but I wasn’t quite prepared for how easily the Negro Leagues Baseball Museum would steal the show.

The Museum is situated in downtown Kansas City, Missouri. It’s located in the 18th and Vine District, in the same building as the American Jazz Museum. It’s fitting that the Negro Leagues Baseball Museum would share space with a museum dedicated to jazz. If ever there were two American artforms that were shaped and molded by the immense contributions of African-Americans, it’s baseball and jazz. The location of 18th and Vine is famous for its role in the development of jazz. Specifically, the American style of jazz is credited with having been birthed at the various nightclubs that made up the area in the 1920s (this distinction is shared with New Orleans, which, you can’t go wrong either way.)

All around the museums, there are reminders of what those museums represent. There are murals of the Kansas City Monarchs teams of old as well as a mural of Buck O’Neil that takes up the entirety of one side of a four-story building. The buses that go by cause the jazz notes strung up throughout the streets to flutter and seem as if they are about to spring to life. Everywhere you look and every step you take there is a reminder of how important this neighborhood, and Kansas City specifically, is to black culture.

The Negro Leagues Baseball Museum is exactly in line with the city in which it resides.

Within its walls, there are beautifully preserved relics of the past and well-thought-out exhibits that impart to every visitor the plight and importance of the Negro Leagues to not just baseball history, but black culture and the history of America. There’s also ugliness in the museum, a constant reminder of the hardships that black athletes faced when they were segregated from their white peers. There is the constant reminder that they were good enough to play alongside their counterparts, but never allowed to. The rise and fall of the Negro Leagues and black baseball is displayed for all to see.

The part of the history of the Negro Leagues that never gets enough attention is the after effect that integration had on black-run businesses and communities. Seeing players of color openly competing with white players was a joyous triumph. However, that triumph ultimately came at the expense of the Negro Leagues and the businesses that had thrived in communities of color thanks to the success of the various Negro Leagues franchises. Major League Baseball integrated on their terms and left black team owners out in the cold. For years communities of color suffered as a result of the damage MLB wrought through their method of integration.

For a time the area of 18th and Vine was in disrepair. A vibrant community neglected and rejected by society. Numerous businesses attempted to revive the District, but they did so by trying to change the District. They had no interest in the people who made up the community, or any of the surrounding communities. As soon as they realized they couldn’t make a quick-buck, these primarily white business owners left and the area took hit after massive hit.

The role that the Negro Leagues Baseball Museum has taken on came about in large part because of the disregard shown towards the 18th and Vine District by the white business owners who preceded the museum.

It’s no secret that the turnaround of the 18th and Vine District is viewed to have begun in 1990. That’s the year that the Negro Leagues Baseball Museum first opened. That was when O’Neil, Phil Dixon, and others brought their vision of honoring black baseball history to the District. Success didn’t come overnight, but the mission of the museum was clear: to showcase Negro Leagues history while allowing communities of color to take pride in what they had accomplished. This became even more evident when Bob Kendrick took over the museum in 2008 and the museum changed from more of a mission statement to a cultural watering hole.

Nowadays the museum is thriving and the surrounding communities of color definitely have a reason to be proud. The area of 18th and Vine has become a must-visit destination for anyone traveling through the area. That didn’t happen because of a gentrification project or the efforts of white business owners. It happened because a place to honor black history in baseball came into existence and once again gave the community a sense of ownership over their lives that had been missing since the days of the Monarchs taking the field.

The Negro Leagues Baseball Museum is more than just a museum, it’s history, culture, and a beacon of light for a community all rolled into one.

In a since-deleted tweet responding to a question about a potential contract extension for Kansas City Chiefs safety Tyrann Mathieu, Mathieu tweeted that he's "probably not" going to get a new deal in … END_OF_DOCUMENT_TOKEN_TO_BE_REPLACED

KANSAS CITY, Mo. — A manhole left uncovered is the source of concern after a woman damaged her car in Kansas City. The single-car crash happened at 11th Street and Tracy Avenue during the busy … END_OF_DOCUMENT_TOKEN_TO_BE_REPLACED

Kansas City, Missouri's COVID-19 emergency order was set to expire at the end of the month. But Mayor Quinton Lucas made it clear Friday that private businesses can still set their own rules.Any … END_OF_DOCUMENT_TOKEN_TO_BE_REPLACED

KANSAS CITY, MO (KCTV/AP) — All restrictions meant to slow the spread of the coronavirus were being rescinded as of midday Friday in Kansas City, Missouri, following guidance from the U.S. Centers for … END_OF_DOCUMENT_TOKEN_TO_BE_REPLACED