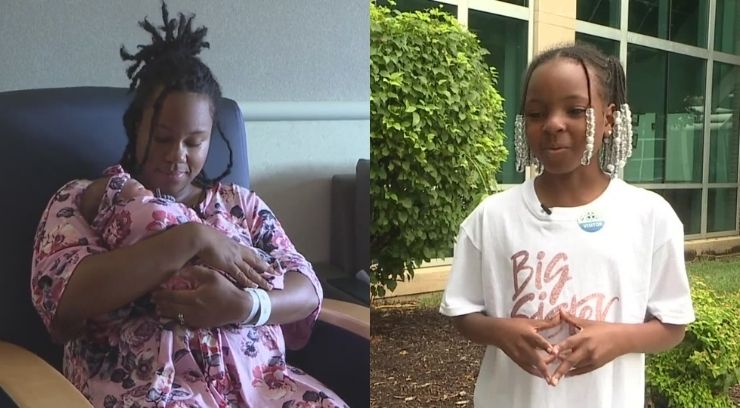 LEE’S SUMMIT, Mo. — A Belton family welcomed their new baby girl into the world more than a week early, at home and with some surprising help.

When any baby is born, it’s a miracle. But this birth could take the cake. A 9-year-old helped deliver her baby sister at home. Her mom, a nurse at St. Luke’s South, coached her through it.

“We may have a doctor on our hands,” Caleb Gunn said. “Already delivering babies at 9! Let’s go, Aakayla!”

“It was fun. She looked really pretty,” Aakayla said.

Angelica Gunn started feeling contractions Monday. She called her husband to rush home, but Caleb got stuck in traffic.

Within two pushes, Aubree made her debut into the world. Aakayla caught her.

“She told me to go grab a towel, and don’t hold Aubree so hard, and give her to mommy,” Aakayla said.

Angelica’s sister was on one phone; paramedics were on the other.

‘We’re having a road baby’: Tennessee woman gives birth on side of interstate

Thankfully, Angelica herself is a nurse and certified doula.

“I’m happy, just blessed,” Angelica said. “I’m glad that we’re both OK and that my daughter’s OK, and she’s not traumatized by the whole thing. She’s pretty excited about it.”

Aakayla has a 4-year-old brother but can’t wait to hit the mall with her baby sister.

Dad described his daughter as a total girly girl.

“I mean, she’s scared to touch worms,” Caleb said laughing, “So just to look at some things that she looked at is just amazing.”

The amount of bling on Aakayla’s new “Big Sister” shirt matcher her bravery.

“I think she’ll really cherish this for the rest of her life,” Angelica said.

Even more special, the Gunns have battled fertility issues.

“We had our nurse on our side, my little angel Aakayla,” Caleb said.

They have three babies in heaven and now three here on earth.

“It’s like heaven looking into her eyes,” Caleb said.

While holding her newborn tight, Gunn remembers her three miscarriages. She started a support group for other moms and families called The Lost Butterflies.

In a since-deleted tweet responding to a question about a potential contract extension for Kansas City Chiefs safety Tyrann Mathieu, Mathieu tweeted that he's "probably not" going to get a new deal in … END_OF_DOCUMENT_TOKEN_TO_BE_REPLACED

KANSAS CITY, Mo. — A manhole left uncovered is the source of concern after a woman damaged her car in Kansas City. The single-car crash happened at 11th Street and Tracy Avenue during the busy … END_OF_DOCUMENT_TOKEN_TO_BE_REPLACED

Kansas City, Missouri's COVID-19 emergency order was set to expire at the end of the month. But Mayor Quinton Lucas made it clear Friday that private businesses can still set their own rules.Any … END_OF_DOCUMENT_TOKEN_TO_BE_REPLACED

KANSAS CITY, MO (KCTV/AP) — All restrictions meant to slow the spread of the coronavirus were being rescinded as of midday Friday in Kansas City, Missouri, following guidance from the U.S. Centers for … END_OF_DOCUMENT_TOKEN_TO_BE_REPLACED