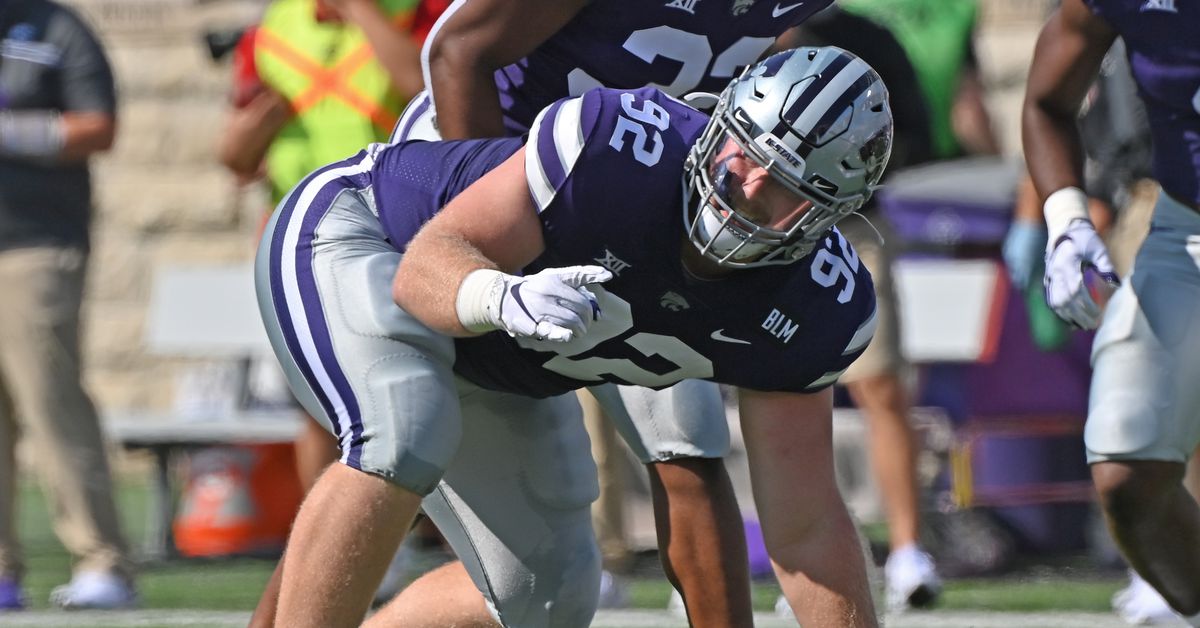 NOTE: Kansas State has elected to advance players’ classification even though the 2020 season did not affect eligibility. Those who wish to take advantage of this extra year will be listed as a (“super”) senior again after their original eligibility would have been exhausted.

Nicholas Randall Allen (b. Nov. 5, 1999) is a linebacker from Blue Valley High School Southwest in Overland Park majoring in finance who redshirted in 2018 and saw action in all 13 games of 2019. He projects as a reserve linebacker and special teams player in 2021.

Allen totaled a pair of tackles on punt coverage while being an integral part of K-State’s 2019 blocking unit for its four kickoff-return touchdowns. He also had a pass breakup as a reserve linebacker against Bowling Green and earned first-team Academic All-Big 12 honors.

Allen then played in nine games in 2020, primarily on special teams; set a career high with two tackles as a reserve linebacker at Iowa State; and finished the season as a first-team Academic All-Big 12 performer.

He also had a huge recovery of a punt blocked by AJ Parker that set up a Deuce Vaughn touchdown to tie the score at 35 in an eventual victory over Oklahoma in Norman.

Allen played at Blue Valley Southwest under head coach Anthony Orrick and was named to the Kansas Football Coaches Association (KFBCA) Top 11 team as one of the best 11 players in the state of Kansas among all classes in 2017.

He earned first-team all-state honors as a senior from KFBCA, The Topeka Capital-Journal and The Wichita Eagle, while he also was an honorable mention pick from the latter two organizations as a junior.

Allen was named the 2017 Eastern Kansas League (EKL) Defensive Player of the Year after totaling 151 tackles, 21 tackles for loss and 3.5 sacks.

He also was named a first-team All-Metro performer by the Star and was a finalist for the Buck Buchanan Award as the most outstanding lineman or linebacker among big-class schools in the Kansas City area.

“It’s been my dream,” he told the Star. “I grew up in Kansas my whole life, and I always loved K-State and the color purple.”

Allen had opportunities to go the community college route on a scholarship, or he could have walked on at Oklahoma State. But the Wildcats gave him a clear picture of the future.

“I just told myself if I were to get a scholarship to anywhere that I would consider it until I got a scholarship or (preferred walk-on offer) from K-State,” he said.

In a since-deleted tweet responding to a question about a potential contract extension for Kansas City Chiefs safety Tyrann Mathieu, Mathieu tweeted that he's "probably not" going to get a new deal in … END_OF_DOCUMENT_TOKEN_TO_BE_REPLACED

KANSAS CITY, Mo. — A manhole left uncovered is the source of concern after a woman damaged her car in Kansas City. The single-car crash happened at 11th Street and Tracy Avenue during the busy … END_OF_DOCUMENT_TOKEN_TO_BE_REPLACED

Kansas City, Missouri's COVID-19 emergency order was set to expire at the end of the month. But Mayor Quinton Lucas made it clear Friday that private businesses can still set their own rules.Any … END_OF_DOCUMENT_TOKEN_TO_BE_REPLACED

KANSAS CITY, MO (KCTV/AP) — All restrictions meant to slow the spread of the coronavirus were being rescinded as of midday Friday in Kansas City, Missouri, following guidance from the U.S. Centers for … END_OF_DOCUMENT_TOKEN_TO_BE_REPLACED