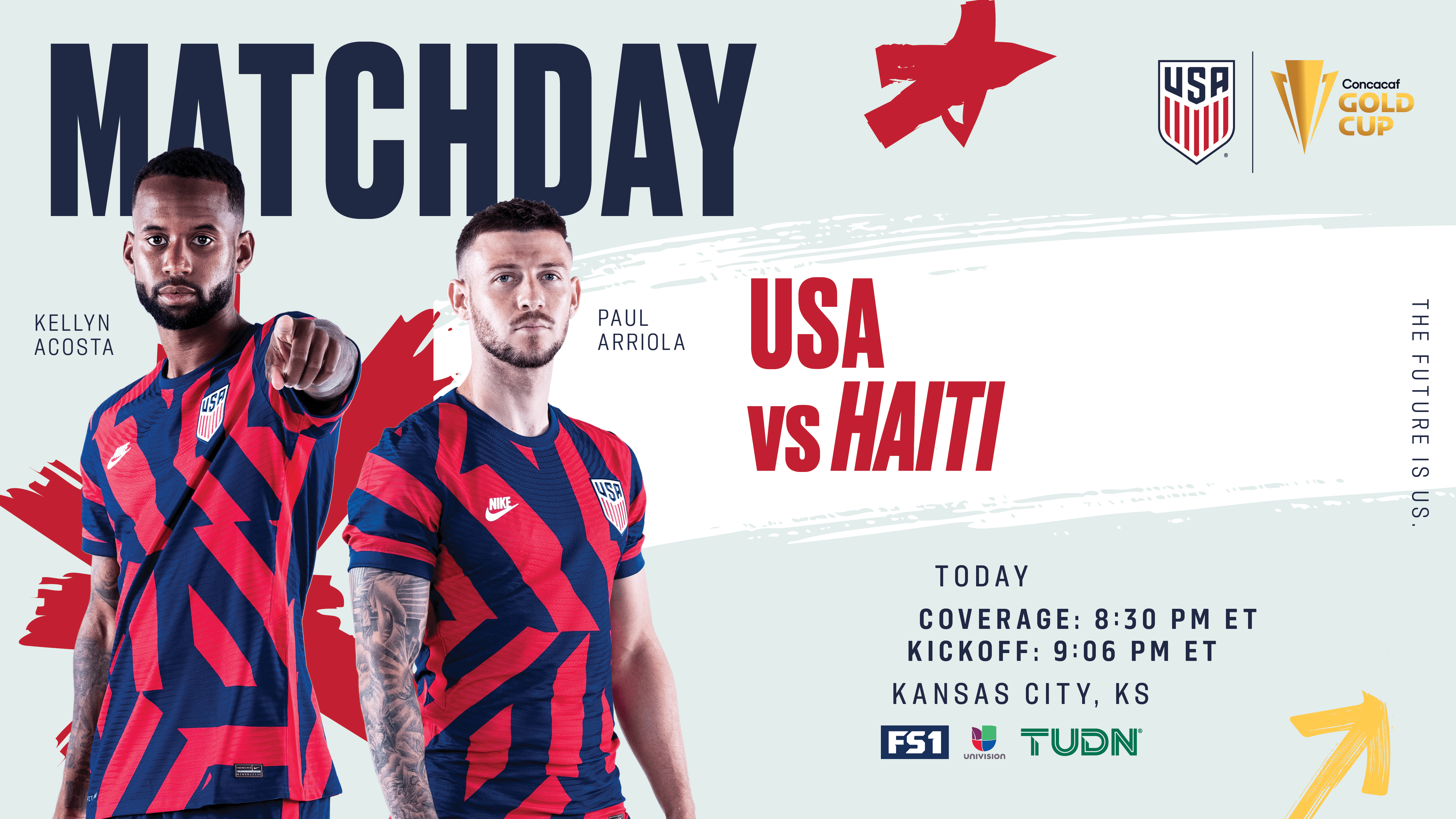 CHICAGO (July 10, 2021)—The U.S. Men’s National Team will launch its quest for a seventh confederation championship when it opens the 2021 Concacaf Gold Cup against Haiti on Sunday, July 11 in Kansas City, Kan.

Coverage from Children’s Mercy Park begins at 9 p.m. ET on FS1, Univision and TUDN. Fans can follow the USMNT during the tournament on Twitter (@USMNT), Instagram (@USMNT), Facebook and the official U.S. Soccer App.

WHAT IS THE GOLD CUP?

Placed in Group B, the U.S. opens the tournament against 2019 semifinalists Haiti on July 11, faces Martinique on July 15 and wraps up the group stage against Canada on July 18. The top two teams in each of the four groups advance to the quarterfinals (July 24-25 in Arlington, Texas and Glendale, Ariz.). The semifinals are scheduled for July 29 in Austin and Houston, before the championship match on Aug. 1 in Las Vegas.

In the middle of a jam-packed 2021 schedule, the Gold Cup provides an opportunity for the USMNT to pick up its second regional trophy of the summer. In June, the USA clinched the inaugural Concacaf Nations League title with a thrilling extra-time victory against Mexico, and now the U.S. will look to take home more hardware at the confederation championship.

This year’s competition takes on additional importance as the USMNT’s final gathering before 2022 FIFA World Cup qualifying kicks off in September. The tournament will provide invaluable experience against Concacaf opposition in a high-pressure environment as 12 players have the chance to compete in official competition for the USA for the first time.

Nineteen of the 23 players on the Gold Cup roster weren’t a part of the USMNT’s Nations League roster, providing an almost entirely new group of players exposure to high-level Concacaf competition. This experience is essential as World Cup qualifying kicks off in the fall, especially with a new format that includes more games over a shorter period of time. Eight teams will compete for three berths to the World Cup during the course of seven months rather than 18, and four of five international windows will include teams playing three matches in seven days, meaning depth will be critical.

Despite arriving in Kansas City with a roster that averages just under 25 years of age, the USMNT brings six players who have Gold Cup titles under their belts: Brad Guzan and Sean Johnson (2 each), Kellyn Acosta, Paul Arriola, Cristian Roldan, and Gyasi Zardes (1 each). Three more bring prior experience at the tournament: Reggie Cannon, Jonathan Lewis and Walker Zimmerman.

Midfielder Sebastian Lletget is the only USMNT player to appear in all 11 of the team’s matches over the last two calendar years and is tied for the team’s goal-scoring lead this year with three tallies.

BACK HOME IN KC

Born and raised in Overland Park, Kan., forward Nicholas Gioacchini is returning home for the first time since the age of eight, when his family moved to Italy. After a spell in Maryland, the Gioacchinis moved back to Europe and Nicholas launched his pro soccer career with Paris FC in 2017 before moving to Caen, his current club, the following year. The forward made his international debut and scored his first two USA goals in the 6-2 win against Jamaica in November and now will look to make his mark during the Gold Cup group stage in his hometown.

CANNON AIMS FOR ANOTHER TROPHY

Defender Reggie Cannon is fresh off of a big June with the USMNT, helping the team lift the Concacaf Nations League trophy and scoring his first international goal in the friendly against Costa Rica. After playing a key role for the USA during the 2019 Gold Cup, Cannon made the move overseas to Portuguese club Boavista and is confident that he’s raised his game as he aims for his second regional title of the summer.  Listen to the USMNT defender speak with Jordan Angeli and Charlie Davies on this week’s episode of The U.S. Soccer Podcast.

The USMNT played four matches during the June international window, attempting to simulate the cadence of the new World Cup qualifying format. Sebastian Lletget struck first for the USA vs. Switzerland in the team’s first match, but the U.S. fell 2-1. In the Nations League, a hard-fought 1-0 semifinal win vs. Honduras set the stage for an instant classic USA-Mexico match in the Concacaf Nations League Final, a dramatic 3-2 victory.

The USMNT capped off the international break with an emphatic 4-0 win against Costa Rica that saw both Cannon and forward Daryl Dike net their first international goals. With the result, the USA has won its last 10 matches against Concacaf opponents, a promising trend heading into the confederation championship.

Gold Cup roster members Kellyn Acosta, Cannon, Lletget and Jackson Yueill were all a part of the USA’s Nations League squad, while Dike and Zimmerman both appeared in the friendly vs. Costa Rica. Hoppe was a part of the USMNT matchday squad vs. Switzerland.

USMNT AT THE GOLD CUP

In a since-deleted tweet responding to a question about a potential contract extension for Kansas City Chiefs safety Tyrann Mathieu, Mathieu tweeted that he's "probably not" going to get a new deal in … END_OF_DOCUMENT_TOKEN_TO_BE_REPLACED

KANSAS CITY, Mo. — A manhole left uncovered is the source of concern after a woman damaged her car in Kansas City. The single-car crash happened at 11th Street and Tracy Avenue during the busy … END_OF_DOCUMENT_TOKEN_TO_BE_REPLACED

Kansas City, Missouri's COVID-19 emergency order was set to expire at the end of the month. But Mayor Quinton Lucas made it clear Friday that private businesses can still set their own rules.Any … END_OF_DOCUMENT_TOKEN_TO_BE_REPLACED

KANSAS CITY, MO (KCTV/AP) — All restrictions meant to slow the spread of the coronavirus were being rescinded as of midday Friday in Kansas City, Missouri, following guidance from the U.S. Centers for … END_OF_DOCUMENT_TOKEN_TO_BE_REPLACED