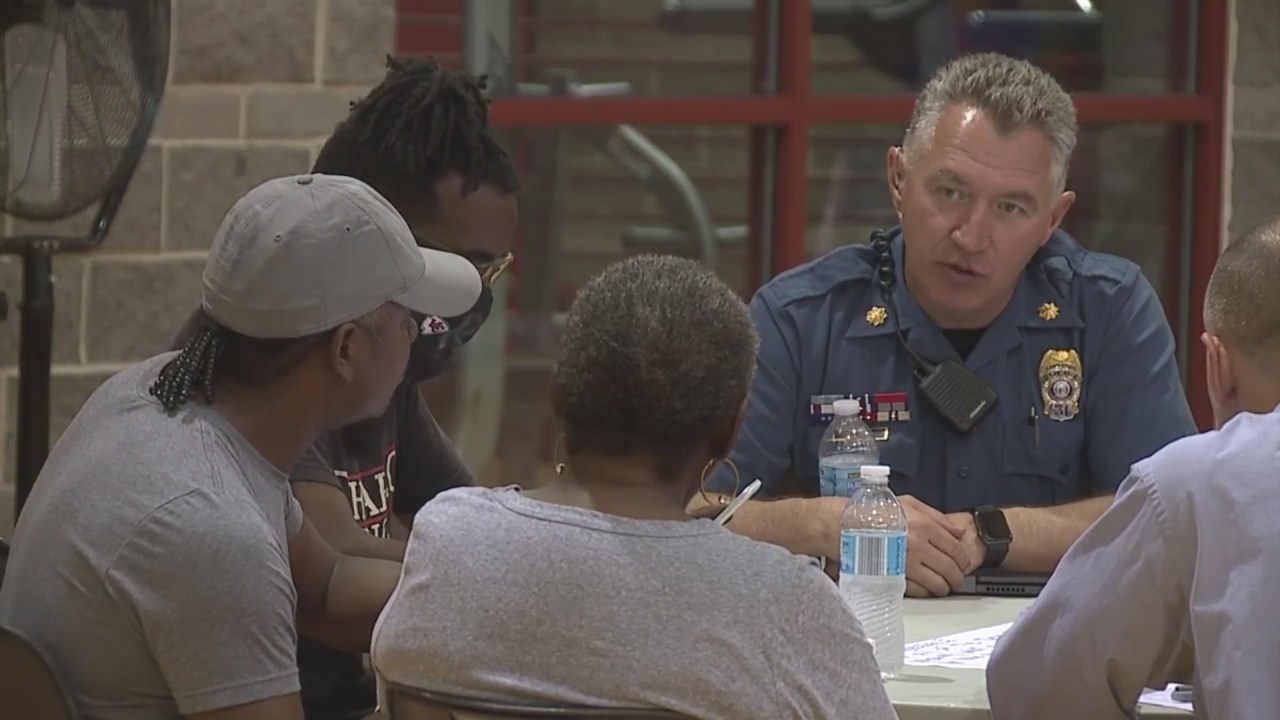 KANSAS CITY, Mo. — Kansas City police and residents came together Tuesday night for a listening session in the 18th and Vine district.

The Center for Conflict Resolution help facilitate the discussion in small groups.

John James, president of the Wendell Phillips Downtown East neighborhood association, said he’s been to several meetings between the police and the community in his 12 years of living in the area.

“At this point, we’ve been talking for years,” James said.

This meeting was designed a little differently than in the past. In small groups with a facilitator from the Center for Conflict Resolution at each table, the police and community members answered questions in 8-minute sessions and presented to the entire group.

The first part of the discussion was about feelings, and the second part was focused on problem solving.

“They know they’re heard,” said Annette Lantz-Simmons from the center. “We write down what they say. They can see that we’re capturing it, so it’s a much more intimate process.”

The answers were also posted on the walls for everyone to see.

Henry Service, who owns the Historic Lincoln Building, said he would like to see more community collaboration since he said crime isn’t limited to 18th and Vine.

“The jazz district is literally the safest entertainment district in Kansas City,” Service said. “We don’t get anywhere near the crime they get in Westport and some of these others.”

Data from KCPD shows Central Patrol, the division that services 18th and Vine, sees fewer homicides than some divisions in the city.

Police hope to host other meetings like this in other parts of the city.

“Occasionally, we lose sight of the human element because of the nature of the things we have to deal with over and over. Hopefully this brings them back in,” Maj. Scott Simons from Central Patrol Division said.

For James, he hopes the other meetings will include more of the leadership in the community to help strategize and work toward solutions.

“What we need is the leaders to come together to create some type of task force on the issue because we have a city issue not an 18th and Vine issue,” James said.

In a since-deleted tweet responding to a question about a potential contract extension for Kansas City Chiefs safety Tyrann Mathieu, Mathieu tweeted that he's "probably not" going to get a new deal in … END_OF_DOCUMENT_TOKEN_TO_BE_REPLACED

KANSAS CITY, Mo. — A manhole left uncovered is the source of concern after a woman damaged her car in Kansas City. The single-car crash happened at 11th Street and Tracy Avenue during the busy … END_OF_DOCUMENT_TOKEN_TO_BE_REPLACED

Kansas City, Missouri's COVID-19 emergency order was set to expire at the end of the month. But Mayor Quinton Lucas made it clear Friday that private businesses can still set their own rules.Any … END_OF_DOCUMENT_TOKEN_TO_BE_REPLACED

KANSAS CITY, MO (KCTV/AP) — All restrictions meant to slow the spread of the coronavirus were being rescinded as of midday Friday in Kansas City, Missouri, following guidance from the U.S. Centers for … END_OF_DOCUMENT_TOKEN_TO_BE_REPLACED