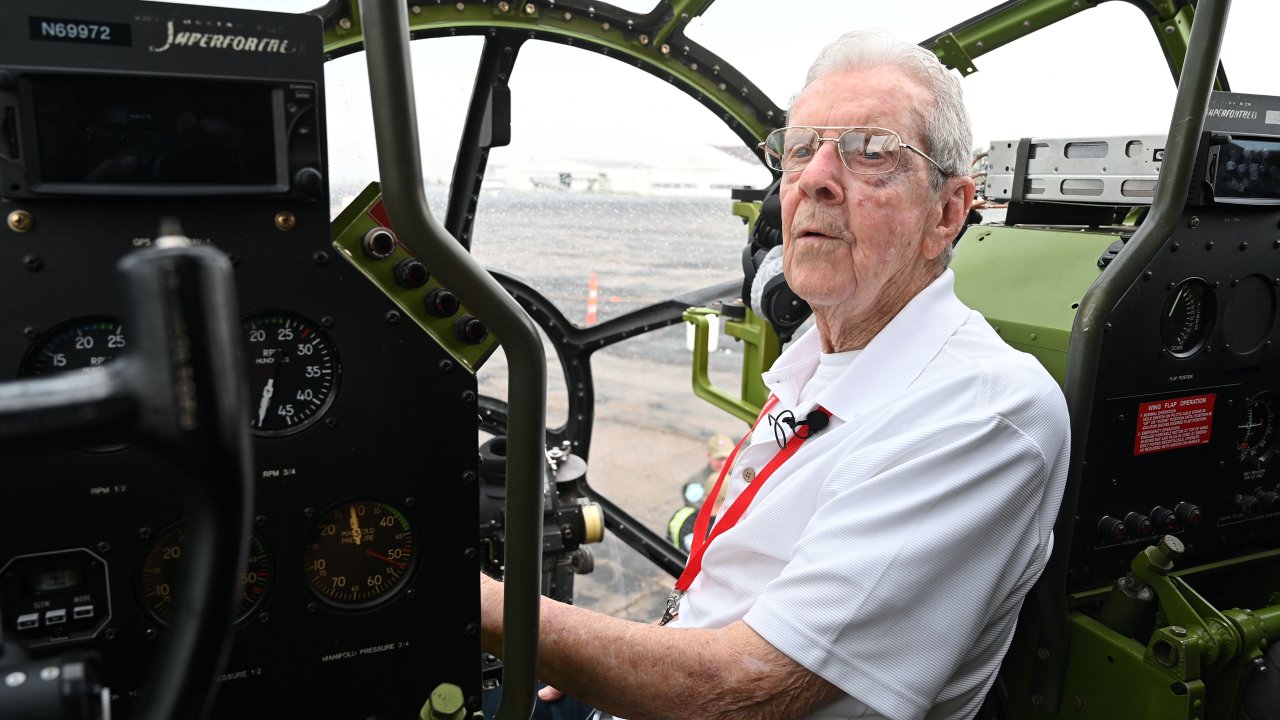 TOPEKA (KSNT) – A local 100-year-old bombardier got the chance to step onto a B-29 super fortress plane Thursday for the first time since he left the Army.

Thomas Kugler, a Pennsylvania native, enlisted in the U.S. Army at age 20. That’s what brought him to Kansas. He now resides in Lawrence.

READY FOR TAKEOFF: Thunder Over the Heartland Air Show landing in Topeka this weekend

As planes make their way to the Thunder Over the Heartland Air Show in Topeka, Kugler was given the chance to ride one of the planes created during wartime. The ‘Doc’ B-29 never went to war. Similarly, Kugler trained in Platt and Hays, but never saw combat.

The B-29 he stepped on is one of the only two remaining with the ability to fly. According to Kugler, he trained on mostly B-17 and B-24 aircrafts, but he did train on a B-29 a handful of times. All of these bomber super fortresses have a unique sensation that he said he had been chasing for the last several decades.

“When we hit the runway and I knew when he throttled up and I got the rumble of the wheels and then I felt the airplane lift oh, I enjoyed that, it was exciting,” Kugler said.

As the plane landed, he turned to the person sitting next to him and said it was just how he remembered.

“I missed that feeling. I never got it in a commercial airplane but I had it in this airplane,” Kugler said. “It was better than I remembered it.”

Kugler will celebrate his 101st birthday in August. Click here for information about the super fortress.

In a since-deleted tweet responding to a question about a potential contract extension for Kansas City Chiefs safety Tyrann Mathieu, Mathieu tweeted that he's "probably not" going to get a new deal in … END_OF_DOCUMENT_TOKEN_TO_BE_REPLACED

KANSAS CITY, Mo. — A manhole left uncovered is the source of concern after a woman damaged her car in Kansas City. The single-car crash happened at 11th Street and Tracy Avenue during the busy … END_OF_DOCUMENT_TOKEN_TO_BE_REPLACED

Kansas City, Missouri's COVID-19 emergency order was set to expire at the end of the month. But Mayor Quinton Lucas made it clear Friday that private businesses can still set their own rules.Any … END_OF_DOCUMENT_TOKEN_TO_BE_REPLACED

KANSAS CITY, MO (KCTV/AP) — All restrictions meant to slow the spread of the coronavirus were being rescinded as of midday Friday in Kansas City, Missouri, following guidance from the U.S. Centers for … END_OF_DOCUMENT_TOKEN_TO_BE_REPLACED